From Tokyo to Timbuktu, SA’s scams are boundless

From Tokyo to Timbuktu, SA’s scams are boundless

Don’t think this sort of behaviour is particular to Tokyo Sexwale. Scamming is a national ANC pastime 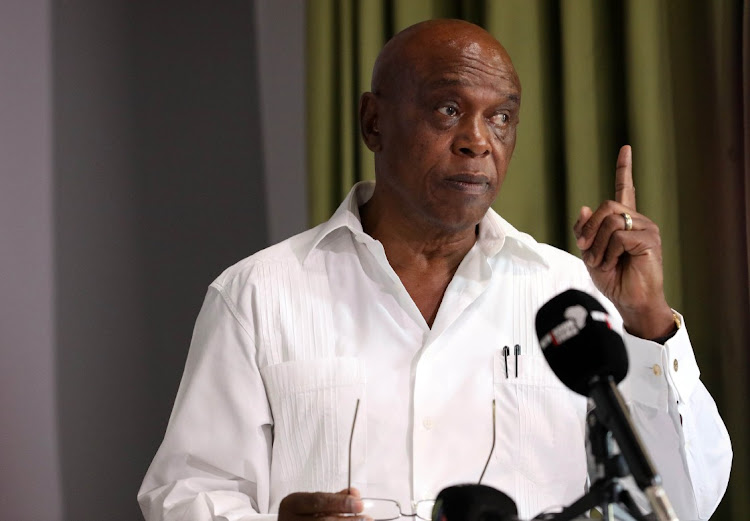 “We’ll scam the scammers, Morty. And we’re gonna take them for everything they’ve got,”  Rick Sanchez sums up Zigerion scammers, “the galaxy’s most ambitious, least successful con artists”.

Well, look what the cat dragged in. One Tokyo Sexwale. And along with him, by all accounts, a great deal of mud too. Now everything is covered in it.

He returned from the wilderness to deliver some fantastical tale of gold gone missing, like the bedraggled pirate who stumbles into a bar raving about lost treasure, with a wild look in his eyes.

It’s quite something, watching the scammers scam each other. Very entertaining.

The Treasury says he was scammed. But then this is the land of scams. And the bar he walked into, the drinking den for myriad conspiracy nuts, all high on bullshit. So, the least you can say is the man knows how to choose a venue.

Not long ago, Gwede Mantashe, in his capacity as minerals and energy minister, told a gathering of investors about the wonders of “hazenile” — a miracle mineral, he said, “discovered in abundance in the area between the crypte [sic] and throne room caves in the Congo [sic] Caves in the Western Cape” and which “will be crucial in the manufacturing of battery storage technologies”.

Hazenile doesn’t exist, of course. It was an April Fools joke the minister took seriously. Our battery storage technologies are poorer for it. So it makes sense the ANC chair has been dead quiet about Sexwale’s revelations, as he couldn’t tell coal production from alchemy.

More recently Mantashe told the Zondo commission the ANC had no cadre deployment policy — a scam of its own sort, because it’s all there in black and white, in the ANC’s own documents. Exactly who he was trying to fool is anyone’s guess.

It’s quite something, watching the scammers scam each other. Very entertaining. But don’t make the mistake of thinking this sort of behaviour is particular to Sexwale. Scamming is a national ANC pastime.

We have trains that don’t fit on the tracks, chosen by engineers who aren’t engineers. Eskom pays R26 for a roll of toilet paper. There are Covid-19 scooters in the Eastern Cape the Keystone Cops would have been proud of. Hell, a national key point, in the form of a military airstrip, was once turned into a wedding reception area.

Virodene. Now there was some weapons-grade pseudoscience. An industrial solvent sold as a cure for HIV/Aids. You’d say it was hackneyed, so far as quackery goes, if it wasn’t so serious.

No, the ANC has done it all. It’s more likely professional scammers look to the ANC for inspiration before they consider the party an actual target. So frankly, why everyone is so worked up about Sexwale boggles the mind. This is the kind of thing the ANC revels in.

Of course, some of it depends on how you define “scam”. If you were ungenerous, you might say the ANC itself is a scam. Certainly there is a bottomless gulf between its snake oil promises of such things as a fourth industrial revolution and its ability to keep the lights on.

If you were being generous, on the other hand, it’s still hard to understand where hundreds of billions of rand went, other than into the ANC’s pockets, in return for little more than national decay. The Zondo commission is running the numbers. The final sum will feature a lot of zeros.

Is the ANC a pyramid scheme? Now there’s an interesting question. It seems to work like one: recruit someone to it, loot whatever you can get your hands on, but always pay a tithe upwards. And always promise the world. Until you get to the top, where, according to testimony, the state security services will personally deliver bags packed with millions in cash to the president’s doorstep.

No wonder everyone wants in.

You can put someone in charge of the SABC who should be in a mental institution. You can have a national airline designed to make a loss, not a profit, and pretend it is a great business model. You can even con Absa into coughing up R1m for a hagiography of the president.

Remember that time a fake sign language interpreter stood on a world stage, not more than two metres from the American president, gesticulating rubbish on international television?

There is a scam for every occasion. Nothing is sacred. Nelson Mandela’s funeral was scam. The scammers promised to deliver a stately affair, instead they robbed the relevant fund dry.

In between we are awash in “fake news”. Some of it born of malicious intent, some of it born of ineptitude. There is “fake analysis” too. The grand ANC scam is so powerful, it has intellectually captured all comers.

The pyramid scheme needs to be better staffed, they argue. So many people want the scam to work, they have tortured their thinking into compliance, on one level or another. Half of what you read is a scam, intentional or not. A New Dawn? Scam.

No-one got richer off Sexwale’s pitch. And so he is out on his own.

Perhaps religion holds some respite. And then you recall people are walking about spraying Doom into their mouths or on all fours eating grass. What ever happened to Shepherd Bushiri?

The private sector relentlessly scams people, too. Between cellphone companies and call charges, and banks and surcharges, you feel almost every product on offer is designed to fleece you of your money in some shape or form.

It’s tempting to say the real victims are the people, but frankly, a lot of them seem to be in on the game. You watch the way so many ANC representatives, utterly out of their depth, so desperately want to believe they are anything but incompetent, and you wonder: is it possible to be scammed, really, in SA?

If the whole thing is a scam, well then, who are you fooling? In theory, one might look back on it all in 50 years’ time and laugh at how gullible everyone was. But in the moment? In the moment we all seem to be taking it seriously enough. Guess the upcoming local government elections will tell us something. Most likely that will be: long may the scam continue.

Julius Malema once wrapped half the country, certainly most of the ANC, up in a wonderful fantasy. He told of conspiracy and intrigue and a hidden national agenda to unfairly prosecute the president. And so the people tore down the National Prosecuting Authority and the Scorpions. Today, we couldn’t prosecute a murderer if he were drenched in blood, standing over his victim and chanting: “I am the murderer,” having videoed the whole affair on his phone.

But were we scammed? No-one seems to think so. No-one experienced it as a scam. Today, Malema, the nation’s greatest contemporary political quack, is peddling a new fantasy, about how Johann Rupert runs the country from a basement somewhere.

Poor old Sexwale. You almost feel sorry for him. On the sidelines, watching everyone and their brother trying to con someone out of something. Everyone needs a scam, and now he has his.

He has a lot to learn, mind you. The genius of most ANC scams is that it takes them seriously. He forgot to do some canvassing before he took to the microphone. If you want to be an ANC scammer, you need to carry the party with you. No-one likes to be blindsided. Even thieves like to know when their colleagues are planning their next hit. It’s about territory, and making sure there is something in it for you. No-one got richer off Sexwale’s pitch. And so he is out on his own. Next time.

Besides, there are plenty of other more sophisticated scams to worry about. “SA will soon be corruption free,” Cyril Ramaphosa said on November 26 2018. Scam, or just another day of ANC grifting? Time will tell. Until then, might as well buy what he is selling, the thinking goes, or his competition will take over. And they are far more professional, in the way that really counts in SA.