Be a sport, Danny, and make it your goal to spare us huge ...

Be a sport, Danny, and make it your goal to spare us huge absurdities

Jordaan says some of the best in the world want to coach our ‘huge brand’. Of course they do, we’re ranked 75th 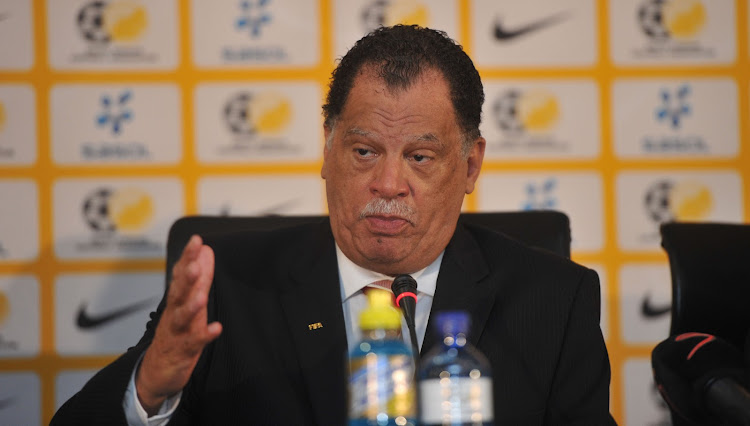 GOTTA HAND IT TO HIM Danny Jordaan's comments to the media are odd, unless they were part of a campaign to redefine English words, including changing the meaning of 'huge' from 'very large' to 'kind of shit'.
Image: Sydney Mahlangu/BackpagePix

Danny Jordaan, the president of the South African Football Association (Safa), says Bafana Bafana are a “huge brand”, not just in global football, but in all international sport, which means we now have to re-examine everything we believe about relentless mediocrity and the meaning of “huge”.

Apparently inspired by Tokyo “41 Quadrillion” Sexwale, Jordaan made the startling claim in an interview with News24’s Sport24 website last week, presumably because DesperateShill24 and EscapistFantasy24 wouldn’t take his call.

According to Jordaan, “some of the best coaches in the world” have “put up their hands” to coach Bafana Bafana because the team “remains a huge brand in the world of sport and football”.

To be fair to Jordaan, I’m sure he’s telling the truth. I can absolutely believe that some of the world’s best coaches have put up their hands, perhaps after being asked if anyone in the room knew which southern African team is currently ranked 75th in the world, or whether anyone would rather claw out their own eyeballs than coach said team.

In the interests of fairness it’s also important to point out that Bafana Bafana are ranked higher than China, which, though not well known as a footballing powerhouse, has the numbers on its side: if one in a million Chinese men have the potential to be a Lionel Messi, China is home to 700 undiscovered Messis.

I also understand that, as the boss of Safa and the person responsible for hawking a dismal brand to the world, it’s inevitable the he’d indulge in some euphemism or mild exaggeration from time to time.

Then again, perhaps it’s unwise to focus on demographics to make footballing arguments, not least because SA is now ranked lower than the Cape Verde Islands, whose population is 1% of ours and whose per capita income is about half.

In fact, when it comes to our eternally dismal men’s team, never good enough to be interesting or terrible enough to be morbidly fascinating, the less said the better.

Which is why I find Jordaan’s hyperbole so strange.

If his comments to Sport24 were part of an eccentric campaign to redefine certain English words, including changing the meaning of “huge” from “very large” to “kind of shit”, I might have understood.

I also understand that, as the boss of Safa and the person responsible for hawking a dismal brand to the world, it’s inevitable he’d indulge in some euphemism or mild exaggeration from time to time.

But to lunge so unblushingly for the absurd; to imply that our dull little team is hot property in global sport alongside the Dallas Cowboys or the Ferrari F1 team or Real Madrid; well, that just makes it all feel like a rather sad little joke.

Then again, what do I know? We’re living in a White Spiritual Boy world now, where numbers are meaningless and facts are the festive frosting on top of conspiracy theories. Perhaps we should just smile and nod and go with it.

So here’s to Danny and the hugest, most respected, most exciting, highest-ranked 75th best team in the world ...