As another Freedom Day passes, where are the genuine SA ...

As another Freedom Day passes, where are the genuine SA statesmen?

Freedom Day marks the 1994 elections and dream of a golden age, but corruption, misgovernance put paid to that 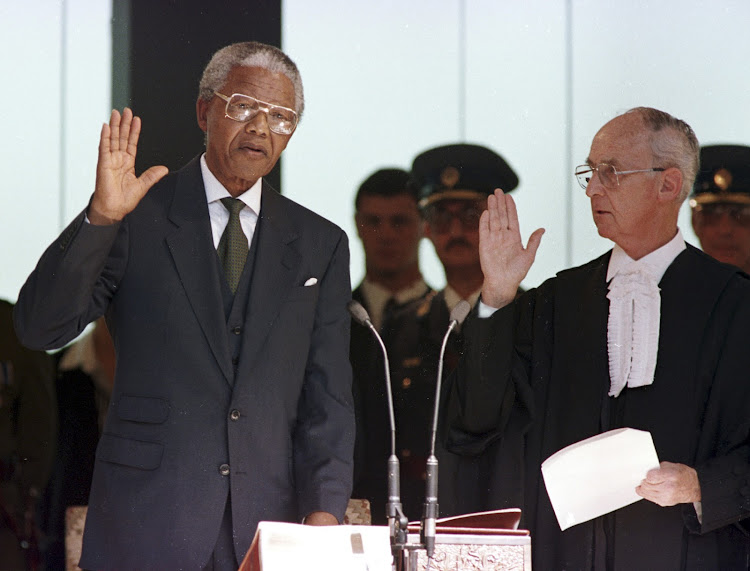 COUNTRY FIRST Nelson Mandela is sworn in as president of SA at the Union Buildings in Pretoria on May 10 1994.
Image: REUTERS/Peter Andrews

Historian CV Wedgwood wrote: “History is written backward but lived forward. Those who know the end of the story can never know what it was like at the time.”

Very few, even if not present in the infamous Gupta compound in Saxonwold, won’t know the result of the extraordinary testimony at the Zondo commission, offered up on April 26 by Norma Mngoma, estranged wife of political hack and one-time finance minister Malusi Gigaba.

Her lurid account of her ex-husband, literally bought, bribed, sold and delivered by the brothers Gupta, will serve as a sort of sordid, bling talisman of ANC corruption under Jacob Zuma and his gang of thieves. They robbed the country of its patrimony, plundered its economy and ripped the heart out of the tattered and fading dream of its promise of a free and democratic country.

That dream, which became a national nightmare in the years of looting to follow, began on April 27 1994, now memorialised as Freedom Day which a beleaguered nation, battered by near three decades of misgovernance and ravaged by the killer plague among us, celebrated on Wednesday.

And the headlines and the faded photographs of the day — a beaming Nelson Mandela casting his first ballot at the age of 75, snaking queues of voters stretching as far as the eye could see, determined to make their mark for a country which had deprived the majority of their essential birthrigh — were evocative of a golden new age which dawned that day.

Yet behind the scenes and away from the world and its media which descended on the world’s most hopeful morality tale that day, was another story, or several of them which pointed out how fragile the final achievement of April 27 1994 actually was, and how only the consummate statesmanship of the time saved the day and made the country safe for democracy.

It is worth briefly recounting two of them.

Mandela, in other ways the most partisan of politicians, was able at crucial moments in history to look beyond the interests of party and make tough calls on it, to meet the needs of the country in the making.

The first is derivative. The account appears in the biography of Stanley Greenberg, the American pollster and political strategist, engaged by the ANC to assist in its election campaign and retold in Dispatches from the War Room: In the Trenches with Five Extraordinary Leaders.

Greenberg was present at ANC headquarters in Johannesburg before the final election results in 1994 were announced. During the long tallying process, which dragged on for the best part of a week after the polls closed, the very future of the country was in the balance due to electoral infringements in key places.

At the ANC conflab, its operatives in KwaZulu-Natal were convinced the party had been robbed by the IFP of a legitimate outright victory in the province. Many ANC leaders regarded the result as “grand theft” and demanded the party take action and denounce the result, or at least call a press conference.

As Greenberg tells of the meeting: “Mandela said nothing during the discussion. Then he brought the room to a full stop. ‘Tell the comrades to cancel the press conference. We will not do anything to make the elections illegitimate. The ANC will not say the election is not free and fair. Prepare our people in Natal and the Western Cape to lose’.”

Thus Mandela, in other ways the most partisan of politicians, was able at crucial moments in history to look beyond the interests of party and make tough calls on it, to meet the needs of the country in the making.

And at critical moments which studded his presidency that followed, Mandela did the same. Whether accepting the outcome of the TRC report, arguing for the need for government to accept court judgments which found against his government, or preaching the gospel of reconciliation in favour of his former oppressors, he achieved a state of international grace not equalled in the modern world.

If Mandela is correctly acclaimed as the key hero of Freedom Day, there is another figure from those times, still among us today, who deserves recognition – even if I happened to be the recipient of a tongue lashing from him at another critical moment in that fraught election process.

Johann Kriegler was an eminent judge who afterward served on the Constitutional Court and today, at the age of 88, chairs the impressive NGO, Freedom Under Law, and regularly is outspoken in defence of the constitution and its finest instruments, including an independent and honest judiciary.

In April 1994, Kriegler had the enormous task of presiding over the entire election process as chair of the Independent Electoral Commission (IEC). Back then I was leader of my party (Democratic Party) in the PWV Province (today Gauteng). He and I had very different interests to protect and defend at the time.

Away from the acclaim of the world, witnessing the birth of our democracy was the actual counting process that would determine outcomes. The very process which the ANC comrades in Natal had found so disagreeable.

I had exactly the same experience in Johannesburg at the Nasrec complex which was the counting station for the whole of Johannesburg and Soweto. Instead of an orderly transport of sealed ballot boxes by the IEC as promised, the huge and sprawling election process overwhelmed the organisation. And so, often ballot boxes, some with broken seals, were delivered not by IEC officials but by taxi drivers or even ANC personnel. It hardly looked free and fair at Nasrec. The nub of the problem went further than runaway ballot boxes.

The law provided for a legally mandated reconciliation process between the ballots issued at a station and the votes in each box. But many overwhelmed election officials simply bypassed this provision. This meant that at many voting stations, there was no way of knowing how many ballots had been genuinely cast, or how many had been filled in after the polls closed. And in the absence of a voters’ roll, fraud at the polls was a real possibility.

And so late at night during the endless counting process, Roelf Meyer, on behalf of the National Party, and the DP separately went to see Kriegler to flag our deep reservations about the counting process and the lack of verified ballots.

Here were a group of politicians telling the eminent judge the law, which he knew well — that the entire election process could be undone by a court order upholding the verification process.

My brother Peter, a practising lawyer and DP provincial candidate, put the case to an increasingly exasperated and tired Kriegler. He turned on us and said words to the effect of: “You can approach any court you wish. But be it on your own heads. In law there might be a requirement for ballot reconciliation. But we are involved in a process much larger than that. We are involved in a process of national reconciliation.”

The judge’s words stopped us in our tracks. Just as Mandela’s words stayed the fury of his KZN comrades.

We might well ask, whether in the political or the judicial realm, where are our leaders today? And could any be capable of such acts of statesmanship? There are no easy answers to this, but Freedom Day is about a dream of a better country. Here’s hoping.