Now the fog has lifted, we see what a waste Covid ‘hygiene ...

Now the fog has lifted, we see what a waste Covid ‘hygiene theatre’ was

Millions of rand have gone into disinfecting surfaces, but the practice has no scientific backing 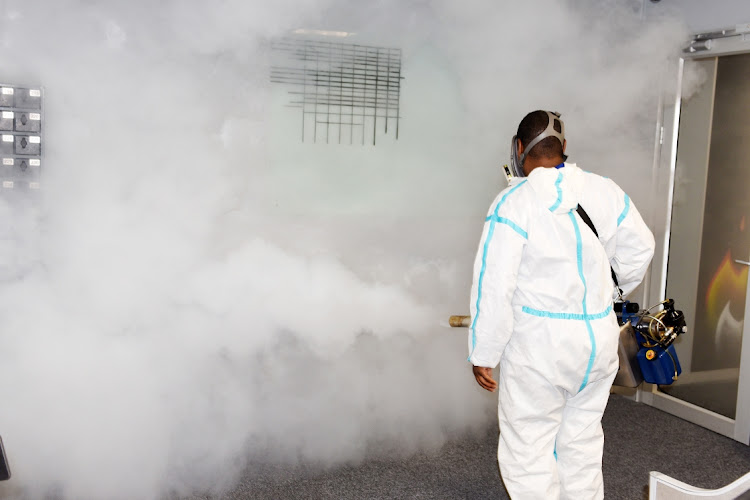 All the time and money we’ve been spending on routinely sanitising surfaces to avoid contracting the coronavirus has been a waste – you get the coronavirus by breathing, not touching.

That was the shock news from the US Centers of Disease Control (CDC) earlier this month. The body confirmed what scientists have been saying for months: the risk of catching the coronavirus from surfaces is extremely low.

“Doing a lot of spraying and misting of chemicals isn’t helpful,” is the CDC’s new message.

“This is a disease you get by breathing, not by touching.

One company which has fewer than 10 employees got a R37m tender, when their actual cost was less than R1m.

That’s a radical about-turn on what CDC scientists were saying this time last year. Two published studies revealed the heavy droplets of the coronavirus on a surface could remain viable long enough to make that the most likely way to become infected.

We were told the virus lasted up to two days on wood, four days on paper, three to seven days on stainless steel – you get the picture.

And with that, “hygiene theatre” became a global phenomenon. People in hazmat suits entered offices and schools to fog and spray every square inch of the place, because that was how we’d supposedly stay safe.

Only it wasn’t. As the months went by, the scientific community began to say people almost always got the virus from micro-droplets breathed out by an infected person they came into close contact with; hardly ever by touching a surface and then their mouths or noses.

In July 2020, 239 scientists addressed a letter to the World Health Organisation stating “beyond any reasonable doubt” that the virus spread indoors through tiny aerosols.

In the same month Dr Emanuel Goldman’s article Exaggerated risk of transmission of Covid-19 from fomites (surfaces) was published in The Lancet.

It’s been available for peer review for the past nine months, but its findings have yet to be challenged.

The claims about how long the coronavirus can survive on surfaces were based on lab studies. “Massive doses of the virus were deposited on the various surfaces in highly controlled lab conditions,” says Pretoria-based microbiologist Dr Lucia Anelich.

“What happens in real life is very different.”

She and her international colleagues on the International Commission on the Microbiological Specifications for Foods (ICMSF) produced a position paper last September stating that food did not present a Covid risk.

At the time China had banned food imports due to a perceived Covid risk.

In a widely shared YouTube video, Goldman put the risk of getting the virus from surfaces like this: “About 100 infected people would have to cough on the same area to replicate those findings.

“This should be the end of the misplaced focus on deep cleaning,” Joseph Allen, a building safety expert at the Harvard TH Chan School of Public Health, told the New York Times earlier this month.

“It has led to closed playgrounds, taking nets off basketball courts, quarantining books in the library, missed school days for deep cleaning and not being able to share a pencil.

“It’s a direct result of not properly classifying surface transmission as low risk.”

But that hasn’t stopped the local “hygiene theatre” brigade from exploiting people’s fears, the most extreme example being the more than R400m the Gauteng education department spent on the “decontamination” of schools in that province in just three months.

Most of it was totally unnecessary, and it was most certainly a colossal ripoff.

“One company which has fewer than 10 employees got a R37m tender, when their actual cost was less than R1m,” Arthur Bath of the Professional Body for Environmental Hygiene told TimesLIVE.

“What a sham! And there is no benefit to routine deep cleaning in schools and offices,” he said.

“Last June the national department of health said so in an advisory.”

“Fogging and deep cleaning gives people a false sense of security,” Bath said. “The same company that spends a fortune on fogging or electrostatic spraying will be lax about mask wearing in the office.”

Bath said government officials couldn’t claim to have authorised that “eye-watering spend” on school sanitising because little was known about the virus at the time and that they were responding to public pressure from pupils and teachers who wanted to feel safe.

If only they had put in soap, running water and basins – that would have had far more of a long-term impact on hygiene in this country.

“That is not true,” he said. “They just did not bother to do the research they were handsomely paid to do. The correct information was available to them.”

The New York Times article of April 8 is headlined: “Has the era of overzealous cleaning finally come to an end?”

In SA, that will depend on whether our health department chooses to spread the word on the fact that the risk of getting Covid from surfaces has been totally exaggerated – and how well they do it.

There remains a place for professional sanitisation.

The new CDC guidelines suggest that if someone who has Covid-19 has been in a particular space within the last day, the area should be both cleaned and disinfected.

“But in most cases, fogging, fumigation and wide-area or electrostatic spraying is not recommended as a primary method of disinfection and has several safety risks to consider,” the CDC says.

Importantly, the new cleaning guidelines do not apply to healthcare facilities, which require more intensive cleaning and disinfection.

The tragedy is all that money spent on professional disinfection would have been better spent on other means of preventing the spread of the virus – basins and soap in the schools, for example, says Annette Deventer, marketing director at Infection Protection Products, makers of Sani-touch products.

The company has been in the industry for many years – primarily supplying medical facilities and supermarkets, and recently the brand passed the necessary European Standard tests proving its products’ efficacy against the Covid-19 virus.

“I am really sad about the amount of money wasted in schools,” she said.

“If only they had put in soap, running water and basins – that would have had far more of a long-term impact on hygiene in this country.”

That’s just what the CDC is now saying. “Cleaning premises with simple soap and water – in addition to handwashing and mask-wearing – is enough to keep the odds of surface transmission low.

“In most everyday scenarios and environments, people do not need to use chemical disinfectants.”

Ventilation is a way to go in reducing the risk of contracting the virus, Bath says.

But that doesn’t have any theatre about it, so people may not trust that it will do the trick.

“When parents hear that there’s been a Covid-positive case in the school, they ask me about fogging,” said a Roodepoort High School principal during a discussion on the topic on Talk702 last week.

“Emotions play a massive role in whether parents feel its safe for their kids to go back to school.”

Well, usually these things take time. I suspect we’ll be living with hygiene theatre for a while yet.