Magufuli: bold and efficient, with a dangerous penchant for ...

Magufuli: bold and efficient, with a dangerous penchant for populism

President Cyril Ramaphosa left on Monday to attend the Tanzanian president’s funeral. What will the late leader’s legacy be? 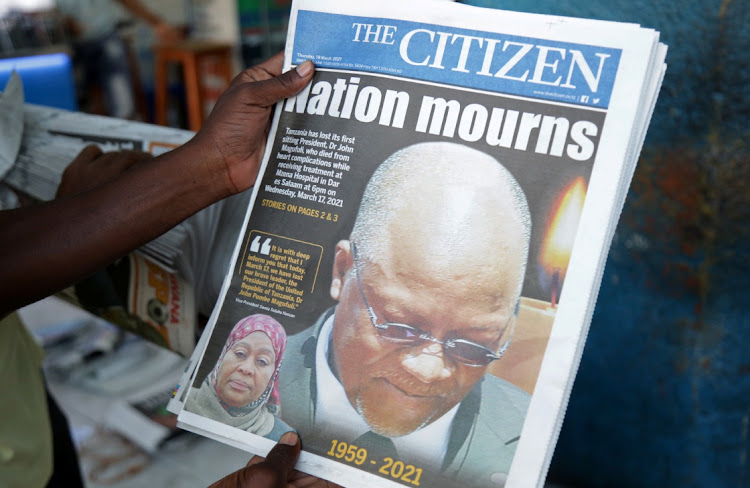 Tanzanian President John Pombe Magufuli has died at 61 years old – and in the first year of his second term.

Rumours had swirled for weeks about his ill health. But only a few days ago he was reportedly “hard at work”, according to Tanzanian Prime Minister Kassim Majaliwa.

It was in this alternative-truth universe, which Magufuli himself encouraged, that citizens were arrested for speaking about the president’s health earlier in the week.

He leaves behind a mixed legacy in his short stint as Tanzanian president. Allegedly a compromise candidate for his Chama Chama Mapinduzi party when he ran in 2015, Magufuli represented a safe pair of hands who was nonetheless expected to continue the dominance of his party in Tanzanian politics. But he was also reputed to be a no-nonsense leader who had shown a hard-nosed streak as a cabinet minister.

When he became president he sent out a stark message that he intended to banish a lot of the chronic problems in Tanzanian administrative and political leadership. He took over a government plagued by systemic corruption. It was characterised by ghost workers on the payroll, underperformance and laxity in public service, civil service absenteeism and extravagant spending.

Perhaps the most troubling development during Magufuli’s term was the misinformation he encouraged around the new coronavirus pandemic.

He showed a lot of promise in his early days. But his authoritarian side soon began to show. Riding a populist wave, Magufuli increasingly lurched towards authoritarianism. He abhorred criticism and actively supported the weakening of freedom of speech, expression and information.

Crucially, he set out to renegotiate and force substantive compromises with multinational corporations to give Tanzania a better deal on mineral exploration within its borders.

He also cancelled project contracts with the Chinese, terming some “exploitative and awkward”. This was a sharp break from the previous administration’s softer approach to foreign investors.

Magufuli’s hard stance won him a staunch following domestically and in the region, setting off a great deal of praise and inspiring the Twitter hashtag #WhatWouldMagufuliDo?.

His legacy will also be judged by significant achievements in infrastructure. In January 2021, the Tanzania government awarded the Chinese a contract for the construction of a 341km standard-gauge railway from Mwanza on Lake Victoria to the southern town of Isaka.

Previously, Magufuli had overseen the construction of a mass public bus transport system in the country’s commercial capital of Dar es Salaam. And under his watch, rural electrification projects boosted Tanzania’s economy and everyday lives.

While Magufuli won a lot of praise for his bold, efficient and sometimes abrasive approach to the management of state affairs, he also exhibited a ruthless authoritarian streak and a penchant for conservative populism.

In a highly contentious and widely denounced move, his government doubled down on a longstanding Tanzanian policy that bars pregnant schoolgirls from going to school even after giving birth. More than 55,000 Tanzanian schoolgirls have been expelled from school over the last decade for being pregnant. This is a policy that has denied young girls an education and prospects for a better future.

And in 2018, an amendment to the law ensured that government official statistics would not be challenged or questioned. Any effort to do so became criminal. In essence the state was made the sole custodian of data and its “truth” became the incontrovertible truth.

Under his presidency the country experienced a drastic deterioration in political pluralism and accommodation of different viewpoints.

Opposition leaders and critics were routinely harassed, some even imprisoned. It was on his watch that an assassination attempt was made on former presidential candidate Tundu Lissu, who remains a staunch critic of the late president.

Perhaps the most troubling development during Magufuli’s term was the misinformation he encouraged around the new coronavirus pandemic. Doubt and distrust have been a feature of the pandemic around the world. But in Tanzania, a developing and information-poor country, Magufuli’s Covid-19 scepticism led the country down an especially precarious path.

He encouraged doubt about the seriousness of the pandemic despite compelling evidence to the contrary. As casualty figures continued to rise and political leaders lost their lives to the virus, Magufuli’s government persisted in their scepticism.

He promoted dubious treatments for the virus, mocked mask efficacy, kept no relevant data and assured his countrymen that God would take care of them if the new coronavirus “ever became a problem”.

In the end, his approach to the pandemic created a health crisis. But this has been difficult to track due to a government clampdown on the release of data.

Death is always tragic. Countries feel especially bereft when they lose political leaders in whom so much responsibility has been vested. John Pombe Magufuli leaves Tanzania in a shroud of uncertainty, particularly its burgeoning health crisis.

His deputy, Samia Suhulu Hassan, now takes over as president for the remainder of his term, becoming Tanzania’s first woman president.

The stability of the nation hinges on two things: how fast Tanzania can pivot from Magufuli’s approach to the pandemic to dealing realistically with the most demanding health crisis of the day. And whether Hassan can restore faith in the country’s democratic institutions.