Look deeper and you’ll see both sides in Senekal have the same ... 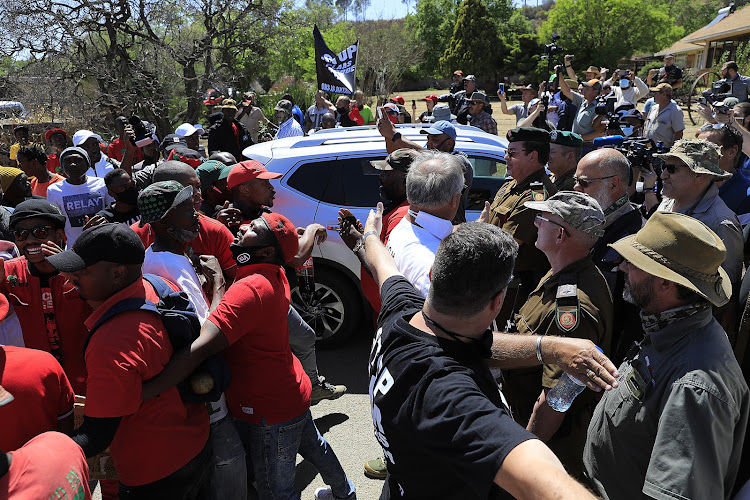 Much nonsense has been written about Senekal. Senekal represents a life-and death struggle between landowners and the landless. There is an ethnic genocide against whites. Farmworkers are treated as slaves. Farmers are the targets of racist blacks. Not so, more blacks are murdered than whites. From the venerable New York Times to the president of South Africa, everybody weighed in on a crisis in this small Free State dorpie better known to outsiders for the little Wimpy restaurant on the short main road passing through the town.

What makes the resolution of Senekal so frustratingly difficult are the simplistic blacks-versus-whites explanation for very complex human confrontations in the breadbasket of the country.

What is the meaning of Senekal? To understand the dangerous dance between white and black citizens in rural South Africa, read a mesmerising new book on another Free State town called Parys. Whereas in Senekal, two black men are in the courts for the horrific killing of a young white farm manager, in Parys a group of white men are awaiting final sentencing for the grievous assault of two black men who allegedly attacked an older white man on his farm.

One important observation emerges from the compelling story of the Parys murders in Andrew Harding’s book, These are not gentle people: these stories point to much more complex entanglements between whites and blacks outside of the big cities. To begin with, the deep social and economic transformations of rural South Africa have not happened. Old relations of racial hierarchy remain solidly in place – farmers are mainly white while farm labourers are black. Settlements around the farmlands are as racially enclaved in the 2000s as they were in the 1990s; there is a Tumahole for every Parys, as there is a Matwabeng for every Senekal. As a result, when a crisis hits in these parts of rural South Africa, the split is predictably racial in the minds of the locals and in the pronouncements of the big city elites.

That is the superficial reading of what happens in places like Senekal. There is, however, something much deeper at play. Here are two groups of South Africans who feel they are unseen victims of forces beyond their control. White farmers believe the government has not recognised their plight as they sit stranded in vast, open areas vulnerable to attacks. They hear and read in the Afrikaans press about a white woman cut into pieces and pressed into a refrigerator, or of an elderly couple mercilessly tortured to death on their farm.

If you don’t read Die Beeld or Volksblad, you are blissfully unaware of the anxiety-inducing headlines day after day about white people massacred on their farms and smallholdings. As a result, these white South Africans sit on their own farms angry, scared and traumatised. When the call therefore comes of another attack in the area, they rise in anger. The government has failed them, so they make their own private security arrangements, but still the death toll mounts.

Black township dwellers also feel the government has failed them and nowhere is this more evident than in the rural Free State, where whole departments of state are regularly placed under administration and where there are the most prominent corruption scandals. Scandals such as the asbestos audit, where only 3% of R230m was used to do the work of ensuring the health of home dwellers, or the R250m Vrede Dairy Project that was supposed to empower black farmers but enriched a small elite of crooks in and around the department of agriculture.

On a regular basis the black citizens of the province take to the streets, burn down municipal buildings, march in protest, but they still remain poor, fleeced by their own people, the black elites who drive past them in shiny black cars a cruel reminder of their left-behind status.

What is often missed in the hasty conclusions of a racial divide in the rural Free State is a shared contempt of both white and black citizens by their government. In a recent television report, a Senekal farmer said even black farmers in these rural areas had given up on calling the police as their sheep routinely disappeared because of persistent stock theft. The police, the locals swear, are part of the corruption. In fact, most of them believe the reason the white farm manager was brutally murdered was because he made the mistake of confronting two black thieves caught in the act.

What happens in this complex dance of mutual victimhood, where the government is invisible in the lives of these rural citizens? Blacks and whites turn to each other and then they turn on each other. The black labourers in Tumahole or Matwabeng have no choice but to seek work from the white farmers; it’s either that or go hungry or leave home to scour for work in the big cities.

In seeking work, and holding on to it, the black farmworker has no choice but to absorb abuse, sometimes physical beatings, well out of sight. Using the hated language of baas or kleinbaas keeps the labourer in a job. But then there is a false accusation (stolen sausages, in the Parys case), or a promised payment not made, and the farmworker’s resentment grows to boiling point. Often a farm attack has its roots in a local grievance, the tipping point.

The white farmers on the other hand need black workers on the vast farmlands, for both economic and ideological reasons. It is still relatively cheap and dismissible labour when times are tough, and though no one will say it, such control over blacks also satisfies an ideological need, keeping the past in place.

What does not enter the transient media narratives is that farmers are struggling. There have been successive years of droughts; loans from the bank are due; equipment is more costly; and there is constant government pressure about minimum wages and land redistribution. The financial pressure coexists with constant political pressure and, in the middle of this distress, another farm attack. Something explodes and farmers converge on fleeing black suspects dancing (literally) on their heads, as in the Parys attacks.

Then something very South African happens. The courthouse in Senekal becomes a grand opportunity for minor elements to gain instant political advantage. The Economic Freedom Fighters converge on the courthouse in trademark red uniform presumably to protect the government buildings. A smattering of Afrikaans rightwing organisations also appears for the show as the counterforce to the black turnout, some dressed in old defence force khakis. A smaller group of ANC activists, anxious about being left out, make their showing in familiar yellow outfits. A colourful spectacle of mostly outsiders. There are weapons such as golf clubs and knobkerries, and a few bricks fly in the direction of bikers who complete the carnival.

The blacks revellers sing a long-discarded liberation era song, Kill the boer, kill the farmer; the whites respond with the white national anthem from the apartheid days, Uit die blou van onse hemel. For this noisy minority, their only available language is that of a present but receding past. And yet they can do great damage to the project of social cohesion. How does this ugly dance end?

What does not work is to tell farmers that more black people are murdered than whites. Of course, that is true when more than 90% of your citizens are not white in a country with a history of violence. That kind of counting logic is insensitive, even offensive, when your family and friends are among the ones being picked out for murder on their farms. The president’s response might give solace to his party, but it is for farmers yet another example of being dismissed, not heard and not being recognised.

What also does not help is to tell black protesters to play by the rules and not take the law into their own hands. For desperately poor people who see the black elites enjoy lives of ostentatious privilege while fleecing the resources of the state, the rules do not apply and so almost any form of protest is accompanied by violence and vandalism.

To solve the problem of Senekal (or Parys) the answer is not to tell black and white South Africans in the rural areas to be nice to each other. Why should they be when the government screws them both?

How out of tune is the SABC for wanting us to pay it to watch Netflix?