The politicos were in Senekal for one reason: to leech off ...

The politicos were in Senekal for one reason: to leech off people’s pain

For AfriForum and the EFF it was not a day of protest, or of seeking solutions, but a public relations exercise 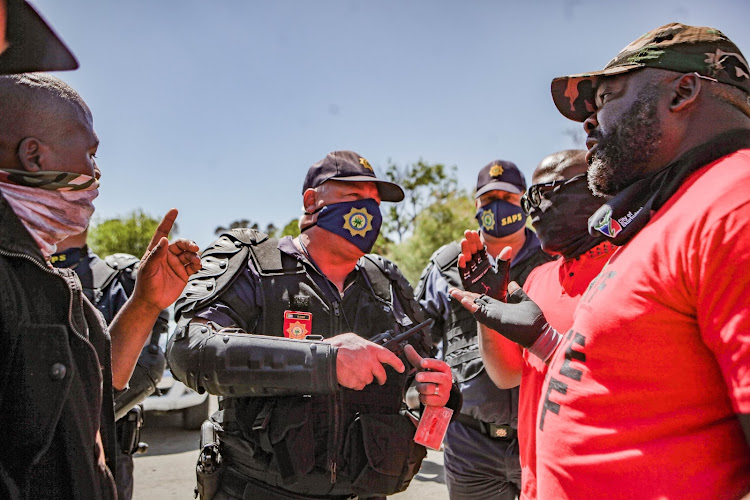 APOLOGY:  In the piece below, Justice Malala wrongly attributed the phrase "farm genocide" to Afriforum as it is not a correct depiction of its views. Afriforum successfully challenged this statement with the Press Ombudsman, arguing its position is that farm murders do not constitute genocide. We apologise for this and the sentence in question has been removed. - ed

Politicians were the winners in Senekal last week. South Africans, in the meantime, lost out to the noise of those who thrive in chaos and wish to divide the country.

The usual political suspects were all there. They could not help it. Like flies to a dog’s excrement, they descended on Senekal to play to the gallery. They offered no solutions, no wise words, no future. Instead, they added oil to the flame. They had populist words for their supporters, many of whom arrived outside court already drunk from their leaders’ empty rhetoric.

Senekal last week had nothing to do with solutions. It was all about politicians’ testosterone. It was all about politicians’ egos. What useful idea came out of all that heat and noise generated by all those politicians in Senekal last week? There is nothing. Nothing that makes SA a better place. Nothing that leads us to a better understanding of race relations in SA after 1994. Nothing that is a solution to farm murders – many of whose victims are poorly paid, desperate black people – or a solution to the incredibly horrendous murder and crime problem in this country.

At their sumptuous pads in Cape Town and Johannesburg, the politicians who arrived in Senekal last week to stoke hate and pose for the cameras are sipping whiskies and laughing about how they “showed them”. This was not a day of protest, or of seeking solutions. All those politicians who pitched up in Senekal did it for one reason and one reason only – it was a photo shoot, a public relations exercise.

This was not a day of protest, or of seeking solutions. All those politicians who pitched up in Senekal did it for one reason and one reason only – it was a photo shoot, a public relations exercise.

In Sesotho there is an expression for people like these: they are bo mponeng (the “see me people”). They are the type who arrive at funerals and cry and moan far more loudly than the bereaved. They are there, like some of the characters in Zakes Mda’s Ways of Dying, to be a spectacle – then have a fulsome meal and go off to gossip about the poor food or that the coffin was cheap pine.

Think about the organisations in Senekal last week. These organisations are leeches, feeding off the pain of ordinary South Africans who are bleeding from crime. AfriForum is an organisation whose sole purpose is to leech off white Afrikaner pain, legitimate or not.

Disagree with me? At the end of the news agency Reuters’ story on the events in Senekal there was this paragraph: “Murders of white farmers make up a small fraction of the total in South Africa, which has the world’s fifth-highest murder rate. In the 2019/20 financial year there were 21,325 murders across the country, of which 49 were white farmers, according to police statistics.”

AfriForum does not care for these 21,276 “other” lives. Just white Afrikaner lives. AfriForum is not looking for a solution for SA. It is looking for a whites-only solution.

We know what he wants. The EFF and ANC elites must benefit from farm expropriations and distribution, just as they did in his hero Robert Mugabe’s Zimbabwe. There was not a single solution proffered by Malema to issues roiling Senekal last week except to chant that Boers must be shot.

The less said about Helen Zille’s appearance the better. She wore her “I am an African” T-shirt, got her usual detractors hot under the collar on Twitter, and left knowing that she had achieved her goal for the day: to trend on Twitter.

All these politicians were allegedly there because a young man, 21-year-old farm manager Brendan Horner, was attacked, stabbed and tied to a gate at what is supposed to be a safe place – his home. None of the actions of a single one of the politicians in Senekal last week has brought any serious South African closer to solving the crisis of murder – urban, farm, township, black, white – in SA. Today, more South Africans will be brutally murdered. Zille, Malema or AfriForum’s Kallie Kriel will not give a toss about them unless there are cameras rolling.

Straight to the cop: Zondo zeroes in on Bheki Cele