Rescuing SA’s economy will take a helluva lot more than yet ...

If Cyril wants to rebuild the economy he needs to reinvent the ANC, because it doesn’t know how to grow anything 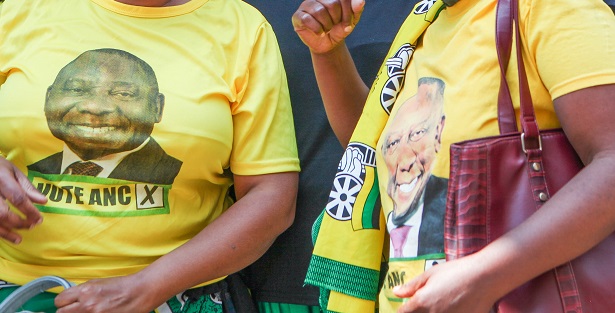 RISK VS REWARD The exchange rate of the ANC economy varies, with 10 votes sometimes costing as little as a T-shirt.
Image: Sharon Seretlo/Gallo Images

To be clear, I’m glad TBPNSTOWADW exists. If we’re going to be My Fellow South Africaned by the president, I would far rather it was about The Big Plan than, say, about how the collective has decided that Ramaphosa isn’t showing enough commitment to Radical Economic Implosion and that he is about to be recalled and replaced by a People’s Triumvirate comprising ANC secretary-general Ace Magashule, a bottle of whiskey and an Ouija board.

Still, by this point I must confess I am suffering from Plan Fatigue.

It’s not that I doubt the president’s bona fides. I’m sure he urgently wants to stop the bleeding and I’m certain that his plan was put together by the best minds he could muster. I am even willing to believe the president’s new plan could, in theory, work.

But this isn’t about theory any more. This is about what the ANC government actually does, every day, in every municipality in the land. And for the past 10 years, what it’s done, every day, is show it can’t fix a crumbling economy because it can’t run a functioning one.

All it can do and, therefore, all it has done with almost religious zeal is attach itself parasitically to any healthy flow of money or industry or talent or development and feed. When the flow slows and dies, it moves somewhere else.

This is not to say the ANC doesn’t know what an economy is. On the contrary, the ANC is itself an economy and quite a sophisticated one, with its own rules, hierarchies, incentives and solid theories governing risk vs reward, mostly involving the importance of never leaving a paper trail. It even has its own currency, though the exchange rate varies from day to day, with 10 votes sometimes costing as little as a T-shirt or as much as a braai pack.

This is not to say that the ANC doesn’t know what an economy is. On the contrary, the ANC is itself an economy ...

This economy, however, builds nothing but patronage networks and maintains nothing but the privilege of the select few. It constructs no power stations or factories, signs no trade deals, farms no land. It is entirely parasitic, relying for its existence on the real economy of SA, which continues to struggle on despite the best efforts of the ANC.

Which is why I believe that Ramaphosa’s plan, no matter how impressive it might be on paper, is doomed. It is doomed because the people who will have to implement it, the jaded predators of the ANC, have shown us that, at a very fundamental level, they don’t know how to grow a thing; how to invest and build rather than simply find increasingly cynical and efficient ways of consuming more and more pieces of an ever-shrinking pie.

If SA were a province of China or a state in the US, I would be much more optimistic. Given the ANC’s supreme talent for funnelling cash away from existing economies, our little province-country would soon be flooded with money extracted from Beijing or Washington.

But make it themselves from scratch? That kind of miracle would require a very different sort of plan: the total reinvention of the ANC, rebuilt from first principles and purged of its current deep-rooted culture of extraction.

And that, I fear, will take infinitely more than an earnest “My fellow South Africans” and yet another glorified spreadsheet.