Don’t be smug, Thabo. You are partly to blame for the mess we’re ...

Don’t be smug, Thabo. You are partly to blame for the mess we’re in

Mbeki could have paved the way for a tolerable future, but he pitted the ANC against itself in pursuit of control 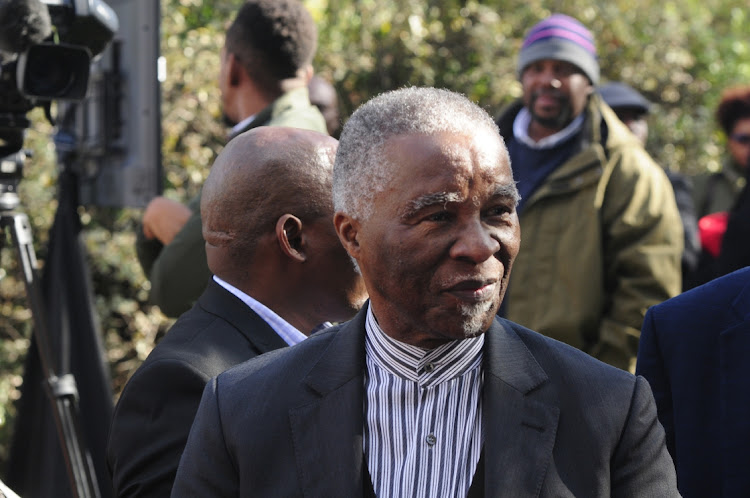 Off you go Former president Thabo Mbeki was ousted for trying to impose his will on his party.
Image: Thulani Mbele

Footage from 2018 is doing the rounds on YouTube. In it, former president Thabo Mbeki makes fun of President Cyril Ramaphosa. His teasing takes the form of a story about the time when the exiled ANC was establishing a presence in Dar es Salaam.

The Tanzanian authorities informed Frelimo (the Mozambican Liberation Front), which was also based in Dar, that a group of Portuguese assassins was in town to target Frelimo leaders. “Where are they?” Frelimo asked. The Tanzanian authorities showed them where the assassins were hiding. “Thanks,” the Frelimo people replied. “We will deal with them.”

It is an inimitable Mbeki story — subtle, biting and entirely at another’s expense. But he seems blithely unaware of his own implication in the tale. For it is unlikely that Ramaphosa would be governing this cautiously had he not watched Mbeki’s fall. Mbeki, as we all know, tried to impose his will upon his party and was defenestrated for his troubles, leaving an unholy mess. His abiding legacy may well have been to drive the ANC into a permanent war with itself.

Of course, counterfactuals are unfair. It is cheap to say that had Mbeki done this or that, SA would be a different country now. We cannot know for sure. But there is nonetheless value in exploring paths he did not take.

He did not want agencies that were jealously independent. He wanted control.

Long ago, shortly into Mbeki’s first tenure as president, I interviewed a senior European police officer at the tail end of his visit to SA. Having witnessed the scale of the country’s policing problems, he told me he found them overwhelming. If we tried tackling them all, we would simply fail. Choose one, he said. Choose the greatest risk and leave everything else to private policing.

“And what is the greatest risk?” I asked. That state institutions degenerate into organised crime rackets, he replied immediately. Build formidable investigative and prosecuting agencies, dedicate them entirely to policing corruption and protect their independence jealously.

Even if Mbeki had accepted the first part of that advice, to dedicate policing entirely to fighting corruption, he would not in a thousand years have accepted the second part. He did not want agencies that were jealously independent. He wanted control. And so he appointed a lackey beholden to him as commissioner of police and as director of public prosecutions he chose an ANC cadre who was also his client. It was not long before both agencies were perceived as doing his bidding. The rest is history. Mbeki was thrown out and the police and National Prosecuting Authority (NPA) were torn apart.

What might have happened had Mbeki decided to make these institutions formidably strong and entirely independent of his will? No doubt, he would have suffered. They would have thwarted his attempts to fund the ANC through the arms deal. They may well have thrown some of his allies in prison. He would have been a far less powerful president.

But he would also have paved the path to a more tolerable future. Key institutions of state would have had the moral authority to ward off those who would do them ill. Mbeki’s foes were given licence to wreak destruction on the police and NPA because they were seen to belong to him.

Mbeki seems blind to his mistakes. He mocks Ramaphosa for not governing. But Ramaphosa inherited a state ravaged by a war for which Mbeki is, in part, responsible.

‘Quiet diplomacy’, as spineless as ever, slithers ...

Viruses and Mbeki’s vivid delusions cause a ...

Singapore Covid death rate is world’s lowest. What is it doing right?