On the DA’s rocky road, it’s a step to the left, then a huge jump right

Lifetime loyalty in sport is understandable, but in the political horror show, a switch can be patriotic 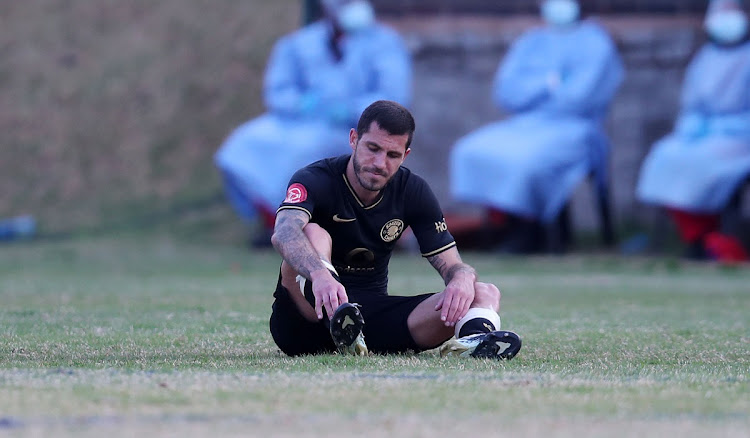 No luck in this draw A dejected Daniel Cardoso of Kaizer Chiefs during the Absa premiership match against Baroka FC on September 5 2020. The teams drew 1-1. Sports teams, like political parties, have a tendency to disappoint.
Image: Muzi Ntombela/Gallo Images/BackpagePix

So it came to pass, dear reader. As predicted, Kaizer Chiefs bottled the league title in the last minute, to much amusement. Witnessing the supporters’ meltdown on social media at the weekend, we laughed and laughed, until we could laugh no more.

The memes mocking them were felicitous. There was an especially brilliant one that juxtaposed an ANC logo with the Chiefs badge under this descriptor: “The heartbreak combo.” Political parties, like sports teams, have a tendency to disappoint. Lifetime loyalty to a football team I can understand though. Only pride gets wounded when they constantly lose games, mess up and fail to improve. But lifetime loyalty to a political party is an absurdity, unless you are profiting financially from that loyalty. If you are a voter, changing your choice of party if it no longer serves your interests or continually breaks promises is not just wise, it’s a patriotic and revolutionary act.

Here I’m not only referring to the ANC. Black supporters of the DA must have watched in horror over the week as the party took another leap to the right. More than a decade ago, the DA took the bold but risky step of making itself more attractive to a broader and more diverse electorate, rather than its traditional white suburban base. Under Helen Zille’s guidance, it groomed a range of talented black youngsters who were able to rise from obscurity into a new crop of MPs, MPLs, councillors and party executives, turning many of them into recognisable brands. That this move did not yield immediate electoral success is perhaps the reason it has now reversed this progress and opted to protect the bird in its hand.

It came out of its inaugural policy conference having adopted a principle of “nonracialism”, which it describes as a “rejection of race as a way to categorise and treat people, particularly in legislation”.

The assumption that one’s race represents people who think, feel or have the same experience of shared events based on their physical appearance is wrong.

“The assumption that one’s race represents people who think, feel or have the same experience of shared events based on their physical appearance is wrong,” the DA contends.

OK, we hear you, but what about racism and racial discrimination? Do they not exist as well? According to the reformed DA, they do. While race does not exist in its book, “racialism and racism do exist and have a profound and damaging impact on the lives of individuals and society”.

But that’s a contradiction. How does racism exist outside race? Also, if race does not exist, but racism does, how do we redress the plight of those who were denied opportunities and excluded from sharing in the country’s wealth by centuries of systematic racism?

In its policy conference discussion document, under “Equality of Opportunity”, the party argues it can do this through “equality of opportunity”, which entails “providing everyone with a solid foundation to use their own talents and innate abilities to take themselves as far as they are wishing to go”.

If in power, it will unlock these inherent talents and abilities by promoting “equality of opportunity” by fixing education, health and other aspects of the broken system to ensure its victims attain equal opportunity.

However, it rejects special upliftment through race-based redress that gives preferential treatment to individuals disadvantaged by the past or the current broken system.

This bizarre rejection of race-based redress in a country with a history such as ours might appease the DA’s traditional voters and help it maintain control of the Western Cape, but surely the party has officially given up on ruling the country one day.

Those of its black members and voters who disagree are better off remaining loyal to their sports teams.

If only the ANC could spin its ball properly, ...

EDITORIAL | DA and EFF are their own worst ...

Finally, DA admits apartheid is to blame for ...

It feels good to back them, but the beloved ...