The story of Madiba and the Afrikaner twins reveals a truth ...

The meeting with Constand Viljoen averted war, and along with good science illustrates the root of prejudice 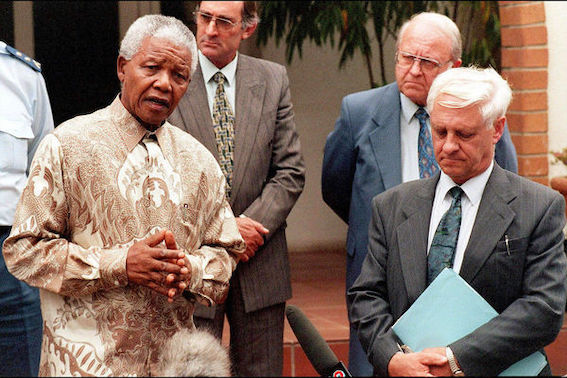 Meeting of the minds Four months of highly secret meetings between Nelson Mandela and Constand Viljoen culminated in he later disbanding his military force and taking part in the 1994 elections.
Image: Twitter/@NelsonMandela

What are the roots of prejudice and racism?

The short answer is: a lack of human contact.

It sounds very simplistic, but there is good science behind it. It is worth considering, for us here on the southern tip of Africa, but also for polarised communities like the US.

The young rock-star historian from the Netherlands, Rutger Bregman, is making waves with his latest book, Humankind, with the thesis that humans are inherently good, despite the evil many of them often perpetrate. When I became depressed about the vulgar racism on social media in SA in recent times, I read his recent essay in the Dutch online newspaper De Correspondent for some relief.

The idea that a lack of contact between people was the root cause of prejudice, hatred and racism was offered by the American psychologist Gordon Allport as far back as 1956. He visited apartheid SA that year and said that apartheid wasn’t the solution to the country’s problems, but the root cause. Black, white and brown should get to know each other better at school, at church and in the workplace in order to better understand each other and stop people generalising about the “other” because they don’t know them.

Bregman illustrates this problem by telling the story of the famous SA identical twins, Braam and Constand Viljoen.

They were formed by the same history, were socialised by the same family and environment and attended the same class at school. But when they turned 18, their mother said there was only money for one of them to study further. Braam went to university to study theology, and Constand joined the army.

While Constand was rising in the ranks of the military, Braam studied in Holland and America and befriended students and lecturers from all over the world. The two became so alienated that they didn’t speak to each other for years. Constand believed there was a Total Onslaught on the white republic from the communist ANC, while Braam’s eyes had been opened to the evils of the apartheid system.

The two men trusted each other. Mandela said to Constand in Afrikaans: ‘General, there can be no winners if we go to war.’ Constand, a veteran of many battles in Angola and Namibia, agreed.

In May 1993, Constand, who had just retired as head of the apartheid defence force, was asked at a mass rally of right-wingers in Potchefstroom to lead the resistance to a negotiated settlement with the ANC. He formed the Volksfront and mobilised about 150,000 white men in a military force that would stop a transfer of power in its tracks.

Two months later, Braam, who had developed a good relationship with some key ANC leaders, walked into Constand’s office and convinced him to have a secret meeting with Nelson Mandela. Constand was taken aback by Mandela’s appreciation of the history of the Afrikaners’ battle against British imperialism.

The two men trusted each other. Mandela said to Constand in Afrikaans: “General, there can be no winners if we go to war.” Constand, a veteran of many battles in Angola and Namibia, agreed.

Four months of highly secret meetings followed that culminated in Constand disbanding his military force and taking part in the elections of April 1994. SA had dodged a bullet. If it hadn’t been for Braam’s intervention and the agreement between Mandela and his twin brother, the transition to democracy would have been a very bloody affair, if it happened at all.

When Dr Allport visited SA in 1956, he was accompanied by a young student, Thomas Pettigrew, who later became a prominent civil rights activist. He spent the years after 1956 to prove Allport’s thesis about human contact, and when he visited SA again in 2006, this time as an esteemed professor of the University of California, he was impressed by how much the society had changed since 1994.

Bregman quotes sociologists who had found that the ethnic and racial isolation of white Americans were mainly responsible for the Trump phenomenon. They found that the further Americans lived from the Mexican border, the more they supported Trump’s wall – the problem wasn’t too much contact between Trump supporters and immigrants or Muslims, but too little contact.

It doesn’t mean we need to give up who we are, says Bregman. “Among the most notable findings to come out of contact science is that prejudice can be eliminated only if we retain our own identity. We need to realise that it’s okay that we’re all different – there’s nothing wrong with that. We can build strong houses for our identities, with sturdy foundations.

“Then we can throw open the doors.”

• Max du Preez is the publisher of vryeweekblad.com.

Cyril’s wasted chance: a New Dawn deferred is a ...

EDITORIAL | DA and EFF are their own worst opposition