The brazenly rotten are deployed everywhere, because the party rewards them 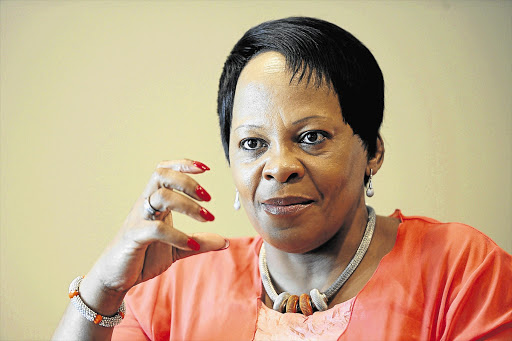 A firm grasp on things Nomvula Mokonyane does not seem to have any shame at all about the cash and favours that have come her way.
Image: Sunday Times

The stories of corruption that spill out into the public domain daily are deeply traumatising. After hearing what transpired at forums like the Zondo commission you, the listener, feel dirtied and soiled as if you need to go and have a shower to remove the slime of corruption.

What is even more shocking, however, is the sheer brazenness of those who took cash and favours. They look around, at the press and the populace and their comrades, and you can feel their dismay. Not at what they have done, but at the fact that others are shocked and ashamed at their behaviour.

Last week, Nomvula Mokonyane nonchalantly spoke of how groceries were delivered to her house; how security features were installed; how a R3m car was bought for her; how a birthday party – or several – were organised and paid for her. She did not seem to have any shame at all about the obvious question that springs to mind: why did you do it?

The same went for one of the most respected MPs from the ANC, Vincent Smith. Turns out Smith had received a “loan” of R600 000, which he did not declare, from Bosasa executive Angelo Agrizzi. He also had a car from late Bosasa CEO Gavin Watson. It was all above board, said Smith. Nothing to see here, folks. Except, perhaps, that he should have declared the loan.

Now, all these payments to these two politicians are just the latest in an avalanche of putrid garbage emanating from the ANC. The stories of bags of money allegedly being handed over to the likes of Malusi Gigaba and Brian Molefe at the Gupta compound, the conviction of Schabir Shaik for handing over monies to Jacob Zuma way back in the late 1990s and early 2000s, and the many other allegations we have heard and continue to hear point to one thing and one thing only: corruption is deeply rooted within all levels of the ruling party.

People like me can write what we like about Jacob Zuma, but the man absolutely does not care. That is because he does not see what it is exactly he has done wrong.

Mokonyane was premier of Gauteng when the deposit on the R3m car was made. As premier of the province she had access to several cars, her accommodation was paid for – she virtually did not have to carry any cash. Her salary was dedicated to her family. She did not need a new car. Yet she got one for free – for a tidy R3m at that.

People like me can write what we like about Jacob Zuma, but the man absolutely does not care. That is because he does not see what it is exactly he has done wrong. He took money to do his friends the Guptas some favours? Is it his fault if people thank him with cash?

He thinks he is a king, and the rest of the party believes it is royalty. We all bow before them, and we all bring gifts to them if we want to get ahead.

People like these are richly rewarded by the ANC. Zuma still attends the meetings of the national executive committee of the ANC and is known to hold forth without shame despite the numerous cases he loses every week in courts across the republic.

Gigaba, whose marital problems are so special that he seems to have the power to call on the elite crime-fighting unit the Hawks to arrest his wife and confiscate her phones while ordinary abused women have to deal with the misogynistic constable at the local cop shop, resigned as a minister earning an annual salary of around R2.4m in 2018 and as an MP a month later – and is now fully deployed at the ANC head office, Luthuli House. Mokonyane, like Gigaba, also luxuriates in secretary-general Ace Magashule’s office at Luthuli.

As if that is not enough alleged bribe takers in one place, Carl Niehaus, notorious for inventing the deaths of his relatives so he can tap comrades for cash, is also deployed in Magashule’s office.

Now, there are many good people in the ANC. They live within their means. They take no bribes. They work for the upliftment of the poor and to achieve many of the noble aims of their organisation. These people also keep quiet when Magashule packs his office with an A-Team of alleged crooks.

In every provincial office of the ANC, in every regional office and in every branch structure, there is a mini-Magashule office. Everyone in the organisation knows. And they tolerate it, or want to be part of it.

It’s a culture. It has taken over.

The ANC is in ruins, but opposition parties ...

In point of faction: the ANC is split down the ...

Finally, DA admits apartheid is to blame for economic injustice