Capitalists sink to new depths, and we’re letting them get away ...

Capitalists sink to new depths, and we’re letting them get away with it

The UN is poised to start deliberations about allowing deep-sea mining, with no regard for the youth 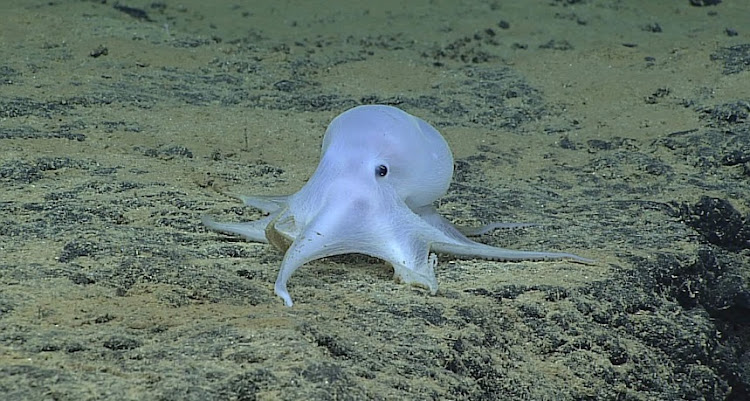 UNCERTAIN FUTURE This ghostlike octopus was only recently discovered deep at the bottom of the ocean off an island near Hawaii. It makes its home at a site being eyed for deep-sea mining.
Image: Courtesy of NOOA Office of Ocean Exploration and Research, Hohonu Moana 2016

Many of us face challenges borne not of our own doing, particularly now, amid a pandemic. One group especially disenfranchised is the youth, whose members are often forced to capitalise on adolescent rebellion to drive painfully obvious perspectives back into the common senses of society.

Recently, at a virtual UN Global Biodiversity engagement, I was witness to how participatory bodies, in charge of administering the UN Convention on the Law of the Sea (UNCLOS), are poised to begin deliberations about abstracting those rare Earth metals and minerals found at the bottom of the oceans. Unlike most of my predecessors, I, and a large contingent of young people, have become increasingly aware of the intrinsic value of all life and the life-giving systems of the planet, of which the oceans are by far the largest. When pressed, SA decision-makers at the conference stated these resources would be orientated towards the beneficiation of mankind. However, I feel several fundamental steps were bypassed with respect to youth acknowledgment and participation before arriving at this weighty decision to exploit the deep ocean.

Extraction of the Earth’s bounties has catapulted technological progress far further than what would have been possible in an orthodoxly restrained environment, limited by natural and social checks and balances.

You are, hopefully, aware, as the conscientious, connected youth of today are, of the nightmarish legacy of terrestrial mining. Extraction of the Earth’s bounties has catapulted technological progress far further than what would have been possible in an orthodoxly restrained environment, limited by natural and social checks and balances. But because of unconventional extraction, and subsequent refinement and consumption, a yawning chasm has been entrenched into the social fabric of mankind, whereby those with resources are magnitudes more advantaged than those without. Referring to natural resources, the impoverished of this world are seen as that. Disparate, desperate and disposable. In mining communities across the world, from Brazil to Africa, to the deep reaches of China, these realities are rampant and worsening as consumption avenues further streamline.

By ignoring the underlying cause of these issues — endless extraction, consumption and wealth inequality — we perpetuate a cycle of human inefficiency and powerlessness, undermining the UN’s Sustainable Development Goals in their entirety.

You may be surprised that one of the nascent notions of the youth is to want less for ourselves and more for each other. Young people have become intertwined through technology, the internet and social media. We recognise each other as distinct, empathetic beings who hold the commonality of our generational dispossession as our unifier and are moulded by a global consciousness. Maybe not all of us and maybe not at the same time, but we want a better future for humanity, especially our subsequent generations. When a teenager dies of starvation in the rural areas of Bangladesh we feel it; when the Amazon is on fire and young people lose their ancient identity, we feel it; when a community at the tip of Africa is dispossessed of its cultural homeland, we feel it, because we know what these actions portend — more anxiety, more disempowerment and more mania into the machine of consumerism. Now more than ever, the youth are being forced to lead and we want to lead people down a path far away from destruction.

To even contemplate descending to the depths of the life-giving ocean to stab, drill and mine away at those fragile, ancient geological formations should induce nausea. To recognise that such actions are to be sanctioned by the UN was disheartening. At those depths, mitigation and rehabilitation is impossible. Things develop and change at such an incrementally slow pace that any introduced change might as well be permanent.

The blasts are taking place on aboriginal land, with indigenous Australians hoping for a positive outcome
World
7 months ago

Venture capitalists leverage the economic impetus of such actions to invigorate collapsing nations with highly youthful populations, such as in our own country, SA, but this is a disingenuous argument. The global north and pockets of elite in the developing world, who will be the main beneficiaries of these schemes, have hoarded and grown gluttonous on the benefits our shared natural capital. Non-confrontation against such parasites may be endorsed by the UN, but tameness in not addressing wealth inequality massages the illogic of deep-sea mining as a utopian conduit into the foundation of desperate economies. I urge South African decisionmakers to reinterrogate the role that UNCLOS has chosen to play in advancing the destruction of the deep sea.

These minerals are not just laying around for greedy men and women to repurpose and gobble up, they serve an intrinsic purpose. The deep sea is a tough, unforgiving place for most living things. Intense pressure, no sunlight and freezing temperatures are some of the characteristics of this alien environment. Life, however, has found a way to thrive.

By disturbing these areas we risk losing entire unstudied ecosystems. The much sought-after nodules on the sea floor, for example, which have great agricultural attraction, are part of an irreplaceable life system which we humans have no right to disturb. The deep-sea octopus (the deepest ever discovered), which lacks colour pigments, uses these nodules as a birthing anchor. The mother octopus lays her eggs on a nodule and thereafter wraps her entire body around them to protect them for several years, slowly dying and expending her life force until the eggs hatch to continue the cycle anew.

If such naturally occurring altruism cannot sway the hand of mining capitalists, then we have little hope for what the UNCLOS sets out to achieve and what future the youth are inheriting.

Like the unique, unrecognised youth lost beneath a foam of social pressures and disappointments, the deep sea is on the cusp of being exploited and abused. Perhaps our leaders’ hands are tied and they must play their villainous role in allowing capitalists into the womb of the world? Perhaps our sole duty is to defend against that with our wasted youth on the line. Whatever your stance, my fellow South Africans, I appreciate you listening to us, the youth, and letting us at least voice our concerns against this recklessness before the end is upon us all.

• Youth4MPAs representative Khalid Mather grew up on the KwaZulu-Natal north coast and has, through his family and community, developed a strong appreciation for nature. He channels his passion about it, particularly the ocean, into action, advocating for a better world for people and nature. Youth4MPAs is a movement that developed among like-minded young people who want to advance protection of and appreciation for the ocean through engagement, activism and science. Khalid’s social media tags are @Earth_Khalid on Instagram and @Khalid_of_Earth on Twitter.

Suddenly, global firms are finding it a whole lot ...

They moved mountains to save one of SA’s most ...

This is our last chance to reset our relationship ...

How women are treated in African cultures is deeply flawed