Beware the authoritarian nutjobs who promise to clean up the ...

Unsurprisingly, voters are looking for something exactly unlike the ANC. But we should be careful what we wish for 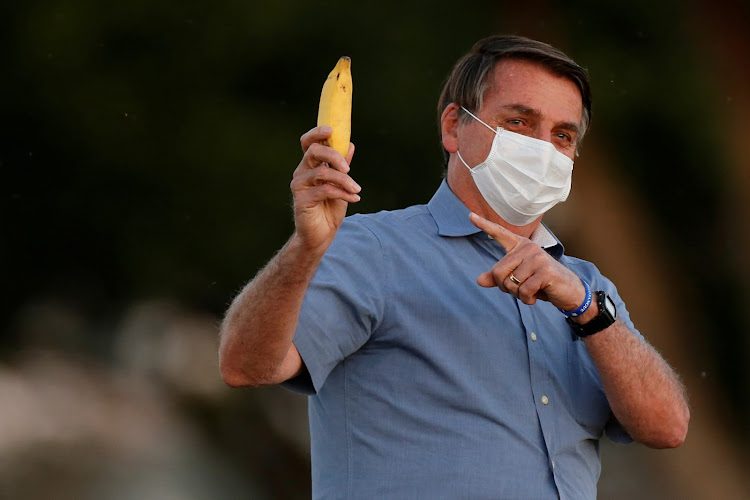 What a nana It didn’t matter to Brazilians that President Jair Bolsonaro was an incompetent, hate-mongering, Amazon-hawking far-right hustler.
Image: Reuters/Adriano Machado

Corruption has rotted our government and institutions. It has eroded our faith in each other. But unless we are careful, it will also eat away at the foundations of what comes after the ANC.

For most of the past 10 years or so, my social media feeds revealed a wide gulf between admirers of authoritarianism and those who reject it.

The former were unapologetic about their desire to be sat on: China was regularly held up as model for dealing with corruption, while they praised Singapore and prayed that we might one day be blessed with a president like Rwanda’s Paul Kagame.

Those on the other side of no-man’s-land, who considered themselves liberal and progressive defenders of democracy, would respond (as I have) by pointing out that human rights in China are an oxymoron, that dissent and the press are heavily restricted in Singapore, and that Kagame’s political opponents have an awkward habit of simply disappearing.

For many years, this divide seemed absolute.

Now and then I watched a disgruntled liberal sink into despair and go goose-stepping disconsolately across the no-man’s-land, cursing the snowflakes and their cultural suicide, before puckering up for the ritual insertion of the tube through which they will be fed Fox News and Russia Today for the rest of their lives.

But for those who remained behind, such defections didn’t seem to cause any soul-searching. The defector, it was quickly agreed, had had some sort of emotional breakdown, or else had always been the sort of weak-willed person who dreams of being the doormat of powerful charlatans.

Recently, however, I’ve started seeing something new and alarming.

In small but increasing numbers, South Africans who still believe themselves to be progressive are looking across the divide at the grey walls topped with razor wire and portraits of square-jawed Big Daddies, and wondering aloud whether perhaps a little kragdadigheid might be worth it.

You certainly shouldn’t be surprised that they ignore your warnings about the dangers of populism and the authoritarian right.

What makes this so chilling is that these are not fanatics hopped up on fake news. They seem to know that authoritarianism inevitably takes much more than it promises. But they also seem to have convinced themselves, perhaps out of desperation, that there is a happy medium that can be found; a kind of Totalitarianism Lite, which, if done properly, will provide law, order and prosperity while only torturing, hanging or disappearing the people who really deserve it.

Left-leaning activists might argue that this shift is inevitable when South Africa’s political education has been left in the hands of Mark Zuckerberg and petulant frat-boys with podcasts.

But I think this explanation denies the extent to which people draw conclusions that feel logical to them, once the state’s hypocrisy and outright criminality reach a kind of saturation point.

Yes, some South Africans seem inexorably drawn towards authoritarian power systems, and yes, fake news and internet conspiracy theory have had a nightmarish effect on our collective consciousness.

But when a party like the ANC has spent a quarter of a century trumpeting leftist solidarity with the poor, and then reveals itself as nothing more than a vast extraction machine that has pushed the country to the edge of the abyss, you really can’t be surprised when people start pushing in the opposite direction. You certainly shouldn’t be surprised that they ignore your warnings about the dangers of populism and the authoritarian right.

That’s because I suspect their reaction no longer feels political: instead, it feels like self-preservation, informed by common sense: “Oh, you’re ‘the left’, are you? Well that puts me firmly on the right. All of this has been part of a ‘revolution’, you say? Well then sign me up for the counter-revolution. This wasteland of neglect, nepotism and bureaucratic paralysis is because you prefer government based on collective decision-making? Please excuse me while I find a candidate who couldn’t be less like you.”

And so when that candidate arrives – perhaps a one-man show, promising to execute criminals and keep out foreigners and Make South Africa Great Again – people who were once genuinely progressive, before everything was sold for scrap and we rode the ever-lowered bar down into the muck, shrug and say: “Well, he’s a bit over the top, and I’d prefer it if he wasn’t always flanked by soldiers in dark glasses, but perhaps it’s worth it?”

This is how, in 2018, 55% of Brazilian voters elected Jair Bolsonaro as president. It didn’t matter that he was an incompetent, hate-mongering, Amazon-hawking far-right hustler. All that mattered was that he hated the leftist hypocrites who had ruled – and robbed – Brazil before him.

Many South Africans are praying for the ANC to be replaced by something entirely unlike the ANC. But until we have remembered what it is we once wanted, back before it all got so dirty, perhaps we should be careful what we wish for.

Spurning graft for work just goes against what we ...

A small Big Man in pointy shoes is foiled by ...

EDITORIAL | Having fun? Fab, but don’t be the cause of job losses and death