Post-Covid Africa will have to save itself. It is a terrifying ...

Covid-19 has forced the usual donor countries to look after their own, which spells disaster for the continent 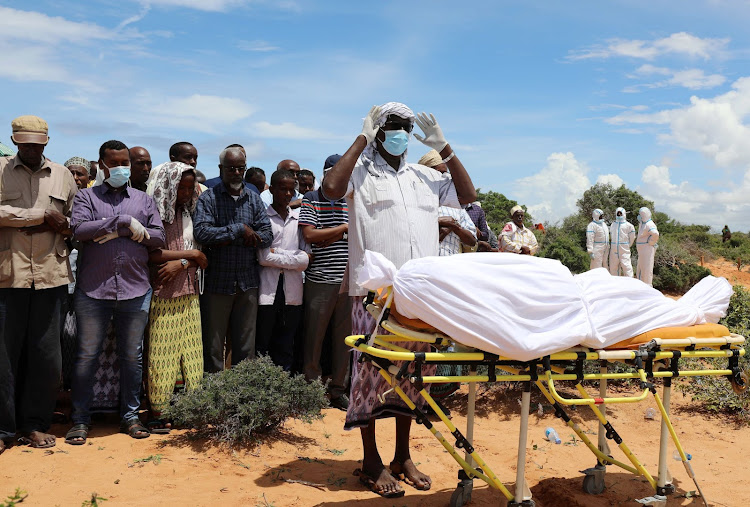 Wait and pray Civilians pray in front of the body of a man suspected to have died of Covid-19, before burial in Madina district outside Mogadishu, Somalia, in April 2020.
Image: Reuters/Feisal Omar

African countries, with their lack of quality leaders, weak states and little fiscal reserves, face economic, political and social disorder because of the devastation caused by Covid-19.

It is very likely that many African countries will experience increased debt, unemployment and social disorder. Many countries may regress to the terrifying instability of the 1970s, when African nations were characterised by economic stagnation, social unrest and coups.

The countries that have more successfully dealt with Covid-19, such as South Korea, Singapore and New Zealand, have three things in common: quality leadership, capable states, and substantial financial reserves following prudent management of their finances.

Industrial countries have had to unroll large bailouts to tackle the financial crisis fuelled by Covid-19, which will put pressure on their public finances for years. They have very little remaining to provide the kind of financial support to African countries they provided during previous epidemics.

Some industrial countries producing critical medicines, equipment and food stopped these vital items from being exported to poorer countries,  using them locally instead.

The European Union imposed temporary restrictions on the export of medical protective equipment from within the bloc.

As socio-economic conditions worsen in the aftermath of Covid-19 many African countries may see rising coups in which autocratic governments are ousted violently.

The US was accused by German biopharmaceutical firm CureVac of wanting to procure exclusive access to a coronavirus vaccine the company was developing. German ministers reacted with anger to the US offer. India curbed exports of basic medicines, such as painkillers, so that they could be used by its own citizens.

Global trade wars preceded the Covid-19 outbreak, with the US battling China, and Russia and Saudi Arabia embroiled in an oil price war. In June 2020, the US threatened the EU with stricter tariffs. Tensions have escalated between China and India over disputed border territory in the Himalayas. India is putting restrictions on Chinese trade, businesses and interests in India.

They formally withdrew from the United Nations Educational, Scientific and Cultural Organisation (Unesco) on December 31 2018, accusing the organisation of anti-Israel bias. Unesco had criticised Israel’s occupation of East Jerusalem, and granted Palestine full membership in 2011. The US withdrew its funding from Unesco. US President Donald Trump said in June 2020 he would formally withdraw the US from the World Health Organisation, accusing it of being under the control of China. Its withdrawal from the WHO means there are fewer resources to support African countries struggling with Covid-19 than there were when these countries battled previous epidemics.

Many African countries have undermined their own Covid-19 recoveries by blaming conspiracies for the spread of the virus, and therefore not acting decisively, using untested quack treatments under the guise of “traditional” African medicine and local “solutions” and shutting out WHO help.

The International Monetary Fund estimates that some African economies could contract as much as 8%. The World Bank showed that up to 30 million people are at risk of extreme poverty in sub-Saharan Africa because of Covid-19. The exports of Africa’s commodities have declined following contractions in industrial economies. African countries have experienced large revenue losses. The already poor capacity of many African governments has been severely undermined during Covid-19, and many governments are unable to deliver essential services.

Multilateral organisations must attach democracy conditions to their Covid-19 funding, such as compelling countries that receive funding to govern honestly.

Africa’s tourism, hospitality, media and transport sectors have been badly hit, with businesses closures, job losses and halted investments. The African Development Bank said in a research note that Africa’s tourist-dependent economies will decline by up to 10%. The economies of its oil exporters will decline up to 4%. The latter were already battered following the fall in oil prices owing to the oil price war between Russia and Saudi Arabia. Covid-19 has resulted in further oil-production cuts.

Hunger, starvation and food shortages will continue as local and global food production and imports decline because logistical networks and supply chains are disrupted. Africa imports 85% of its food.

The IMF estimates that Africa will need $110bn (R1.85-trillion) in new funding in 2020 to tackle the socio-economic impact of the pandemic. The fund has provided Covid-19 support to many African countries in the form of emergency loans and debt-service relief initiatives. And it has distributed $10.1bn in emergency lending or augmentation of existing lending to 29 sub-Saharan African countries.

The IMF has provided debt-service relief for 21 sub-Saharan African countries for an initial six-month phase ending mid-October 2020. It has also provided a debt-service suspension for highly indebted African countries as part of an initiative started by the Group of 20 leading economies that waived up to $14bn in payments for poor countries, most of them African. Nevertheless, Covid-19 will increase African debt levels.

In addition, many African countries have autocratic measures to enforce compliance with Covid-19 measures. The hard-handed measures have prompted anger, protests and defiance from citizens against leaders and governments – which may continue as socio-economic conditions worsen in the aftermath of Covid-19. Many African countries may see rising coups in which autocratic governments are ousted violently.

Others will see a rise in terrorist attacks, as terror movements see an opportunity in rising poverty, the collapse of public service delivery and popular anger against autocratic governments, to recruit members, serve as alternative service providers and to unleash terror campaigns. Africa may see devastating food riots.

It will be crucial that African civil society be included in Covid-19 funding from multilateral organisations such the World Bank and IMF.

Furthermore, these multilateral organisations must attach democracy conditions to their Covid-19 funding, such as compelling countries that receive funding to govern honestly, respect human rights and uphold freedom of expression. African media, civil society organisations and watchdog organisations must ensure that Covid-19-related funding is used honestly, prudently and equitably.

African governments will have to govern more honestly, inclusively and caringly. African countries will have to muster the political will to genuinely form a free-trade area, trade more with each other and use their own resources, skills, business and civil society capacity better.

• William Gumede is associate professor, School of Governance, University of the Witwatersrand, and author of South Africa in BRICS (Tafelberg).

SA’s electoral system needs an overhaul to give ...

If SA’s economy is to survive Covid, this is the ...