All the forces of the ANC old guard are lined up to defeat Ramaphosa’s anti-graft drive. It is his defining moment 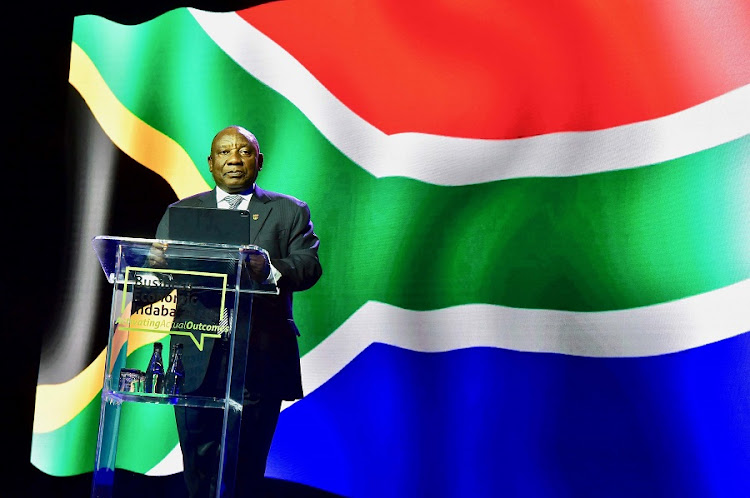 THE NATION BEHIND HIM President Cyril Ramaphosa.
Image: Elmond Jiyane/GCIS

The outcome of this weekend’s special ANC national executive committee will indicate whether President Cyril Ramaphosa is firmly in control of his party or a weakened lame duck .

Ramaphosa is expected to issue a marching line to party leaders that Luthuli House ditch the culture of being corruption-tolerant – which has seen leaders with serious allegations of corruption being promoted to cushy state jobs.

The president will seek to avoid what happened in the last two NEC meetings. The June NEC meeting, even with Ramaphosa’s misgivings, decided to reinstate two party leaders from Limpopo – deputy chairwoman Florence Radzilani and treasurer Danny Msiza – despite their alleged role in the VBS Mutual Bank saga.

In another NEC meeting earlier this month, party leaders threw mud at each other, each faction accusing the other of being more corrupt.

Since then, the ANC in KZN has made an ethically unjustifiable decision to promote former eThekwini mayor Zandile Gumede to the provincial legislature.

Such decisions have made a mockery of Ramaphosa’s pledge to rid the country of corruption – which was his campaign ticket. Even some of those who backed his candidacy have developed serious doubts about his capability to fight the scourge. Public trust in his party and himself as a leader is also gradually diminishing.

That is why it is crucial that he stamp his authority.

Such decisions have made a mockery of Ramaphosa’s pledge to rid the country of corruption – which was his campaign ticket.

He has already set the tone for the weekend’s meeting by writing a strong-worded letter telling ANC members the governing party could no longer be lenient on wrongdoers.

“We cannot hope to win back people’s trust if allow cadres who are charged with criminal conduct for corruption to occupy positions of responsibility within government and our movement.

“Those charged are required to insulate the ANC from reputational damage arising from their personal challenges by stepping aside while their cases are being heard.”

He then listed a number of interventions, including forcing those accused to appear before a strengthened integrity committee, conducting lifestyle audits and developing clear policy about family members of party leaders doing business with the state.

“Those who see the ANC as a path to wealth, to power, to influence or status must know that they do not belong in our movement. They must change their ways or leave.”

This must have struck a nerve with his opponents. They unleashed another tainted individual, Nelson Mandela Bay councillor Andile Lungisa, to counter Ramaphosa’s message by calling on the ANC to investigate how the president’s ANC campaign was funded.

Lungisa, who recently quit a mayoral committee post after an instruction from Luthuli House to do so when he was found guilty of assault, wrote to the ANC national officials asking that Ramaphosa be dragged before the integrity commission. Lungisa wants the ANC to take steps against Ramaphosa for raising funds to campaign ahead of the Nasrec conference.

He said raising money was against party tradition and that suggested delegates may have been bought to vote for him.

Lungisa’s letter was a pre-emptive strike meant to mobilise Ramaphosa’s detractors ahead of this crucial meeting. The anti-Ramaphosa faction is expected to read from the same script as Lungisa when the call is made for people facing corruption allegations to step down. In addition, they will point to recent corruption allegations linked to Ramaphosa’s spokesperson Khusela Diko.

Ramaphosa’s supporters say the president will be firm on the need to implement the Nasrec resolutions that leaders facing corruption charges should step down. This is a short-term solution targeted at individuals such as Gumede and home affairs portfolio committee chairperson Bongani Bongo, who is facing attempted bribery charges.

The long-term plan is to deal with the long list of those have been mentioned in the Zondo commission of inquiry and Covid-19 corruption as and when they are charged. This list includes Ramaphosa’s backers, but his detractors will oppose it, as this may catch up even with those who sit at the top table with him.

That is why Ramaphosa’s cleanup plan will face resistance in the meeting.

It is up to him to revive public trust in the party by putting his foot down. If he fails he risks going down in history books as another party president who allowed corruption to flourish under his watch.

Ndabeni-Abrahams is a huge, embarrassing misfit ...

Ace up her sleeve: ousted Durban mayor moans to ...

The rise and fall (and possible resurrection) of ...

An economy for a rainy day: Cyril looks beyond ...

Own up or get out: Cyril goes on rant against ...