God bless, Captain America: behold the cinematic universe of US ... 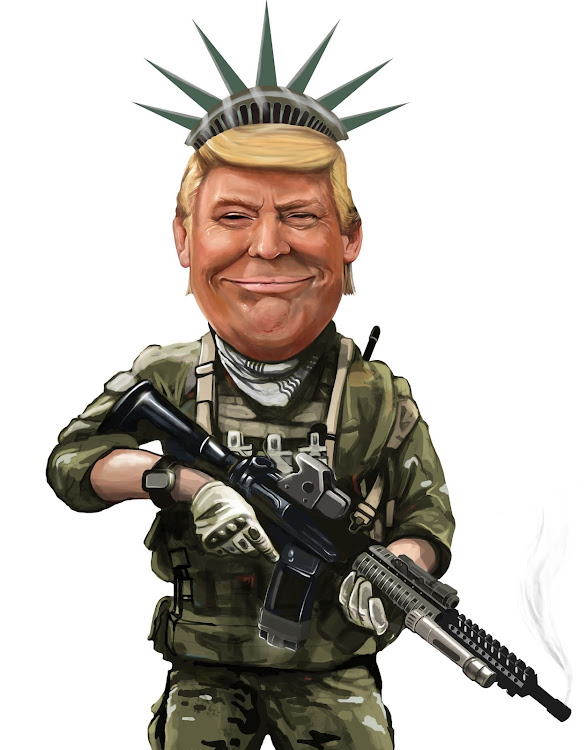 It was always going to be difficult for media organisations to cover the Republican National Convention, currently under way in North Carolina.

Left-leaning media groups exhausted their thesauruses in about 2016, using up all the choicest insults and juiciest condemnations back when we still believed that humans could be influenced by words and that liberal outrage might give conservatives pause rather than an erection.

Four years later, all they’ve got left are disbelieving shakes of the head and long sighs: “Oh Jesus, how is this happening?” might have worked as political commentary in the first months of Trump’s presidency, but now it just sounds like someone watching Real Housewives. Which, I suppose, is a lot like watching Republican politics. But still, you see my point.

For the right-leaning media, the struggle has been more physical. Delivering fart-catching sycophancy straight to camera is difficult at the best of times, but when you’re doing it in the service of a badly written Bond villain, while simultaneously fighting back tears of pure overwhelm and having orgasms in your pants along with all the other screaming Rhine maidens in the torch-lit stadium, well, that requires special skills.

Those in the middle have their own problems.

Some have expressed concern and confusion about how to report on the RNC without also repeating the endless stream of lies and nativist paranoia pumped out by speakers.

The US is now a country in which tens of millions believe that the Democratic Party ... is literally a Marxist revolutionary movement.

There’s also the issue of who, exactly, these pundits are speaking to: the middle has been dragged so far to the right that it’s hard to know where to aim.

The US is now a country in which tens of millions believe that the Democratic Party – a party still entirely committed to eating the planet so that every American can have an SUV and steak once a  day, and which escalated Republicans’ drone wars – is literally a Marxist revolutionary movement. No wonder even many Democrats believed that Bernie Sanders was an unelectable radical, what with his vision of inflicting on the US the sort of dystopian hellscapes currently ravaging Scandinavia.

All of which is why you probably didn’t read Vox’s coverage of the first day of the RNC this week. If you’re on the right or in the “centre”, you probably avoid Vox like the plague, and if you’re on the left, it’s possible you believe that Vox is the wrong sort of left, much as the Judeans’ People Front wasn’t the People’s Front of Judea.

But I would like to take a moment to recognise Vox’s coverage for one absolute gem, which, unlike so much of the endless churn around US politics, provided a beautifully clear insight into the current moment.

In an article about the biggest winners and losers of the RNC, it referred to “the Fox News cinematic universe”.

For the uninitiated, a “cinematic universe” is an idea spawned by the emergence and dominance of superhero films, which have seen Marvel (and, much less successfully, DC) comic-book characters thrown together in a vast, decade-long, multisquillion-dollar soap opera.

The result is a form of entertainment in which everything is deadly serious and constantly jokey, ultra-violent and entirely bloodless, compelling and silly, epic and deeply parochial. The stakes are the survival of the universe, and whether Peter Parker will be able to tell MJ that he fancies her. Everything means everything and nothing.

Most of all, it is escapist; a parallel reality in which a dull, limited, tragically unloved trust-fund boy can grow up in New York, put his name on a building like the oligarch he is, but also be adored as a fighter of crime and a bastion against invasion by outsiders.

Bruce Wayne, Donald Trump, Tony Starke, POTUS: it’s all the same cinematic universe, an endless assault on the eyes and ears, full of bangs and bumps and soaring moments and monstrous enemies who have to be destroyed so that America can be saved.

Please God let there not be a sequel.

Spurning graft for work just goes against what we ...

A small Big Man in pointy shoes is foiled by ...

You don’t need LSD to chase pookas, hybrid bananas and bunnies Down Under

EDITORIAL | SA, we have a culture problem