In point of faction: the ANC is split down the middle, so SA is ...

Party infighting means we can’t take urgent steps to fix the country. This puts us in a very dangerous place 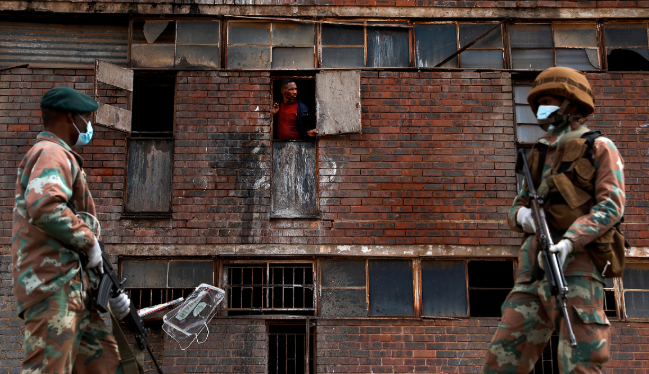 Tinderbox When there are protests, police and soldiers take the law into their own hands. Communities respond.
Image: Alon Skuy

SA is now headed back to some sort of post-Covid-19 new normal. That new normal is, however, unlikely to extend to the politics of our country. Pretty much everything stays the same there.

The ANC is as divided as ever, meaning that any talk of a new, clear-eyed post-Covid-19 focus on implementation is just a pipe dream. All the pre-crisis factions and divisions are playing out exactly as they were just six months ago. The players are the same, the faction leaders the same and even the modi operandi are the same.

Can the ANC rejuvenate? The answer is a simple no.

Last week saw the pro-Jacob Zuma, Ace-Magashule-supporting ANC factions piling on the pressure on their besieged president, Cyril Ramaphosa. They went for him on an issue he cannot evade: corruption. He cannot evade it because he has not shown much energy in fighting it despite two and a half years in office.

The uMkhonto weSizwe Military Veterans Association president, Kebby Maphatsoe, said the organisation – which has some very young military “veterans” among its ranks – “demands that all corruption be cleaned out without fear or favour”.

Maphatsoe said looting during the Covid-19 pandemic was a “litmus test” for Ramaphosa and the MKMVA. He said he would request an urgent meeting with the ANC top six to raise the MKMVA’s concerns.

“The MKMVA demands that all corruption be cleaned out without fear or favour. This will only be possible if factionalism is rooted out,” said Maphatsoe. That’s rich. This is a man who stoutly defended Zuma for 10 years while the MKMVA took free shares in Gupta family businesses. He only thinks corruption is bad today when his organisation is not getting a cut.

In the absence of jobs, xenophobia rises, stoked by leaders who point fingers at ‘the other’ to apportion blame instead of fully examining their own failures.

Meanwhile, another Zuma-leaning body and its leader, the ANC Women’s League president Bathabile Dlamini, told the Sunday Times that investigation of Covid-19-related corruption should not just focus on the purchase of personal protective equipment – and the ANC must investigate itself.

Despite reports that ANC secretary-general Ace Magashule’s sons and close associates benefited from the emergency procurement of PPE, and that the husband of Khusela Diko, Ramaphosa’s spokesperson, received PPE contracts in Gauteng, Dlamini said the party’s top six should conduct the audits themselves.

“The president said in parliament that if his son is found to be corrupt, he will accompany him to the police station. I think if he can do that to his child, it means he can be objective. I have confidence in my leaders. I think they are going to use their objectivity,” she said.

As is usual with Dlamini’s utterances, one doesn’t know whether to laugh or cry.

Meanwhile, an organisation called the Gatvol Citizens of South Africa tried to march on the party headquarters in Joburg to demand the removal of Ramaphosa, as he had “sold out the country to his white and foreign friends”.

The national organiser of the march, Mduduzi Nkambule, an ANC member from the Free State, told Independent newspapers that the march was not driven by factions within the party. Ho hum.

These divisions mean that no serious policy can be implemented because Ramaphosa has to please both factions. He cannot push for arrests of state capture politicians because Maphatsoe and Dlamini will accuse him of going for one faction and being lenient on his own faction. He cannot defend the Reserve Bank or support National Treasury because he will be accused of being neo-liberal. He cannot trim government staff because the unions will support Magashule.

All the urgent actions needed to make this economy work better and attract foreign investment while creating jobs cannot be implemented, just as they haven’t been implemented in the past few years. They are the victims of ANC factional fighting.

Meanwhile, millions of people are losing jobs. With the tourism industry shut for international visitors, the pain will continue through to 2021 and beyond. There is pain now. There will be more pain in the future, no matter how much of an optimist you may be.

This situation places SA in a dangerous place. In the absence of jobs, xenophobia rises, stoked by leaders who point fingers at “the other” to apportion blame instead of fully examining their own failures. Other societal fissures appear. Those who can take their money, skills and investments out of the country will do so. The tax pool contracts. Inequality rises. Us versus them deepens.

As we saw during lockdown, it does not take much for autocratic tendencies to seep in. When there are protests, police and soldiers take the law into their own hands. Communities respond. It’s a tinderbox.

All that goes back to the fact that we are governed by a party that is split right down the middle and doesn’t know how to heal itself, even when faced with the clear and present danger of extinction.