The science of reopening schools must be looked at through the lens of inequality, not chances of infection 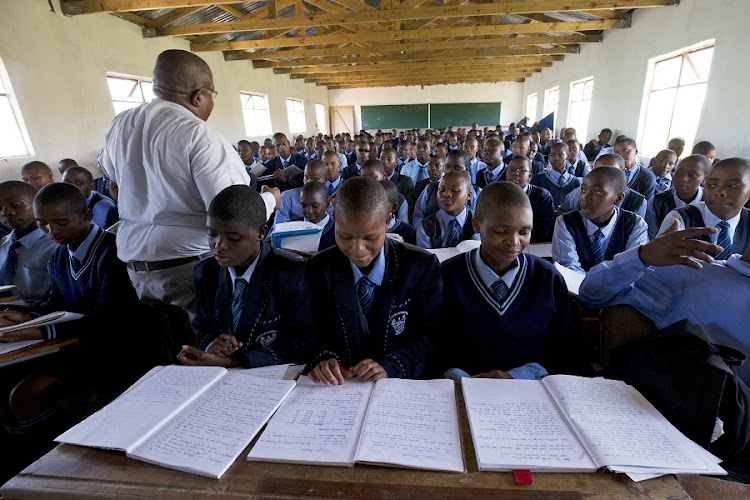 The reality Sadly, classrooms with a handful of children are the preserve of very few during the Covid-19 pandemic in SA.
Image: Sunday Times

SA has some of the best medical scientists on the planet. Most of them born in the country, attending schools and sometimes universities at home, some of these great minds have gone on to win the Nobel prize from laboratories in other parts of the world (Sydney Brenner, Aaron Klug, Michael Levitt, Max Theiler, Allan M Cormack) not to mention, of course, those giants of literature who won the ultimate prize (Nadine Gordimer, JM Coetzee).

It is because of these impressive scientists that our government has been able to benefit from the best advice on managing the coronavirus pandemic.

But these top scientists are not infallible. Like all researchers, they differ and fight among themselves. Like all human beings, they can become beholden to power (remember the Aids fiasco during the Thabo Mbeki years?). And sometimes their mistakes can be costly.

Now, as the most recognisable face of the medical science community during the pandemic, Saleem Abdool Karim recently told me: “Nobody is absolutely right or absolutely wrong” about when and how schools should reopen.

He is right in the sense that the emerging data on Covid-19-related infections, illness and death change as informed opinion becomes solid research (in  the early days of the pandemic the US’s Dr Anthony Fauci argued that masks were unnecessary), as small investigations become larger studies and as cross-national research replaces locally based studies.

You can cherry-pick your data and make almost any argument that favours your personal views or political agenda.

Where our medical scientists become dangerous, however, is when they are blind to their own assumptions about their prescriptions for the public good. One particularly irritating habit is when the media asks a top scientist: “Would you send your child to school during this pandemic?” Often the South African response is: “Yes, absolutely.”

These scientists are from the upper echelons of society, live in the leafy suburbs where positivity rates are low, and send their children to SA’s top public and private schools.

These scientists are from the upper echelons of society, live in leafy suburbs where positivity rates are low and send their children to SA’s top public and private schools. Their children do not travel to and from schools in packed taxis. Their schools have all the mitigating measures in place, from small classrooms to running water to hand sanitisers to online learning options, for a blended education experience.

In that moment of media hubris, the journalist does not raise the question of inequality and the scientist sits there blissfully unaware that the answer to school reopening inside a pandemic depends on whether you live and school in the pleasant parts of Orange Grove or the squatter settlements of Orange Farm. If you can guarantee my child a classroom with 10 to 12 pupils spread across a large space, a hygiene regime that functions like clockwork, private travel to and from school, regular testing of teachers and other staff, I, too, might (re)consider my views on whether to send my child for face-to-face (literally) teaching.

What is further disturbing about scientists making bold statements about public education is that their disciplinary lens is focused narrowly on the relatively lower chances of infection, illness and death among children. It is as if children teach themselves, as if they cannot infect others, including the adults in the classroom, and as if they do not go back home to live with older and sometimes vulnerable family members. The bench scientists making these firm declarations about reopening are not experts on schools as organisations; they have little idea about how humans interact in this bounded facility for upwards of five hours a day and what this compact, congested and often chaotic environment portends for teaching and learning under conditions that are safe for the health of both children and adults.

Make no mistake, I love and respect the world of science which is what propelled me into an early career in science teaching. But I am also aware of the limitations of science not simply as an intellectual matter, but in a pandemic context where lives are on the line. For science to be effective it must listen more broadly before it speaks.

11 South Africans who have won the Nobel prize

MAX THEILER, PHYSIOLOGY OR MEDICINE, 1951
Dr Theiler became the first African-born winner of the prize when he successfully developed a vaccine to combat yellow fever. His work saw him earn the very prestigious position of director at the Virus Laboratory for the Rockefeller Foundation.

ALBERT LUTULI, PEACE, 1960
He led the ANC for 15 years between 1952 and 1967, and won the prize for his non-violent resistance towards apartheid. Tragically, he died after being hit by a freight train on a level crossing.

ALLAN M CORMACK, PHYSIOLOGY OR MEDICINE, 1979
Dr Cormack won his award for the integral role he played in the development of CT scanning technology. He studied at Harvard University in the US and spent most of his time between SA and America. In the 1950s, the University of Cape Town (UCT) and Groote Schuur Hospital there were the first places where these scans were ever trialled.

AARON KLUG, CHEMISTRY, 1982
The British-South African was a graduate of Wits University and UCT. He revolutionised science by advancing our understanding of how atoms are arranged in solid matter. His work with electron microscopes earned him the prize.

DESMOND TUTU, PEACE, 1984
The archbishop was rewarded for his tireless efforts to bring down apartheid by scooping the prize in 1984. He had lobbied many world governments, including a fierce showdown with then US president Ronald Reagan, and his activism was fondly admired across the globe.

NADINE GORDIMER, LITERATURE, 1991
One of SA’s most underrated heroes gained the attention of the international community in 1991, when she won the prize. Gordimer’s novels railed against the racially exclusive government and, as an active ANC member, she was a close friend of former president Nelson Mandela.

NELSON MANDELA AND FW DE KLERK, 1993
With Madiba, we come to the most famous entry on our list. For negotiating the end of apartheid rule and orchestrating the first democratic elections in SA’s history, Mandela and De Klerk picked up the accolade thanks to their negotiating skills.

SYDNEY BRENNER, PHYSIOLOGY OR MEDICINE, 2002
Brenner was part of the team that created the first computer matrix analysis of nucleic acids using TRAC. Translated into English, the Germiston-born scientist helped map the fabric of human DNA.

JOHN MAXWELL COETZEE, LITERATURE, 2003
This year marked for the first time SA could boast back-to-back winners. The studious Coetzee wrote dozens of acclaimed essays, critiques and books, including Booker Prize-winning works such as 1983’s "Life & Times of Michael K" and 1999’s "Disgrace", which earned him the highest of all nods.

MICHAEL LEVITT, CHEMISTRY, 2013
Finally, our most recent winner took the prize five years ago. The Pretoria-born professor was recognised for his efforts with “the development of multiscale models for complex chemical systems”. His molecular research became a pioneering source material for the next generation of scientists to succeed him. - thesouthafrican.com

It’s all doom and gloss in the afterlife

Cyril has squandered the main thing he needs to ...

Sadtu is right to stand up to Angie. Teachers’ ...

How physicians healed their own hospital when Covid rocked its foundations