If SA is outdone by Bibi and Trump, we must be in dire domestic ...

If SA is outdone by Bibi and Trump, we must be in dire domestic straits 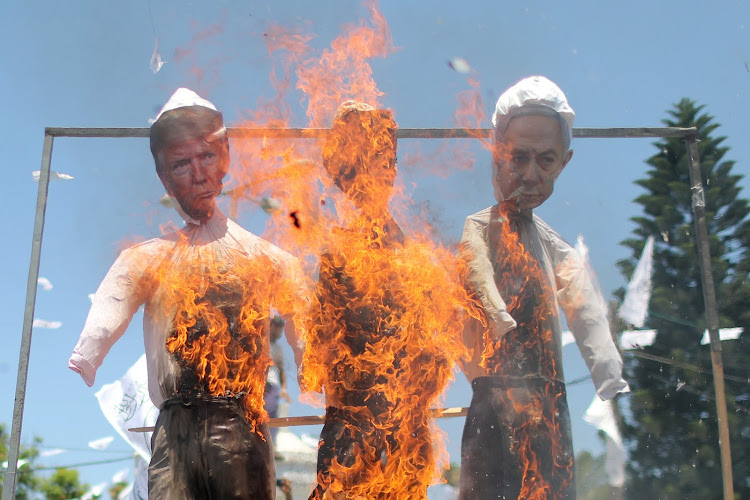 Low bar US President Donald Trump and Israeli Prime Minister Benjamin Netanyahu are not exactly in the running for a Nobel Peace Prize, but still have more to show for the foreign policy efforts than SA.
Image: Reuters/Mohammed Salem

In Israel, Prime Minister Benjamin Netanyahu is facing unprecedented crises, several of his own making: his improbable coalition government  – which spans far-right, right and moderate centre parties, secular and ultra-religious factions – is unravelling. The spectre of a fourth general election in just two years haunts its weary citizens. His early call in May to Israelis to “go out and have a good time” after appearing to interdict coronavirus had curdled, by July, to mass protests as second-wave infections spiked to more than 2,000 new cases per day. Now in his 11th year in power, the longest span of any Israeli prime minister since the founding of Israel in 1948, he has also been indicted on corruption charges and goes on trial in the new year.

Yet, living up to his nickname “The Magician”, Bibi as the prime minister is universally known, managed to pull an extraordinary and unexpected rabbit out of his diplomatic hat last week.

Choreographed by another embattled incumbent, Donald Trump in the White House, the announcement that the United Arab Emirates (UAE) would confer diplomatic recognition on Israel was momentous in part because of its rarity. The UAE is only the third Arab nation in 40 years to establish official links with the Jewish state. More remarkable, unlike the Camp David Agreement, which obliged Israel to hand over its conquered lands in Sinai as the price of peace with Egypt, the UAE agreement only required Israel to “delay” its intention to annex a swathe of West Bank Palestinian territory.

Of course, Bibi – who talks hawkishly but moves moderately – probably did not intend to go this route anyway. But it was a useful bargaining chip, even though the current breakthrough leaves the final status questions around Palestine unaddressed. In fact, as Thomas Friedman noted in the New York Times, the Palestinians lost their biggest diplomatic card: the assumption that moderate Arab regimes would not recognise Israel until it had established a Palestinian state.

One can objectively wonder whether we have a foreign policy at all or even the need for our own foreign ministry. Zimbabwe ... is the case in point.

The UAE move, likely followed by Bahrain, Oman and even perhaps Kuwait, shakes that assumption. Ironically, it could hasten a peace negotiation since the Palestinians, stripped of the sine qua non of no-peace-with-Israel-until-Palestine-is-established, could be forced to the talks table with Israel. And while the largest and most influential Sunni regional power, Saudi Arabia, remains muted in its response, it is inconceivable that the UAE deal happened without its active and back-door encouragement.

All this, of course, is a huge slap in the face for Iran, which has lost the most in the process. This just a week after its interests and influence, via Hezbollah in Lebanon, were shaken with the furious public reaction to the government (and the influencers such as Hezbollah) for its multiple failings resulting in the port explosion in Beirut.

SA, which practices a foreign policy of wearying predictability – of non-interference in domestic affairs of other countries bar Israel – managed in its formal comment to maintain its holier-than-thou in the Holy Land posture. It expressed “regret” at the announcement of the UAE move, a strange posture for a government that proclaims the virtue of diplomacy over conflict. The official department of international relations and cooperation statement simply parroted the lines of the Palestinian authority, Iran and Turkey on the issue. It also completely underestimated – or ignored – the geo-strategic implications of the alignment between Israel and a brace of Sunni-Arab states as a counterpoint to Shia power in Iran.

Closer to home, one can objectively wonder whether we have a foreign policy at all or even the need for our own foreign ministry. Zimbabwe – where our influence is as massive as it is irrelevant in the Middle East – is the case in point.

First there is the question of personnel: we have a capable foreign minister, Naledi Pandor, and she is assisted not by one but two deputy ministers, neither of whom (Ms Mashego-Dlamini and Mr Botes) have, it is true, impressed themselves on the wider world.

Then outside this troika, in the true centre of power in the ruling ANC, there is its head of international relations, Lindiwe Zulu, whose day job is intensely domestic: she is the minister of social development.

So, when the crisis, or year 20, of the same saga in Zimbabwe erupted yet again in Harare, Cyril Ramaphosa bypassed his overstaffed foreign affairs structures. He decided in his wisdom to name two political retirees, Baleka Mbete and Sydney Mufamadi, as his “presidential envoys” to collapsing Zimbabwe. They returned, denied a meeting with the opposition, empty handed after their brief foray across the Limpopo. The rights-delinquent, economically destructive Emmerson Mnangagwa regime was given a free pass to continue its oppressive ways. Just as SA has enabled it to do, sans action or even a harsh word, since 2000.

And the achievement of SA’s ‘quiet diplomacy’ of the past 20 years? Nil, zilch, zero.

“Crisis” and “Zimbabwe” have been conjoined in the same sentence for two decades now, but an endpoint is now clearly visible: opposition MPs abducted, tortured and sexually harassed; famous writers like Tsitsi Dangarembga arrested and the country on the edge of mass starvation: the UN estimates that “a rapidly expanding emergency” will see 10 million Zimbabweans in starvation condition by Christmas.

And the achievement of SA’s “quiet diplomacy” of the past 20 years? Nil, zilch, zero.

When a country lacks the foreign policy imagination and achievement of Trump and Netenyahu –neither of whom is in the frame to win the Nobel Prize for Peace exactly – then matters have reached an interesting juncture.

Roger Southall, professor of Sociology at University of Witwatersrand, reminded us last week that apartheid strongman, prime minister John Vorster, was far more effective in forcing his close ally, Rhodesian prime minister Ian Smith, to concede majority rule than the ANC has ever been in inducing democratic  change from its close allies in Zanu-PF’s leadership.

Then again, our foreign policy, to the extent it exists beyond a series of impulses and gestures aimed at re-litigating the cold war on behalf of the side which lost it – reflects our dire domestic straits.

It is weakly and haphazardly led and relies on yesterday’s ideas and the day-before-yesterday’s people to achieve it.

This virus has robbed gasbag Juju of oxygen - but ...

EDITORIAL | SA’s safety is yours to bear, so don’t mess up