US got Kamala Harris, a principled fighter with a voice. SA got ...

US got Kamala Harris, a principled fighter with a voice. SA got a poodle

David Mabuza is a heartbeat from the highest office, but he has proven himself to be a non-existent deputy 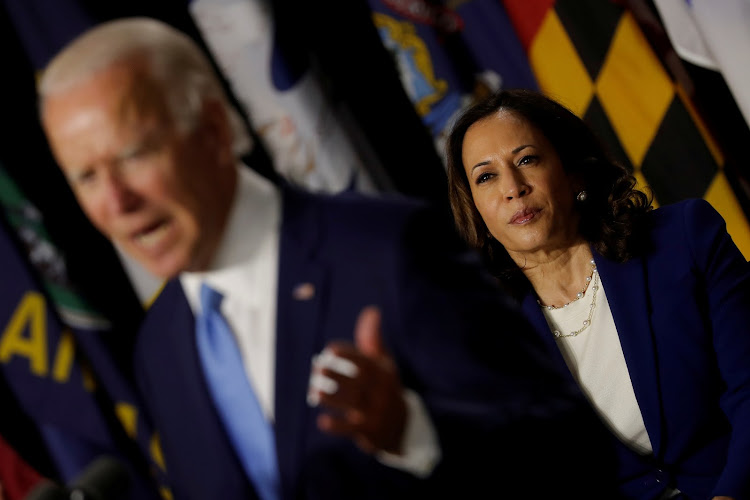 Smart move There are many reasons Joe Biden's choice of Kamala Harris as his running mate is astute.
Image: Reuters/Carlos Barria

Biden sent out a simple message and e-mail to supporters: “Joe Biden here. Big news: I’ve chosen Kamala Harris as my running mate. Together, with you, we’re going to beat Trump.”

The announcement is groundbreaking. The 55-year-old former prosecutor and attorney-general, the daughter of an Indian mother and Jamaican father, is the first black woman and the first person of Indian descent to be nominated for national office by a major party. Crucially, she is no “yes-woman” – she has taken on both Biden and parts of the political establishment on numerous occasions.

The reason Mabuza flashed through my mind was Biden’s age. If he is elected to the presidency Biden will be 78 years old on inauguration day in January 2021. If he keels over and dies, Americans will at least know they have someone present and capable to take over as commander in chief.

In SA, on the other hand, you have Mabuza. That’s the man who would take over. Who is he and what is he? What does he stand for? This is the man who often rushes off to Russia to get treatment for his mysterious ailments. SA institutions are not good enough for him. This is the man about whom we only hear when there is some or other palace intrigue in the ANC. He is politically in charge of Eskom – need I say more?

During the coronavirus pandemic his only presence has been to issue statements that he is alive. There has been no leadership, no guidance, no ideas, not even empathy for the suffering of South Africans, from that office. That’s the man who is only a heartbeat away from the highest office in the land.

Compare that with Harris’s nomination. First, Biden chose her. In Mabuza’s case, he was foisted on President Cyril Ramaphosa by the ANC. He is in office by virtue of his excellence in party politics (just like Ramaphosa, of course), not by virtue of his abilities in governance or by his showing as Mpumalanga premier.

His decision to pick her is, therefore, not just strategically astute but brave as well. He chose someone who took him on. Disagreement does not have to signify enmity.

There are many reasons Biden’s choice is an astute one and enhances his bid to become the 46th president of the US. A former prosecutor, she ticks the right boxes that the Biden ticket is not “soft on crime”, at least on the scale used by President Donald Trump. Significantly, she helps maintain internal Democratic unity on issues as varied as race and economic policy.

The most important part of Biden’s choice, however, is that he did not pick a poodle. He picked someone with a view and a voice, not a “yessir, thank you sir” deputy. He picked someone who has already demonstrated that she is prepared to stand up to him on matters of principle.

By most accounts the most dramatic moment of the democratic presidential debates in 2019 came when Harris took on Biden for opposing mandatory busing to achieve school integration in the 1970s and for speaking kindly about working with two segregationists in the Senate on other issues during those years. Despite Biden’s protestations, it was comprehensively shown that he was indeed against the system of busing.

His decision to pick her is, therefore, not just strategically astute but brave as well. He chose someone who took him on. Disagreement does not have to signify enmity.

The importance of the Harris choice is underlined by what is going on in the current White House. When concerns were raised about Trump’s grasp of detail and his Twitter obsession, reassurances were made that there was an “axis of adults” that stood between him and chaos. With just a few months of his first term left, those “adults” – from former defence secretary Jim Mattis to national security adviser John Bolton – have been kicked out or have left in disgust. Only his underwhelming vice-president, Mike Pence, has stuck around. Derided as a “yes man” even before he was picked, Pence has delivered in spades. Two months ago, as the coronavirus cut a deadly swathe through the US and criticism of the administration’s handling of the pandemic swirled, he wrote that “we are winning the fight against the invisible enemy”. He could not help but add that this was “a testament to the leadership of President Trump”. Seriously?

John Nance Garner, former US vice-president from 1933 to 1941, once said that the “vice-presidency isn’t worth a pitcher of warm spit”.

It may well be so. For Americans, given that Biden would be 78 when he is inaugurated, it will be a comforting thought that a potential successor would be someone with a voice and mind of their own.

South Africans have Mabuza, a man who has been exposed by the coronavirus as being a non-existent deputy president.