Thursday marked 75 years since the US devastated Hiroshima. We cannot let this happen again 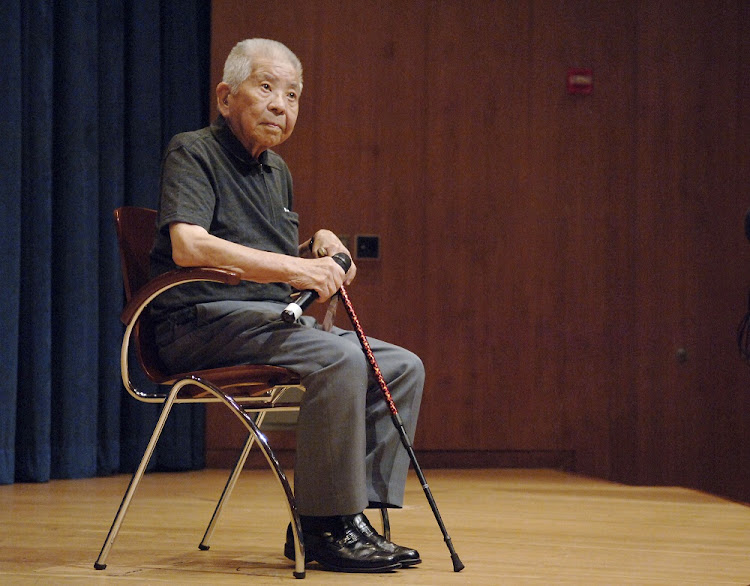 miracle man Tsutomu Yamaguchi was a survivor of the bombings of Hiroshima and Nagasaki, on August 6 and 9 1945, respectively.
Image: Jemal Countess/WireImage

Tsutomu Yamaguchi was 25 years old when imperial Japan attacked Pearl Harbor and drew the US into World War 2.

He was, he later insisted, opposed to Japan’s aggression in the 1930s and, as a draftsman for Mitsubishi Heavy Industries, helped design oil tankers rather than tanks. But as the war turned against Japan and his industry began to collapse, the looming prospect of a Japanese defeat seemed to have been an even worse idea: according to an obituary in the UK’s Daily Telegraph, Yamaguchi considered killing his family and himself with an overdose of sleeping pills.

This was by no means unusual in the final months of the war. Relentless propaganda insisted that American troops would unleash unimaginable barbarism on civilians should they ever take Japan. Shortly before the island of Okinawa fell to the Americans, Japanese troops made it clear what civilians needed to do: “The army had given us two grenades each,” one survivor told The Guardian in 2007. “They told us to hurl the first one at the enemy and to use the second one to kill ourselves.”

In the summer of 1945, however, Yamaguchi had not yet resorted to such nightmarish lengths and was still doing his job, 300km from home on a business trip, in Hiroshima.

Just after eight in the morning, on Thursday, 75 years ago, he watched a small group of American heavy bombers pass overhead. One of them dropped “two small parachutes”. The first nuclear bomb ever dropped on a city detonated 3km from where he stood looking up into the sky.

Astonishingly, he survived, albeit with severe burns on his back and ruptured eardrums. After spending the night in an air-raid shelter, he left the devastation of Hiroshima and began his journey to his home, down to Japan’s south-western corner: Nagasaki.

At 11am, three days later, he was back at work, describing his ordeal in Hiroshima to a highly sceptical supervisor, when the second bomb was dropped.

Again, the most destructive weapon ever unleashed on the planet detonated just 3km away from Yamaguchi. Again, he lived. And he went on living, for another 65 years, eventually succumbing to stomach cancer at the age of 93.

As the unimaginable killing fields of the 1940s drift out of living memory, and new existential anxieties dominate the news cycle, the annual acknowledgment of the Hiroshima bombing has dwindled, less a global moment of reflection than an editorial footnote.

The story of Yamaguchi was even turned into a joke on the BBC panel show, QI, eliciting strong complaints from Japan.

No country should have the power to end another at the flick of a switch.

Nuclear holocaust, we seem to believe, is past us. If we were going to kill each other and ourselves in the tens of millions, it would have happened in the 1970s or 1980s. Now, we tell ourselves, there are steadier hands on the button.

Certainly, there are fewer nuclear warheads in the world than during the height of the Cold War: stockpiles of more than 70,000 have been reduced to just less than 14,000. Ideologies, too, have shifted. Forty years ago, the US and the Soviet Union glared at each other across a gulf of incomprehension and suspicion. Today, the world’s largest hoarders of nuclear weapons are all ardently capitalist, and while conventional war is still extremely profitable, nuclear war, they surely all agree, is very bad for business.

But this is not really the point. Reducing nuclear stockpiles sounds admirable, but practically there is no difference between a world in which there are 70,000 warheads and one in which there are “only” 14,000: both is a world that can be ended many times over. I am also not sure capitalism’s powerful urge at self-preservation could save us from a murderous despot whose accountants had shown him how nuclear war might make him richer.

No, the fact is that one nuclear bomb is one too many. No country should have the power to end another at the flick of a switch. No society should have to live with the prospect, however distant it might feel, of instant, total obliteration. Nuclear weapons should not exist and any politician who encourages their development and stockpiling, rather than working to negotiate their continued dismantling, should be regarded with supreme suspicion.

The two bombs dropped in 1945 killed between 129,000 and 226,000 people. Those people were terribly, terribly unlucky. You could argue that Yamaguchi was bizarrely unlucky and then, astonishingly, miraculously lucky.

Seventy-five years later, however, the rest of us shouldn’t have to rely on luck. The bomb must be banned or it will be used again.

Hyenas can blame nature, so what’s the ANC’s ...

Get thee behind us, Bandile Masuku, but fear not, ...

By the time we find out what tricky Diko was up ...

The ANC has turned us into happy criminals, just ...

BOOK EXTRACT | Island of dreams: in search of a ...

Women superheroes are stepping out of the shadow of men