Cyril has squandered the main thing he needs to fight Covid – ... 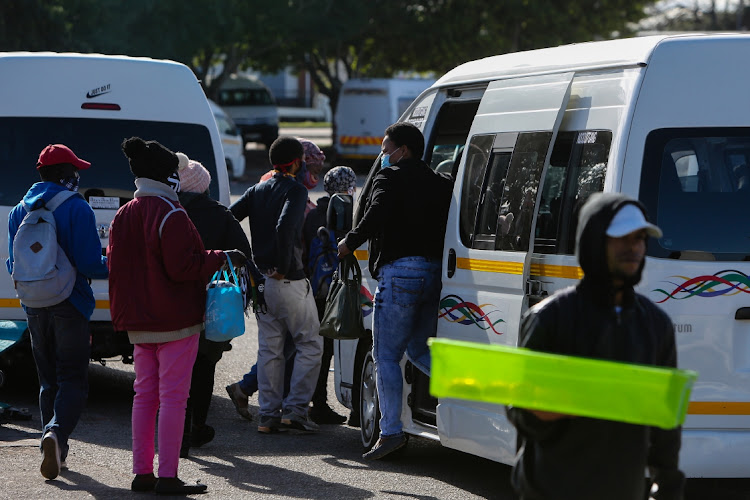 dangerous logic Most minibus taxis have resumed operations at 100% capacity, but it's fine, people, just open your windows and you'll be OK.
Image: Werner Hills

No, your head spinning is not a symptom of coronavirus infection. It’s because of the things that make absolutely no sense in a time of Covid. Things such as, why are we the only country on the planet that bans booze and cigarettes as ways of fighting the pandemic? Bewildering. (Full declaration: I am a non-consumer of both). It probably makes more sense to allow people some calming or distracting influences, given the isolation and anxieties so many experience with this extended lockdown.

Why do otherwise rational people do seemingly senseless things? To answer this question requires insight into human behaviour, especially during times of crisis. It makes no sense, for example, that so many Americans aggressively refuse to wear face masks, even though there is abundant evidence that the covering drastically reduces the chances of infection. Appealing to science will get you nowhere. Understanding what informs such puzzling behaviour helps.

Listen to the explanations. “It is my constitutional right to wear a mask or not. It is my individual choice. No government can tell me what to do.” What you are hearing is not selfishness, as many claim, but years of indoctrination lodged in extreme individualism and constitutional fundamentalism. So even with an unrivalled epidemic of gun violence, where schools are shot up and scores of children die, the right to bear arms (the second amendment to the US constitution) and my right to bear arms trumps any logical argument about even modest interventions, such as background checks on gun buyers. This behaviour, rooted in American culture, explains why infections, hospitalisations and deaths continue to march upwards in the US, while coming down drastically in European nations.

What people believe, says anthropologist Jess Auerbach, is a lot less important than that they believe it.

As we know all too well, doing senseless things extends into the political world. For example, it boggles the mind that President Cyril Ramaphosa would close schools for four weeks (July 27 to August 24) when his own advisers hold that the peak of infections will only be reached in about October. One of the most senior scientists advising government tells me that “if we were doing things on health considerations alone, we would be closing down everything”. The reason? “We had lockdown, but not containment.” The result? We are now on 12,000 cases a day, the fifth-highest number of infections in the world in terms of absolute numbers.

No matter how good you are as a black person, competence will be assumed to be white
Ideas
1 year ago

In other words, if the rational explanation for lockdown is to protect against rampant infections in a concentrated place of human occupation, such as a school, then four weeks is meaningless. It makes even less sense, from a public health perspective, to then invite back grades 12 and 7 one and two weeks earlier, respectively.

Which raises the question, how does one explain such confounding behaviour by the head of state? Simple. When your most powerful unions threaten to do what the virus already did, shut down schools (and society), you try to ward off the political embarrassment that will surely come with a compromise solution. Correct, this has nothing to do with community spread (of infections) and the danger posed to schools in those areas. Such decisions run on the same dangerous logic of packing taxis with human cargo (they must open their windows in winter, turning tragedy into farce) at the height of a pandemic; the taxi bosses must be killing themselves laughing.

When governmental decisions in a pandemic are based not on science but on political calculation, all kinds of contradictions come to the fore. Like swaying away from applying the “take-a-break” decision of the president to private schools. On the face of it, this is not only unfair — to disrupt the education of the on-average poorer schools in the public sector — it makes no sense as a health decision. Unless, of course, you take into account the political wariness of interfering in schools which pay for themselves and in which the public sector unions have little interest (apart from some of their leaders having children enrolled there). Which probably explains the decision of the latter-day resurrection of a school pupil protest group called Cosas (Congress of South African Students) (I last heard about them in the 1980s) to march on private schools to shut them down, too. Unfortunately, these protesting pupils did not realise that the privileged were on holiday and so wasted a march.

It is one thing to try to understand political behaviour; it is another thing to reckon with its costs. What the president and his government have squandered in the process is one of the most crucial assets in managing a pandemic — public trust.

Sadtu is right to stand up to Angie. Teachers’ ...

This is why Motshekga will absolutely not scrap ...