Unlike Churchill, the exemplar of political bravery, our president skirts the pressing issues, playing it safe 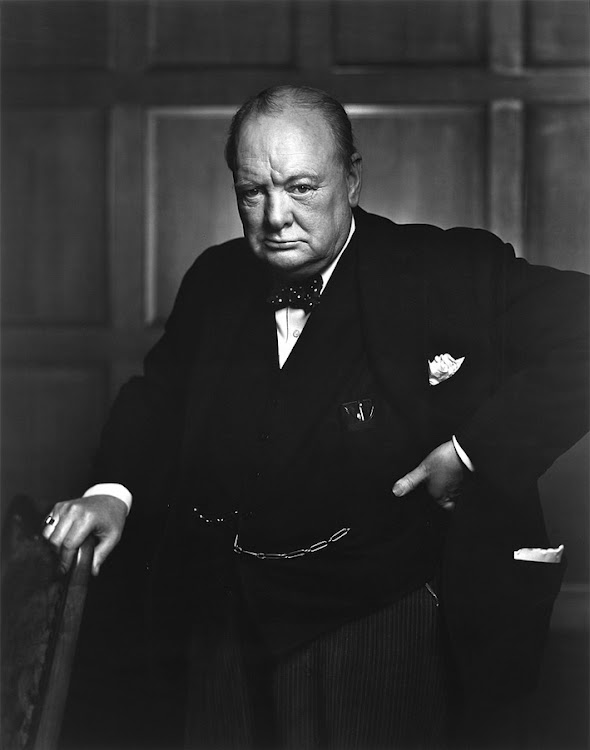 No sidestepping Winston Churchill had a file marked 'action this day', in marked contrast to our president.
Image: Wikimedia Commons

A few weeks back, and for the first time in more than a decade, I addressed a parliamentary caucus of the Democratic Alliance, on the party’s 20th anniversary.

These current dire times dictate virtual Zoom meetings as the new normal. So, I was unable to gauge the body language of my audience that day; and I have no idea whether my random thoughts on the menu for the rigours of political endurance and – just sometimes – success registered.

What did register with me was a question from an MP. She asked what single attribute of leadership, in my opinion, was the most essential.

The question chimed with some writing I have been doing on a new book, so happily the inquiry had a ready answer and exemplary authority. I suggested that courage was the essential prerequisite for leadership and offered the 20th century exemplar of this in politics, Winston Churchill. He said: “Courage is the first of human qualities because it is the quality which guarantees all others.”

A new book, Demagogue, by Larry Tye, the best-selling American author and journalist, concerns a politician at the other end of the political spectrum from the British statesman, the US red-baiting senator Joseph McCarthy. Tye, in an interview with the New York Times, touched on the behaviour of US President Dwight Eisenhower toward his fellow Republican, McCarthy. Eisenhower, an exact contemporary of Churchill, who effortlessly won two terms as president on the back of his military credentials as Supreme Allied Commander in World War 2 in Europe, was not exactly a profile in courage in taming or even tackling McCarthy.

Tye recounts that while McCarthy’s antics and unsubstantiated smears were ruining careers and destroying lives and livelihoods, Eisenhower’s brother and adviser, Milton, urged the president to “give up some of your popularity and take on this guy”. This the president, who detested both the senator and his methods, refused to do: “Behind the scenes he was orchestrating things (but) he was waiting for McCarthy to self-destruct.” The self-destruction took a long time, while the immensely authoritative president stayed his hand, refusing even to give a speech in defence of his wartime fellow general George Marshall, whom McCarthy recklessly attacked as a fellow traveller of communism.

Not giving up popularity to meet an essential current need or confront a crisis is a key explanation for much of the mediocre leadership in the world, and this country, at a time of unfathomable crisis.

During the last (far less severe) global economic crisis in 2008, the cynical Jean-Claude Juncker offered of the timidity of his fellow European leaders: “We all know what to do, but we don’t know how to get re-elected once we have done it.”

He is spoilt for choice in showing some mettle or signalling that his once proclaimed New Dawn is not in fact a fading twilight.

A decade-plus later, at least the Euro leaders (minus Juncker these days) have found their courage. On Monday, after a marathon five-day session, EU leaders agreed a package of measures worth $857bn containing unprecedented steps to help less wealthy European countries “confront the gravest challenges in the bloc’s history”, as one report suggested. Normally economically prudent Germany led from the front on the issue. Perhaps since Chancellor Angela Merkel is not planning to stand for re-election in 2021 this confirms the Juncker thesis.

Here at home our president declines beyond clichés and vacuous nostrums to spend any of his considerable political capital on confronting the real causes of the economic and health catastrophes that have hit SA.

He is spoilt for choice in showing some mettle or signalling that his once proclaimed New Dawn is not in fact a fading twilight. He could put his foot down on the ANC decision to restore two political rogues from the VBS scandal to office in Limpopo. Mindful of his previous commitment on the Israel-Palestine situation to stand up for oppressed minorities, he could offer at least words of comfort to the 12 million Muslim ethnic Uighurs in China whom the Chinese have placed in concentration camps. Maybe he could offer some reassurance or even an intervention in the Islamic State insurgency in northern Mozambique. Utter bewilderment – and a pending court case – confronts economic decision makers on the fate and future of SAA. Is the government planning a bailout? What does the “mobilisation of funding” for the airline by the state mean?

Then there is the state of state hospitals everywhere bar the Western Cape. The scenes of squalor and maladministration and neglect at Livingstone Hospital in the Eastern Cape, courtesy of a BBC television exposé, internationalised SA’s corroded response to the pandemic. It was almost reminiscent of the bad old days of apartheid when international television stations would go under cover and report to the world on the horrors of the racial regime doing its damnedest to dehumanise its people.

Not one of the above topics featured in Ramaphosa’s weekly newsletter. In the absence of any meaningful public engagement by the president – who shuns proper press conferences and pops up only every four weeks for ever more stilted national broadcasts – this is the only inkling of what preoccupies the presidential mind.

This week the only topic he addressed was that the youth must pursue self-employment, citing some random success stories of start-up entrepreneurs. Even on this subject, Ramaphosa has no form, since he never in his pre-presidential days attempted to run a small business from scratch.

Even if any of these small businesses become successful they would immediately be subject to attack by the vultures of the state.

A friend of mine who is an eminent lawyer well versed in the obstacles placed in front of would-be businesses in this jurisdiction, sent the following response to the president’s suggestion:

“A good idea, but I wonder how many businesses the president refers to are actually complying with the millions of laws and regulations applying to businesses in SA? How many of them are unionised? How many comply with all the regulations, give their workers all statutory rights, pay minimum wages, holiday pay, etc etc.

“The answer to all these questions is obviously ‘none’, so that even if any of these small businesses become successful they would immediately be subject to attack by the vultures of the state – the unions, the so-called law enforcement authorities and the army of regulators. And they would have no means of defending themselves at law.”

If you can remember back to the dawn of “Ramaphoria”, the president promised to ease the burden of doing business and take an axe to the thicket of regulations and to promote business-friendly policies. No sign of any of that, and even on the “safe topics” Ramaphosa chooses to address the credibility chasm ever widens.

Churchill, the exemplar of courage in politics, had a file marked “action this day”. Our president, by contrast, seems to defer each difficult decision, large and small, into the mythical “file 13” where inconvenient topics are buried.

But for hard-pressed South Africans in business, or more likely these days out of work, the writing is on the wall. Except for Ramaphosa who seems to think it is addressed to someone else.

Oh, go on, let SA’s very own Marie Antoinette eat all the cake

EDITORIAL | Shut down the depraved cashing in on Covid