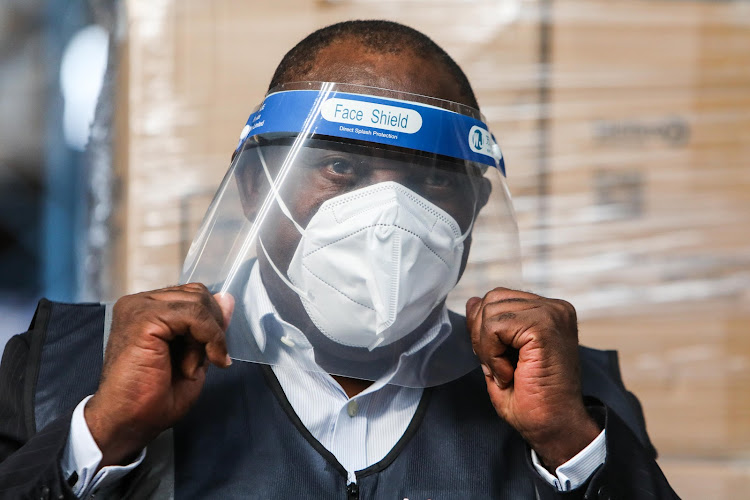 Man behind the mask How did Cyril Ramaphosa go from the man who held such great promise to someone history will judge as a huge disappointment?
Image: Alaister Russell/The Sunday Times

My critical remarks about President Cyril Ramaphosa over the past year or so, but especially since the advent of the Covid-19 pandemic, have made me the target of many. Yes, you fool, you were a Cyril groupie; we told you he was Zuma Lite; you can’t separate a leader from his rotten party.

Well, okay then, I’ll take it on the chin. I have never been a groupie of any politician, but I have written many positive things about Ramaphosa, especially just after his election as ANC president in December 2017, and I have gone out of my way to try and explain what some people viewed as his “spinelessness”.

I first met Ramaphosa as a young reporter on the Financial Mail in the early 1980s when he was a firebrand trade unionist. I experienced him as a decent human being and a brilliant political strategist with a very sharp mind. He demonstrated that during the negotiations between 1990 and 1994.

But after he left active politics in 1996 and became a business person, I had virtually no contact with him. My last conversation with him was at a commemoration service for Frederik van Zyl Slabbert in 2010. Over the past 10 years we occasionally greeted each other at public events and inquired after each other’s health.

I badly wanted him to succeed in leading us out of the Zuma desert. The Cyril I thought I knew had it in him to do that, I believed. Besides, there was no one in the ANC with even a modicum of his talents and qualities as a leader.

I have a fairly good understanding of the inner workings and the factional politics of the ANC. I knew it would not be possible to quickly dismantle the patronage empire that had been established during the Zuma years. I realised that with Ace Magashule as secretary-general of the ANC Ramaphosa would have to tread very softly to avoid triggering a palace revolution that would threaten his presidency.

I badly wanted him to succeed in leading us out of the Zuma desert.

After his first year as president I started getting impatient with the lack of real change, and occasionally voiced this frustration. On every occasion, people from his inner circle, including ministers and former ministers, advised me to hold my horses, to appreciate that Cyril was a man for social compacts, consultation and consensus rather than political theatre. The president is going as fast as circumstances allow him, they told me, and the result will be visible soon.

I gave the president a lot of credit for that which he had achieved: a new, clean prosecutions authority and Hawks, new SOE boards, and the axing of some of the worst Zuma-appointed cabinet ministers. And, of course, the fact that we again had a president who wouldn’t be an embarrassment on the international stage.

But, I’m afraid, the tide has turned for Cyril Ramaphosa. A New Dawn deferred is a New Dawn denied, to paraphrase Langston Hughes.

With his first, even his second, television address on the pandemic I thought (and wrote): the crisis could bring out the best in Ramaphosa; the gravity and urgency of the situation would give him the room to escape from the confines of an ANC collective and to put his vision into effect.

It didn’t work out that way. His empathetic, sincere words on television broadcasts to the nation are simply not enough.

The ANC is as untransformed, corrupt and ideologically decrepit as before.

The ANC is as untransformed, corrupt and ideologically decrepit as before.

Ramaphosa was silent when some of his senior cabinet members abused the Covid-19 pandemic to play power games rather than move mountains to prepare for the peak of infections we’re experiencing now. In the process they demonstrated how out of touch they were with the people, especially the poorer people in townships and informal settlements, and with the economic realities.

Who would have thought 25 years ago that an ANC government would have to be forced by courts of law to allow citizens to feed the hungry when the state was failing to do so, and to reinstate school feeding schemes?

Ramaphosa’s government preferred to treat South Africans as subjects rather than citizens in partnership to fight the pandemic. They don’t need to know why we’re doing what we’re doing, they don’t deserve to be told about the science we’re following (or not following), they just need to do as we say. To question us is unpatriotic (or racist).

My explanations of why President Ramaphosa was reluctant to act decisively and why he is so allergic to confrontation do not hold water any longer.

Ramaphosa, it seems, has squandered the opportunity to, in his own words, use the pandemic to start with a clean slate and reimagine a new society.

How did he go from the man that held such great promise to someone history would judge as a huge disappointment?

My explanations of why president Ramaphosa was reluctant to act decisively and why he is so allergic to confrontation do not hold water any longer.

The strategic consultant Dirk de Vos said something on Twitter last week that I thought merited contemplation: “Cyril Ramaphosa would have been a reasonably good president had he not detoured into the position via being a BEE billionaire. It has rendered him clueless about how the world actually works and without any courage to make the hard decisions that need to be made.”

Ramaphosa would probably have been a brilliant president if he had become president in 1999 or even 2004.

But I’m afraid I’m beginning to think that the wasteland he inherited after the Zuma tsunami and then the crisis of a vicious pandemic were a mountain just too high for him to climb.

The argument by some of his apologists and lobbyists that there are really two ANCs and that he is the face of the decent one caught up in mortal combat with the evil one, is getting thinner by the day.

Nothing would make me happier than if he would prove me wrong in the weeks and months ahead.

But I’m done with holding my breath.

• Max du Preez is the publisher of vryeweekblad.com

Oh, the in-humanities! Zille pops a shot at ...

I’m all out of Ramaphositivity. Now I’m just not that into him