Julius, the cap doesn’t fit, so why are you wearing it?

Julius, the cap doesn’t fit, so why are you wearing it?

The anti-capitalists have an online shop. One hopes the merch will be sold at cost and wasn’t made in China 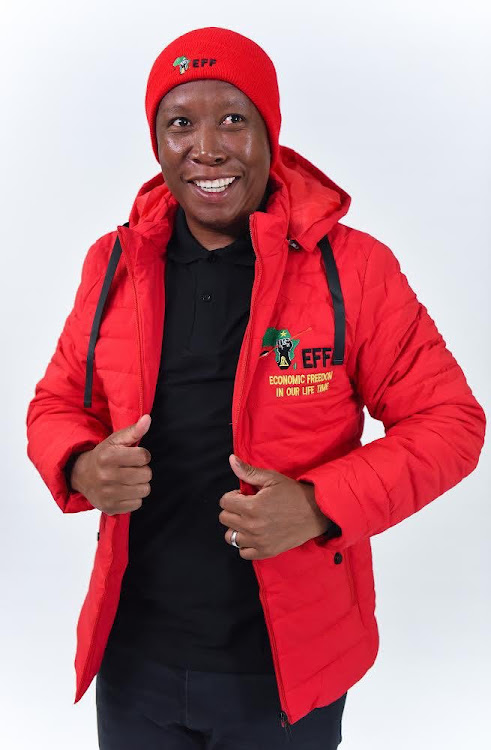 The EFF has launched an online shop selling red golf shirts and now nothing means anything any more.

Indeed, to land on the website’s front page, where Julius Malema and Floyd Shivambu proudly model a selection of cosy red puffer jackets and beanies, is to swan-dive straight into the surreal.

“EFF merchendise [sic] for Winter is sure to delight the most style [sic],” insists a scrolling banner, suggesting that somebody had a choice between economic freedom and hiring a copy editor and went with the former.

A smattering of typos, however, is the least of your worries when you gaze in morbid fascination at the site’s front page. No, what tips it over into pure surrealism is the spectacle of self-proclaimed revolutionaries, who endlessly denounce capitalism and talk about abolishing private property, posing like GAP models as they try to flog party regalia for a few bucks.

“Regalia” isn’t my word, by the way: that’s what the EFF called its merch when it launched the shop this week. Linguists and historians might find it an odd choice. Regalia, after all, refers to the emblems, insignia, trinkets and shiny what-whats of royalty, especially at coronations: revolutionary regalia is a contradiction in terms, like Louis XVI wearing a Che beret.

Then again, perhaps it’s entirely appropriate for the EFF, which, despite its endless claims to being a revolutionary party, is, in fact, a monarchy, built around the ideas, moods and desires of an unchallengeable, infallible king.

Yes, “regalia” does make a certain sense. But many other questions remain.

For starters, we know that capitalism is anathema to the EFF. So how, exactly, does this shop work?

Malema is right: he really does run the show

His critics often insult his intelligence, but he has again proved he is supremely gifted in the political dark arts
Ideas
2 years ago

Since profit is a form of exploitation, are those downy jackets and golf shirts being sold for exactly the amount they cost to make?

If I order a revolutionary profit-free beanie, I’m obviously not going to have to pay for it to be delivered to my home, but will the courier expect some form of barter when they arrive? Do they accept, say, potatoes? Or can I simply write them an IOU for 50 potatoes, deliverable if the EFF comes to power and we all embrace a potato-based economy?

Then there is the question of where these goodies are made. It is inconceivable that they were manufactured in China, since this would mean jobs were taken away from South Africans and were given to Chinese industrialists whose factories are financed by the debt of Yankee imperialists.

The online shop, however, doesn’t provide any details. Which means if I want to learn more, I’ll have to order something, pay the EFF an amount which they will presumably pay directly to the manufacturer without going via a bank which might extract fees, and then wait for delivery as I write my potato IOU.

So what will I choose?

Will it be the beanie, made of the wool of sheep clearly owned by nobody and shorn pro bono by Shepherding Commissars?

Will it be the golf shirt, its militant red hue signifying that I’m not a hypocrite for playing golf, but am instead part of the vanguard of the revolution that will almost definitely storm the barricades after I’ve got out of this sand trap?

Or will it be those puffy jackets, “sure to delight the most style”?

Yes, I think the last one. Because I am the most style and I want to be delighted.

Right. “I hereby promise to pay the bearer the amount of 50 potatoes ... ”

Hallelujah! In the ANC church, this is a time of ...

SA is already primed for an apocalypse. We didn’t ...

Is there a plot to kill our god-king Mogoeng? His ...

The ANC has never felt embarrassed before, so why ...

ANC won’t get its sticky mitts on the restaurant ...