A WORD IN THE HAND: GRAUPEL 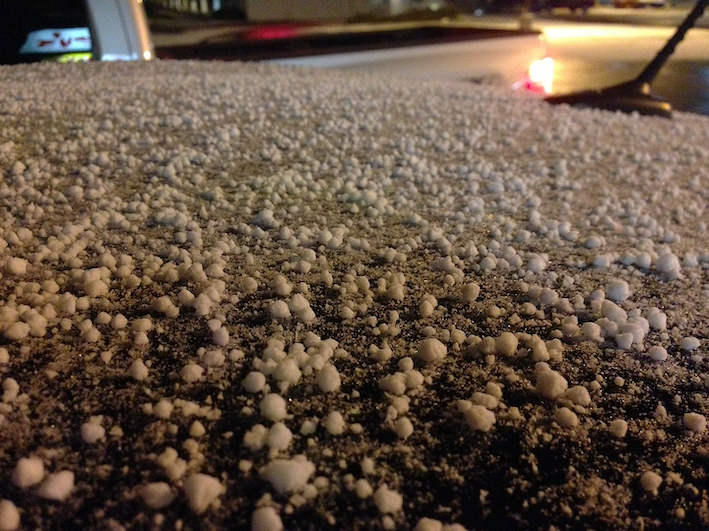 Don't ask the spellchecker It's neither snow nor hail nor rain nor sleet.
Image: Wikimedia Commons

As if we didn’t have enough to deal with in these strange, trying and disturbing times, even the weather has gone all extreme on us.

“Extreme” comes from the Latin extremus, meaning that which is as far away from exterus, the exterior, as you can possibly get. In other words, something extreme is very extremely far away from everyday indoors normality. (Never say “very extremely”, by the way, it is tautology, but in this case it feels warranted.)

The coronavirus situation is undoubtedly an extreme situation, and if you ask me it seems unfair of the weather to so enthusiastically join in and make extreme sport of us humans.

The opposite of extreme is moderate. There has been very little we can call moderate lately, unless it is our consumption of alcohol during those weeks of prohibition (which most of us have thankfully now forgotten with the aid of an enthusiastic resumption of consumption).

Getting back to the weather, my Canadian friend and kindred spirit Erin sent me a strange message a few days ago: “SUE” she asked – in capital letters, which alerted me to the fact that this was a pressing matter and not just another instalment in our sharing of international squirrel antics – “SUE: Are you familiar with the word ‘graupel’?”

I had not heard or read this word before. You could say I was nonplussed.

Incidentally, “nonplussed”, the word we sometimes use when we are perplexed, puzzled and confounded, comes from the Latin phrase non plus, which the Online Etymology Dictionary helpfully informs us means “no more” or “no further”. In French this simply means you’ve had enough pain au chocolat and boeuf bourguignon and no thank you I won’t have even a wafer-thin mint. In English, being nonplussed is as extremely far away as you can get from being plussed, which should mean “in the know” but actually doesn’t mean anything.

These are the extreme vagaries of language we have to contend with while trying to survive both a viral pandemic and the weather. You’d almost think someone had it in for us.

Getting back to graupel. Erin sent me two notices that had been posted on Twitter by the SA Weather Service. Both mentioned this strange word.

“Chance of sleet and graupel in Gauteng,” said one, followed by a bullet point in the shape of a snowflake (cute) that explained graupel as: “soft particles of snow with fragile crust of ice; or soft hail.”

It sounds like an adolescent giant dreamed up by JK Rowling, or a cunning way to tie a knot, or a particularly stubborn pimple that won’t pop no matter how hard you squeeze it.

My spellchecker does not recognise the word “graupel”. It automatically changes it to “grapple” but thankfully Robin the heroic righter of wrongs will have grappled every graupel into submission before you read this.

My Canadian friend, being Canadian, was irked that she, a Canadian with an inherited and experienced handle on all terms for snow and ice, had not heard this word.

I, as a person who likes to think she knows words, was no less outraged.

Graupel? What is this graupel? It sounds like an adolescent giant dreamed up by JK Rowling, or a cunning way to tie a knot, or a particularly stubborn pimple that won’t pop no matter how hard you squeeze it.

As it turns out, graupel is an actual word, even though most dictionaries don’t include it and my spellchecker tosses it carelessly out of the ring like a midget in a leopard-print  loincloth.

According to the egalitarian Merriam-Webster website, graupel is a word of Germanic origin which originally meant a very small piece of pearl barley. Some say it sprang from the Slavic word krupa, meaning a very small piece of pearl barley. Etymologists have not swallowed this theory whole, but in the absence of any definitive research it would appear that graupel has been around since 1889, when it was first used in a weather report to describe a semi-solid type of precipitation that was neither snow nor hail nor rain nor sleet, but some sort of meteorological hybrid of all the aforementioned.

If you were a meteorologist on whatever passed for television in 1889 and had to instantly come up with a word to describe something that was neither rain nor hail nor snow nor sleet, you’d probably um and er and clear your throat and say something like “graupel”.

I can’t prove it, but this is my theory of how graupel was born, and I’m sticking to it.

What is even more mystifying than the etymological origin of graupel is why it suddenly became popular in weather reports in SA this week. Perhaps a researcher was sifting through the  weather-report archives at the SABC (those that didn’t disappear into the Hlaudi of Unknowing), looking for a suitably extreme word to describe our current strange and disturbing weather conditions, and came across “graupel”.

“Never heard of it!” s/he might have exclaimed delightedly. “It’s perfect!”

Now we grapple with graupel in almost every province. To add even more ice to the mix, when it lies deep and thick – although perhaps not entirely even, given its unstable nature – graupel seems to look exactly like snow. Yesterday the Vryheid Herald reported the first fall of graupel in the area since 1996, quoting a farmer who said: “It was white as snow this morning.” So there you have it.

The totally dingis-dumping case for boring, ...

Spirit of Anne with an ‘e’ lives in paperless ...