The clumsiness that causes minister, MEC and principal to be out of synch on reopening, is devastating for children 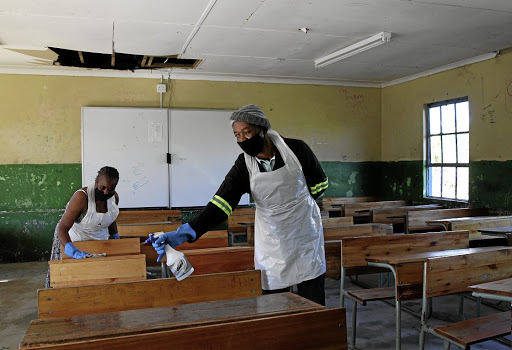 Filling in Parents Tholiwe Hlophe, left, and Skhumbuzo Mchunu disinfect a classroom at Sobonakhona Secondary School in Umbumbulu. The minister and her department simply do not have the fiscal capacity and managerial competence to deliver resources to every school.
Image: Sandile Ndlovu

On one single day this week the minister of basic education declared that schools would only reopen on June 8; the provincial MEC for education where I live insisted on the original, gazetted date of June 1 for the reopening; and my niece received a letter from her school in the same province telling parents that “the SMT and SGB feel it is best that learners not attend tomorrow”. All of this on the Sunday before schools were scheduled to reopen after an extended lockdown.

The minister’s news conference on the Sunday that would have clarified matters was suddenly postponed to the next day, the Monday the schools were supposed to reopen. Parents panicked and I was inundated with calls. What is going on?

What you just witnessed was a devastating display of incompetence or what the political scientist Adam Habib calls political mismanagement of the crisis sparked by coronavirus. Indeed, the virus not only exposed inequality; it revealed what we already knew – the staggering degree of political ineptitude within the state.

We had long ago become desensitised to the incompetence of political leaders, such as the mismanagement of state-owned enterprises that felled the national airline costing the livelihood of thousands of hapless employees. We tolerate all of this until our health and lives are threatened, as in the critical decision of when to reopen schools. There, in full view of an anxious public and under the glare of the television lights, we witnessed a flailing, hapless leadership that could not even get a minister, an MEC and a principal to deliver the same message about the reopening date for schools.

Across this country tens of thousands of parents have lost complete faith in our government’s ability to manage the education crisis during this pandemic. You see, when a working-class, single mother like my niece panics on a Sunday night it is because the effects of such indecision are devastating. She has to know, within a few hours, whether to go to work to earn the little money she needs to pay the school fees and feed the family. If she does go to work, on the other hand, she must make plans to drop her child off at the school gates and secure after-school arrangements.

The former white public and private schools are fully prepared for the return of teachers, children and workers. The majority of black schools are not.

Then of course there are the effects of this uncertainty on the children themselves. I have just read most of the more than 560 stories about “learning under lockdown” from children in schools from all the nine provinces. Rich schools and poor, urban and rural, public and private, large and small. I must confess that I was deeply moved by many of those stories. They tell of widespread trauma expressed in emotions such as fear, anxiety, helplessness, anger, sadness and even suicidal thoughts.

What struck me in particular was the impact of the decision to extend the lockdown on the children. The one moment they were looking forward to reuniting with friends and resuming classes only to find their hopes dashed by a longer lockdown. This is what I wish the minister, the MEC and the principal understood – when you keep changing the dates of return, when you casually postpone your news conferences, and when you cannot even agree among yourselves on when to open, you have no idea how devastating that clumsiness is on the emotional lives of children.

Of course, one understands the pressure on the political heads of education. The unions, wisely in my view, do not want their teachers returning to schools when personal protective equipment (PPE) and all the other conditions for reopening are not in place. Well, they are going to wait for a very long time because the minister and her department simply do not have the fiscal capacity and managerial competence to deliver those resources to every school.

There is, however, a much more intriguing problem that the political heads are grappling with. That is, the former white public and private schools are fully prepared for the return of teachers, children and workers. The majority of black schools are not.

In a world without a divisive history and politics of race, it would make logical sense to simply let those schools who are ready to return to teaching and learning. In SA, however, such a decision would simply draw attention to the racial fault lines that still separate former white and black schools.

In whatever this drama concludes, one thing that cannot be altered is this: the inequality in learning outcomes that already existed before the pandemic will be exacerbated because of the lockdown regardless of when schools reopen.