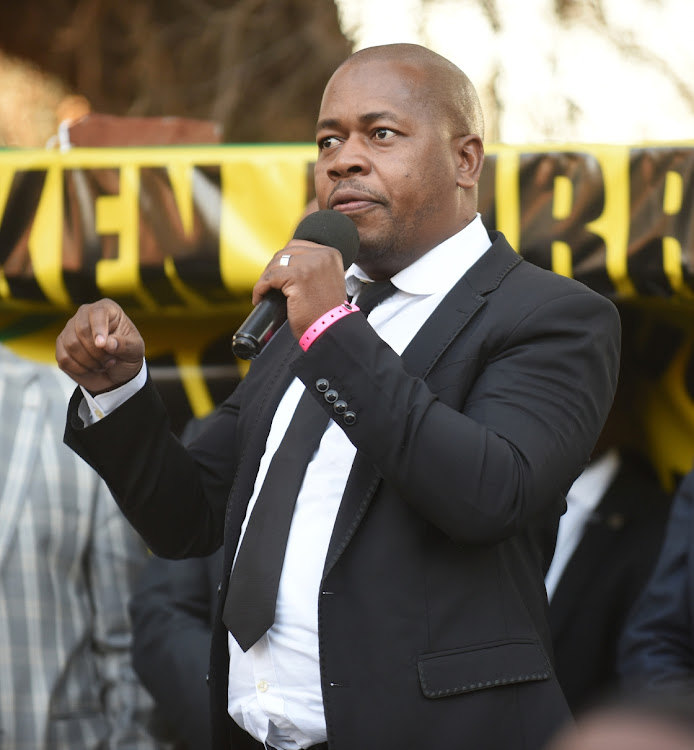 On-off fart-catcher Ekurhuleni mayor Mzwandile Masina huffed off Twitter on Monday after berating the ANC, much to Julius Malema's delight. But it didn't take long for him to jump back onto his social media soapbox.
Image: Freddy Mavunda

To describe the mayor of Ekurhuleni, Mzwandile Masina, as a sideshow would be unfair. Sideshows at circuses or craft markets sometimes feature talent or, at very least, adequacy. So perhaps it’s best to say that Masina is simply a politician clinging to the frayed, gravy-stained skirts of the ANC and having a somewhat rough week.

Not that it’s been plain sailing the rest of the time. In 2017 he distinguished himself by pinning his colours so firmly to the sinking Jacob Zuma mast that he promised to resign as mayor if Cyril Ramaphosa was elected president. When he didn’t he was accused of rank hypocrisy, but perhaps as a staunch advocate of radical economic transformation (RET), Masina realised that resigning would force a radical economic transformation of his own.

Yes, it must have been tough to be a Zuma fart-catcher in a Ramaphosa-led country, especially now that we all understand, in depressing detail, that “RET” actually means “rapidly emptying treasury”.

But things got even more desperate for Masina three weeks ago, when his former comrades turned on him. A certain Nkosentsha Shezi, speaking on behalf of the “champions of RET”, declared that Masina “has built his political career masquerading as an unapologetic cadre who believed in radical economic transformation, but we say no, not that way, Mzwandile! We should never backstab our comrades for our own comfort and promotion.”

Having broken the first rule of RET Club — work towards the total collapse the national economy for your own personal gain, but don’t piss off your fellow saboteurs — Masina was clearly on the out and needed a big gesture to restore some of his tarnished revolutionary sparkle.

Five, four, three, bam! Suddenly the virus fight is up to each of us

With stage 3, Covid-19’s existence in SA has been splintered into 58 million personal experiences
Ideas
1 year ago

On Friday, the Daily Dispatch quoted Malema urging his followers not to expose themselves to Covid-19 by returning to work and “protecting a white economy”.

“If the white economy collapses, let it collapse,” said a man who has never had a job outside politics.

For Masina, it was faux-radical manna from political heaven. On Sunday, he tweeted a picture of the newspaper article, his favourite Malema quotes carefully highlighted, with the endorsement: “I fully agree with my friend on this one @Julius_S_Malema. Until we nationalise all commanding heights of the economy — we need to restart this economy and make sure it favors the majority. Things can’t be sane again.”

I have a suspicion that Masina meant to write “Things can’t be same again”, but his version seems more in character. Because what followed was a Twitter meltdown for the ages.

Daring the ANC to remove him as mayor, he announced: “I am not a coward. Im ready @MyANC I won’t ask you why. What I won’t do is to be friends of [White Monopoly Capital]. My views are more important than being gag by whites. I’m not a coward. Kill me if you can, I fear no one.”

Having rushed into the last resort of mediocre political scoundrels — the idea that they are important and radical enough to be on someone’s hit list — it was time for a dramatic exit and, on Monday evening, as the ANC released a press statement cautioning members about flapping their mouths on social media, Masina’s Twitter account was deactivated.

Malema was beside himself with glee, tweeting: “They suspended the Twitter Acc of @mzwandileMasina because they can’t tolerate the radical views of the black man. I know you belong to them Zwai but never trust these @MYANC people, young independent thinkers have always threatened them. Never be discouraged black child.”

It’s where our, er, leaders come up with their ‘collective’ decisions that are based on, er, ‘science’ and, er, ‘logic’
Ideas
1 year ago

It was stirring stuff, if it had been true. But of course, the problem with storming off Twitter in a huff is that you lose your soapbox. And so, just hours after having left in a cloud of heroic brinkmanship, Masina was back on Twitter.

It’s possible that he will be disciplined. It’s possible he’ll be fired as mayor or urged to deliver on his 2017 promise to resign.

The question most punch-drunk South Africans will be asking, however, isn’t about Masina’s career, but his beliefs.

It is, simply, how a senior member of the ruling party and a former deputy minister of trade and industry can believe that what SA’s poor really need is the total collapse of any part of the national economy, let alone the part that, by his own reasoning, is the wealthiest and, therefore, in the best health.

South Africans would be forgiven for being alarmed. This kind of thinking is straight out of Pol Pot’s Day Zero plan for national economic suicide.

But we should be consoled and calmed by one important fact: we are governed by hedonists who have never, ever, done what they’ve promised.

Nobody in power, or even close to power, wants to give up their creature comforts to build an agrarian utopia based on the exchange of potatoes.

All of this is simply a performance; the theatre of fake radicalism; an endless dog-and-pony show designed to squeeze out a few more years of living on taxpayers’ charity and to postpone that dreadful day when they’ll have to go and find a job in the economy they endlessly dream of destroying.

Calling Cape malcontents - this way to a utopia ...