How to use a divine allegator skin against an unconvicted orchid ...

A WORD IN THE HAND: ALLEGED 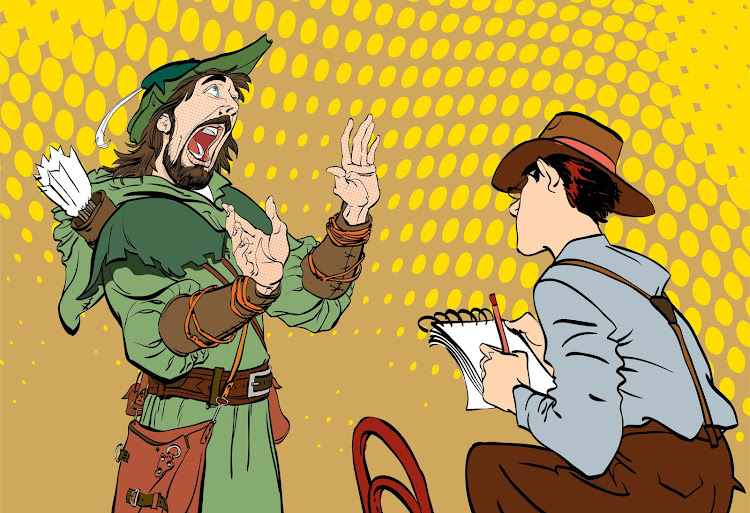 Fine lines You may not call a person a thief, but if a legal case of theft has been brought against him, you may say that he is an 'alleged thief'.
Image: 123RF

Should any aggrieved orchid lover be in a litigious mood, they might sue you for maliciously soiling the reputation of the orchid, then try to claim damages for the emotional pain and suffering caused to sensitive orchid cultivators.

Journalists need crocodile armour to deal with such occasions, which are inevitable and unavoidable. No matter how carefully you tiptoe through the tulips, you are always going to tread on the toes of a green-fingered gnome or two.

It is unlikely that the orchid-adoring horticulturist will win a court battle in which a journalist is accused of discrimination for saying that the orchid is an ostentatious excuse for a plant. In other situations, however, writers need to think carefully about voicing such judgemental opinions.

Which brings us to libel. In the 1300s, libel was an innocent word that referred to any formal statement put in writing. Even a recipe could be called a libel.

By the 1630s, however, libel had grown grumpy and jaded (three centuries of faulty plumbing will do that to a word) and it began to hang out with unsavoury friends like defamation, calumny and character assassination.

Today, libel refers to written statements – including those sent via e-mail or text message as well as those published in newspapers – that are likely to harm a person’s reputation (libel’s sister slander is spoken as opposed to written).

Some might assume that the statement labelled libellous must be a lie, but the truth is that a statement doesn’t necessarily have to be false to be libellous. It just has to be unproven.

Fear of libel can make it difficult for a journalist to tell the truth. You might see a person grab a potted orchid from someone else’s windowsill and run off with it. Thousands might see the same thing and agree with your view of events. The video of The Orchid Thief might go viral on Twitter and YouTube – it might even be adapted into an Oscar-winning film – but you still can’t call the orchid-snatcher a dirty dishonest rascal in print, at least not until he or she has been convicted in court.

Farmer Brown, who was watching over the hedge, alleged that Jack fell down the hill after Jack’s back vigorously connected with Jill’s hands.

This is where the word “alleged” descends like a deus ex machina to save the fourth estate from imprisonment. You may not call a person a thief, but if a legal case of theft has been brought against him, you may say that he is an “alleged thief”.

Alleged is the ally of the cautious journalist, but like many other words it is abused and overused.

Every newspaper has its own style guide. In ours at the Sunday Times, the entry for “allege” says: “Use with care. Specify the source of any allegation.”

An acceptable statement would be something like this: “Farmer Brown, who was watching over the hedge, alleged that Jack fell down the hill after Jack’s back vigorously connected with Jill’s hands.”

It is unfortunately far more common for reporters to take shortcuts and shove in an “allegedly” without giving the alleger’s details.

Strictly speaking, the only proper use of “alleged” is when the allegation exists on a criminal charge sheet. But, just like “scientific studies have shown”, alleged and allegedly are too often used without credible back-up to give the writer an escape clause when dishing the dirt on someone.

This brings us to Robert Hartwell Fiske, a word-loving crusader who published The Vocabula Review – an online journal dedicated to the caressing of correct English and the stamping-out of careless English – until his death in 2016.

Fiske’s website included a section called “Worst Words”, where fellow pedants posted their pet peeves. At the time of his death, number nine on an exceedingly long list of most-hated words was “allegedly”.

OK. If I were one of those “studies have allegedly shown” journalists, I would leave that statement as it stands. I am not, so in the interests of full disclosure I have to add that “allegedly” was number nine on the list not because it was the ninth-most annoying word but because the list was alphabetical.

Still, it was there, defined as “a sloppy word misused by lazy journalists under the false belief it frees them from libel”.

The primary function of “alleged” is to protect the rights of the presumed-innocent but, as noted by others besides Fiske, alleged has become a semi-protective cloak (like a face mask with breathing holes cut in it) for the journalist. Writing “this has been asserted although not yet proven” might be clumsy, but “allegedly” does not hold up under ethical scrutiny.

It can also sound ridiculous. In a column for Noozhawk.com, Harris Sherline published a collection of headlines that used “allegedly”. My favourite was: “Army Private Arrested After C4 Allegedly Found In Luggage.”

No journalist wants to risk a libel suit, of course, but I’d allege that the crocodile skin allegedly protecting us from the arrows of offended orchid growers is starting to wear a bit thin.

Which reminds me: one who makes an allegation is known as an alleger. The alternative form of this word, used in the 1680s, was “allegator”. I can’t think why it didn’t catch on.

Between a curt mash-up and dainty butt-woman, ...

Defy irate monks, but not to form an elite order ...

In grim times it falls to itinerant oddities to ...

Even rump sellers contract the poisonous fever of ...

Witch ever way you spell it, just don’t stick it ...

The explosive classic between an excellent read ...

Faith in lockdown flies out the window when churches reopen