It’s hysterical bull, but the pox of anti-vaxxer idiocy persists

A WORD IN THE HAND: VACCINE

It’s hysterical bull, but the pox of anti-vaxxer idiocy persists 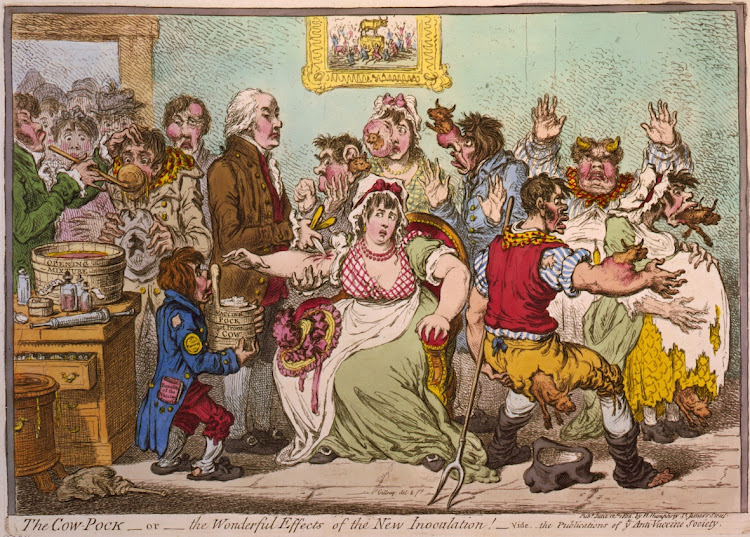 “Vaccine” is not a word ​on everyone’s lips in these troubled, trying and disturbing times. Most of us are too scared to even mention this hoped-for salvation from physical illness and financial ruin, just in case it doesn’t come true.

Vaccines have not always – in fact, hardly ever – been looked forward to with such hope and reverence.

The word “vaccine” entered common English usage in the years following 1796, when English physician Edward Jenner published his notes on the success he’d achieved by injecting people with a relatively harmless strain of cowpox to prevent them contracting smallpox, a virus of similar organic structure that was deadly to humans.

The Latin-derived word “vaccine” simply means “pertaining to cows”. As is the way with words, it quickly shed its milk teeth and became a subject of fiery-horned debate.

Smallpox remains the only human disease to have been successfully eradicated from the world, thanks to vaccinations. In the 1800s, however,  it was no easy task to convince people to save their own and their children’s lives.

Those who today illogically refute the wealth of irrefutable evidence of the life-saving power of vaccinations are not recent arrivals on Earth via spacecraft from Planet Mad.

Newsweek’s Eve Watling tracked the origins of the crazy anti-vaxxer movement in an article published in 2019.

She writes: “One of the earliest bits of anti-vaxxer propaganda also appeared around 1800 – a French cartoon of two men wielding a giant syringe and pulling a monster behind them, as a group of children run in terror. In 1802, the English engraving The Cow-Pock-or-the Wonderful Effects of the New Inoculation showed newly vaccinated people sprouting cow heads from fresh injection sites, a reference to the pus taken from cowpox-ridden bovines that was used in smallpox vaccines at the time.”

In our own time, this mad cow disease has infected respected celebrities (respecrities?) from Robert DeNiro to Oprah Winfrey.

Watling continues in the same vein: “Another English doctor, Benjamin Moseley, emerged as a prominent early anti-vaxxer … In an 1806 essay, he claimed mixing cow matter into humans was a violation of natural law. He described fictional post-vaccination ailments like ‘cowpox face’ and speculated that British women ‘might wander in the fields to receive the embraces of the bull’.”

In our own time, this mad cow disease has infected respected celebrities (respecrities?) from Robert DeNiro to Oprah Winfrey. Most of their objections to the sensible practice of vaccination were initially based on the unfounded protestations of a lunatic called Andrew Wakefield.

In a 2017 report for Global Citizen, researcher Gabriella Canal gave a succinct summary of the resurgence of anti-vaxxer hysteria:

“It wasn’t until 1998 that this pseudoscience found a credentialled spokesman in Andrew Wakefield, a British former gastroenterologist and medical researcher. That year, he published a case series in the Lancet medical journal that suggested that the measles, mumps, and rubella (MMR) vaccines may ‘predispose to behavioural regression and pervasive development disorder in children’.

“The paper was received with heavy publicity and MMR vaccination rates began to drop as concern grew over the link between autism and the vaccine.

“A few months after the publication, Britain’s General Medical Council revoked Wakefield’s medical license. But it was too late – misinformation had spread like wildfire and with the growing adoption of the internet, the movement began to enter the mainstream.

“In response, the American Academy of Pediatrics first produced a 21-page document in 1999 listing all of the studies that clearly show there is no link between vaccines and autism.”

Still the anti-vaxxer protests continue. And still children die of easily preventable diseases. If history shows us anything, it is that people will believe whatever they want to believe, regardless of all available rational evidence of their idiocy.

We can only hope that the Covid-19 vaccine, when it finally comes our way, is not treated with the same bovine incredulity.

Not much call for the voice – but will screens ...

How a wannabe fact took a ghastly spin

Humans love to give flight to their fight over ...

It’s as silly as kipper’s knickers, but not as ...

Moonshine moniker is too tame for scoffing ‘Trump ...

Epic! A kid to take a tern for the worse

Little Emma’s purged, but you can’t deter a ...