Cyril, SA is collapsing and you look weak. We need you to speak ...

Cyril, SA is collapsing and you look weak. We need you to speak to us

The state response to the virus was impressive, but all that’s been undone. SA needs visible, ethical leadership 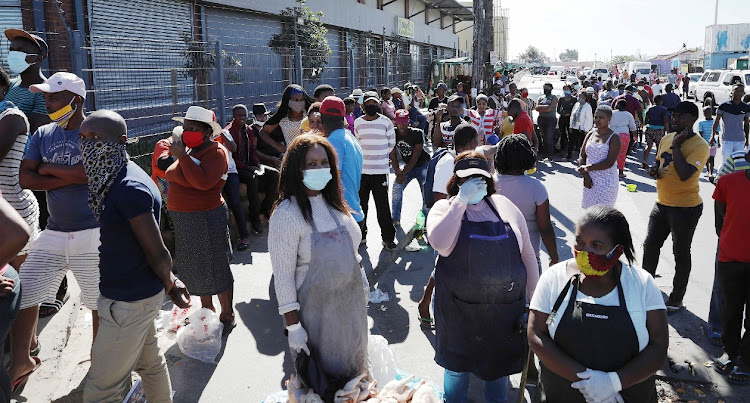 Critical mass People queue outside a supermarket in Khayelitsha, Cape Town. In the past two weeks the number of confirmed Covid-19 cases in the township has risen by 638%.
Image: Esa Alexander

It is time for President Cyril Ramaphosa to speak directly to the nation again.

With nearly 50 days gone since the national lockdown started, we are a nation that is at each others’ throats. The energy is negative. The shambolic move from Level 5 to Level 4 is adding to the simmering anger. Ministers are wagging their fingers at the populace as if we are children. Citizens are threatening to “do something”. Hunger stalks the land.

Handled badly, times of crisis like this can destroy nations. Handled well, they can serve as a rallying point to build something positive out of the ashes. It is how we act now, in the middle of this crisis, that will determine which way we go. Point-scoring, finger-wagging and threats will help no one.

Visible, ethical leadership is what the country needs now. Since news of the coronavirus emerged in January our government has acted with speed and an impeccable sense of responsibility. Ramaphosa was humbly yet firmly in charge. Health minister Zweli Mkhize was a voice of reason and calm as the virus spread among our people.

All that positive work and energy has dissipated in the past two weeks.

It is time for Ramaphosa to speak to the nation again. On Monday he will issue his letter, as he does every week. One or other minister will give a press conference explaining one or two things around the regulations or the continued spread of the virus. That’s fine. That’s not what SA needs, though. The country needs concrete information on key areas and it needs decisive leadership on the economy. Jobs are being lost. Money is running out. The country needs to know what the chief executive officer of the country, Ramaphosa, is doing about all this.

In the public eye, Ramaphosa is limping. The fiasco of his announcement that cigarettes would be sold under Level 4 lockdown, and the next week a minister announcing otherwise, paints him as weak no matter what the explanation. He needs to speak.

Not many of Ramaphosa’s ministers are good communicators. Trade and industry minister Ebrahim Patel’s messaging on online shopping (and his dismissal of economic projections on unemployment as “thumbsucks”) has been abysmal. Every time he speaks he comes across as an overzealous bureaucrat with a red pen wanting to ban everything rather than someone who should be doing absolutely everything in his power to restart safe trading in the country.

Right now, without government leadership on what models it is following, every Mbali, Sipho and Johannes is an epidemiologist.

Dr Nkosazana Dlamini-Zuma has a reputation for being one of the most hardworking and dedicated ministers in the Thabo Mbeki administration and afterwards. Yet she is a poor communicator. None of her speeches project her as someone who wants to take the nation with her on her journey.

Mkhize started off well as the face of the fight against the pandemic and he has continued to do well. Calm, knowledgeable and hardworking, he has warmed himself to the nation. Yet, as the figures tumble out and the bodies pile up every day, it is time for him to do what he achieved when he brought out his scientific advisers four weeks ago: give clarity on what all these numbers are about and where they are taking us. Right now, without government leadership on what models it is following, every Mbali, Sipho and Johannes is an epidemiologist.

The point of the lockdown was to buy us time to build hospitals, acquire equipment, recruit staff, get appropriate medicine and be prepared for the peak of infections and hospital admissions. Are we there yet on these preparations? What is the point, the goal, of the continued lockdown at the high level that it is? The minister can explain all this. He should. South Africans are not stupid. If it makes sense they will follow their leaders’ directives.

The same talking points should be followed by Ramaphosa. He is the captain of this ship. He has the bigger picture. He knows that economically we were a sinking ship (ratings agencies had downgraded us, unemployment was tracking up and the economy was tanking) before Covid-19 hit. He needs to, in the same calm and empathetic manner of his first few addresses in March and April, tell us what the plan is now.

The president needs to talk to his people. He needs to nip the negativity and disgruntlement in the bud. He needs to rally his cabinet behind him and behind explainable and sensible solutions. The alternative is that we wallow in this negativity, that we throw insults at each other, and that we emerge from Covid-19 even more divided and directionless than we were in the past.

We cannot afford that. The country will sink if we enter the post-Covid period with the same divisions and attitudes as the ones we carried before we got here.

SA is in deep trouble, so the state’s nonsense ...

Covid-19 reminds us we have failed in our mission ...

SA could easily feed its poor. Instead we have a ...

Whatever horror Covid-19 brings, this is the hour ...