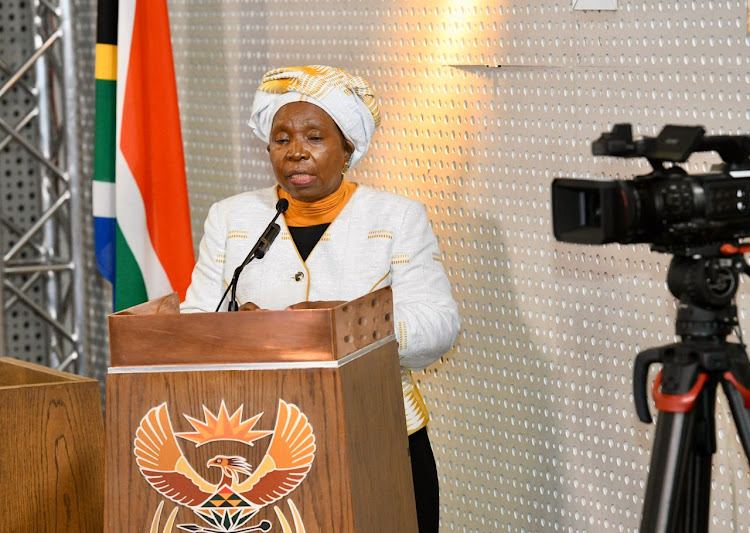 IN A HAZE Cogta minister Nkosazana Dlamini-Zuma has defended the government's decision to not allow the sale of cigarettes.
Image: GCIS

In my local shopping centre, five employees stood in a tight huddle around a sixth who was taping something to the floor. None wore a mask. Their faces, offering smiles and jovial commentary, were kissing-distance apart.

At last the one on the floor got up and revealed her work: a printed circle, carefully stuck down, indicating how far apart shoppers needed to stand when they queued.

It was an almost perfect picture of South Africa’s official and public response to Covid-19, summing up the absurd extremes that cohabit almost everywhere in this country, where some seem stolidly and stoically determined to avoid or delay the spread of the virus while others treat the pandemic like something happening far, far away.

In the suburbs, the duality of our natures is most dramatically on show between six and nine in the morning. Some people, like your correspondent, are misanthropy in motion, suspiciously creeping along the emptiest streets they can find. Others, with panting mouths flung wide open and nary a mask in sight, pound or freewheel along in each other's wakes like athletic blue whales gorging on body-odour-flavoured krill.

It wasn’t upsetting because something new had happened. It was depressing because it felt so old.

In some cases, this laissez-faire attitude makes sense. On my walk yesterday, I passed a family of five Americans, unmasked and braying, striding joyfully out into a world from which, their president has assured them, the virus will disappear like magic.

Others have based their optimism – and growing resistance to the lockdown – on the "Swedish model". To be fair, it is a very exciting theory: increasing evidence suggests that if you want your country to come through the pandemic with a per capita death toll only dramatically higher than your neighbours, all you have to do is make sure that your country is literally Sweden.

Still, as unhelpful as this comparison is, I understand why people are clutching at straws or stepping off into outright denial.

The Level 5 lockdown was touch and go. There was Bheki Cele, barking at us like the sort of mediocre teacher who bullies children to soothe his own inadequacy. There was Ebrahim Patel, apparently unable to open his mouth without jamming a hot chicken foot into it.

And yet, there was a sense that most of the middle class had bought into the lockdown. It wasn’t happy, but it could suck it up because Cyril Ramaphosa seemed to be saying the right things and Dr Zweli Mkhize clearly had a plan.

That resolve, however, came undone in a puff of cigarette smoke last week.

Cig smugglers have to eat, too, you know. So shut up you unpatriotic...

It wasn’t that cigarettes were banned again, although that wouldn’t have helped the nerves of smokers. Instead, it was how it happened: in a lurching, dizzying about-turn, propped up by insultingly dishonest drivel about 2,000 objectors; the whole thing suddenly, depressingly, permeated with the familiar stench of ANC chaos.

It wasn’t upsetting because something new had happened. It was depressing because it felt so old.

It was also supremely self-sabotaging.

Getting us to police ourselves required the state to inflate, and keep inflated, a bubble of hope, goodwill, short-term memory loss (or at least a willingness to suspend one’s worries about the ANC until the curve flattened) and urgency. Ramaphosa helped inflate it, but it was Mkhize – calm, informed, apparently in a position to formulate essential regulations – who kept it intact.

Last week, that bubble burst. It had begun to tremble, as Mkhize inexplicably drifted to the periphery and the likes of Cele, Patel and Dlamini-Zuma took centre stage, but last week, as they decided to blow smoke into it, it finally popped.

In an instant, it became much more difficult to think about flattening the curve and much, much easier to start wondering why 23,000 people have been arrested for breaking lockdown regulations while none have been arrested for state capture. As the smoke swirled around Dlamini-Zuma, it conjured memories of the Virodene minister who kept ARVs away from pregnant mothers and who gave us Sarafina 2, the first major corruption scandal of the post-democratic era.

The bursting of the bubble has even reached Ramaphosa. When he confirmed on Monday that the decision on cigarettes had been a collective one, it was too easy to remember other collective decisions, like the one he and some of his current cabinet took to vote in favour of Jacob Zuma keeping his Nkandla loot.

Perhaps this reaction is petty given the current crisis. But it’s also what happens when you ask people, with good reason, to suspend their lives, and then lie to them or treat them like children: they remember who you are.

And when you next step up to the podium, it won’t matter how true or necessary your words might be, because every one will have an echo; a faint but unmistakable “Heh heh heh …”

Daily briefings from Cyril? No thanks. Let’s keep ...

It’s what Cyil does after the virus that will ...

See? The dirty cadres who hawked all of SA’s oil ...

Calm down, SA! Lockdown laws may be nasty, but ...

It’s as silly as kipper’s knickers, but not as baffling as certain bollocks