This has been a time that has revealed SA at its best and its worst. Now’s to see if we learn the lessons 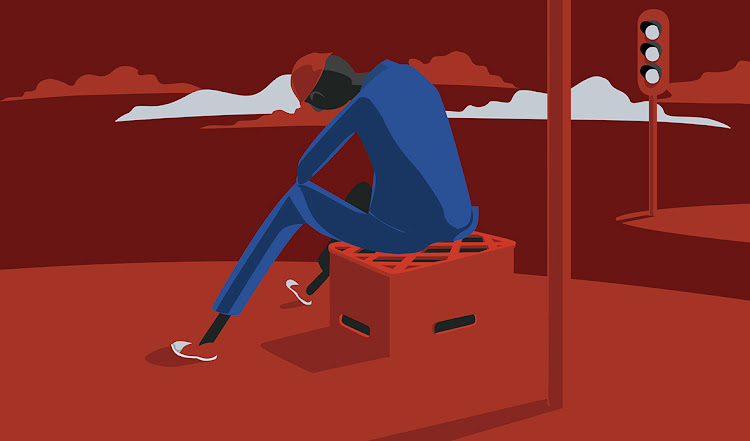 A TIME TO RETHINK When so much has already been revealed, it is clear that our country will never be the same.
Image: Keith Tamkei

Every day this week, Times Select is proud to bring you insightful reflections and moving observations from five of Africa’s finest authors, who like the rest of us are locked down with their own thoughts.

There’s an isiZulu proverb, okungapheli kuyahlola, which, slightly paraphrased, means this too shall pass. It is evoked to rally people in dire straits, whether under the heel of conquerors or – as is happening today – afflicted by some disease.

Covid-19 has laid waste to thousands of lives worldwide and will have a devastating effect on the global economy. At this point when so much has already been revealed, it is clear our country will never be the same. But what is true and inalterable is that, devastating as the epidemic might be, it will one day run its course and give societies a moment to reflect. The plagues of the past also came to an end and left a changed world. However, while the medical and scientific experts look for a vaccine to counter the Covid-19 epidemic, our country should also use the time under lockdown to find lasting cures against the homegrown viruses of racism, greed and violence, an unholy trinity manufactured in the laboratories of the mind.

Inequality, a byproduct of historical plunder, is a reality that faces us every day; it is, however, not a very good idea to expect a hungry person to subsist on a diet of self-righteous indignation.

Commentators hold that the coronavirus outbreak has given us a glimpse into the generous side of our society, starting with the fulsome pledges by billionaires and corporations, down to the modest contributions by men and women who are themselves in need of assistance. Some of the more hard-to-please among us dismiss donations as attempts by the givers to ease their guilty consciences. Why, they ask in social media platforms, was this aid not forthcoming in this sea of hunger? The louder the critic, the more bereft he is of ideas. Inequality, a byproduct of historical plunder, is a reality that faces us every day; it is, however, not a very good idea to expect a hungry person to subsist on a diet of self-righteous indignation.

This coronavirus epidemic has been deemed the great leveller, as it supposedly affects everyone irrespective of race, colour or creed. But in reports from, say, the US, where there are burials in the Bronx, the epidemic deck is heavily stacked against the black and poor communities, which is sometimes one and the same thing. In parts of Latin America such as Ecuador, there are reports of strained mortuaries where bodies are left out on pavements and funeral parlours have run out of coffins, resorting instead to cardboard boxes and packing crates for the burial of the dead. LINED UP Empty coffins for sale outside a funeral parlour amid the outbreak of the coronavirus in Guayaquil, Ecuador.
Image: Vicente Gaibor del Pino/Reuters

Close to home, health authorities stress the importance of social distancing to combat infection. This places a heavy burden on communities in densely populated areas where outside space is impossible. One can only marvel at the efforts of the ministry of human settlements to move some of the inhabitants out of harm’s way. It is a counterintuitive measure in a country where resettlements were the cornerstone of legislation such as the 1923 Natives (Urban Areas) Act. Here, blacks were defined as temporary sojourners tolerated only insofar as they ministered to the wants of the white population.

The bitterness that carries over from that unresolved past manifests itself on social media, where digital communities break the strictures of isolation. Two disparate images caught my attention. In one, a bird’s-eye shot of police in action, shows two women out on the street during lockdown; one is black and the other, cradling a small dog under her arm, is white. The cop whisks the black woman into the back of his police van. The commentator, obviously the one doing the filming, wonders loudly if the white woman will also get arrested, his tone communicating his doubt. Soon enough, though, the white woman is also hustled into the van. The commentator immediately switches from scornfulness to effusive praise of constabulary fairness.

The second image, a cartoon, shows an overloaded taxi where the driver is still anxious about having escaped police in action, whom he sees otherwise engaged in pursuit of something else. The driver’s companion reassures him, saying: “Nope, someone was walking the dog.”

These images illustrate how, even though united in adversity, people’s prejudices will always raise their ugly heads. There is a widespread belief that law enforcement is harsher – and sometimes quite ready to add insult to injury – when controlling black transgressors and looks the other way when it comes to white outlaws who see themselves as invincible. 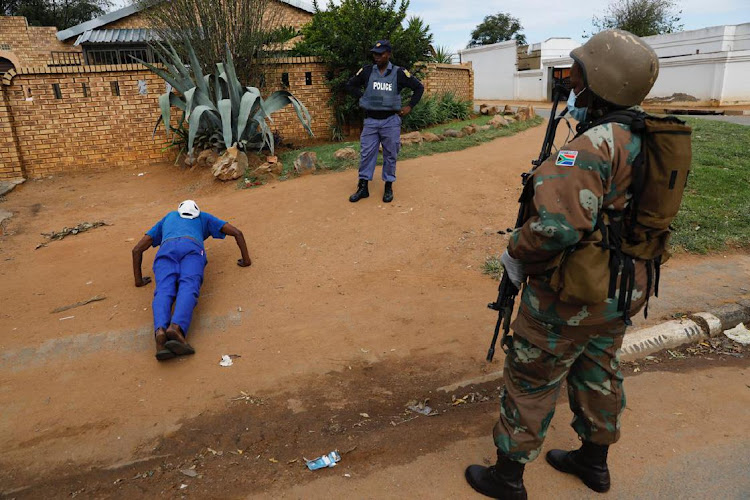 Push-ups A policeman instructs a man to do push-ups during an operation in Eldorado Park, on the fourth day of a nationwide lockdown.
Image: Alon Skuy

The highhandedness of law enforcement had me worried it would bring about a backlash. You don’t use jackboot tactics in Alexandra township, for instance, if you don’t want a replay of the violent attacks, carried out from December 1986 to February 1987 and credited to the Azanian People’s Liberation Army, when about 13 members of the SADF were killed. Most civic-minded members of our society take proprietorial pride in the SAPS and the SANDF as agents of stability. However, the problem arises when they are seen to be brutalising the very people they are meant to protect.

Fortunately, after a hiatus that must have been resolved through back channels, Alexandra, and pretty much the rest of the country, seems to have settled into the abnormal normality of observing the lockdown. Here and there will be intransigence, which, one gets the feeling sometimes, police minister Bheki Cele would welcome with open arms or booted foot, as the case may be. Offending military and police personnel are now facing charges. Similarly, with wayward public officials, there seems to be no tolerance on the part of the government and constituent political parties.

The speed and coordination towards ensuring a successful lockdown would not have happened under normal conditions.

The positive side of the Covid-19 pandemic, that is, if a pandemic could have a positive side, is that the South African government has cured itself of its schizophrenia. It has earned praise from all quarters. There is no doubt President Cyril Ramaphosa and health minister Dr Zweli Mkhize – supported by the whole cabinet, except for one or two flamboyant outliers – have done a lot to calm the waters and make the unacceptable palatable. Ramaphosa has not only become our leader but has set a global benchmark that has shamed the jingoistic denialists in the so-called developed world. But we need to see the same decisiveness in dealing with a post-Covid-19 society, which will be just as challenging as this phase of managing a disaster – and will need the same calibre of leadership.

The speed and coordination towards ensuring a successful lockdown would not have happened under normal conditions. And by normal I mean endless consultations, sometimes with people or agencies that should not have been approached in the first place. It’s a cause of bitterness wondering why, for instance, communities could have water shortages when water could be delivered with such alacrity once the lockdown got under way. Oftentimes, the party-political considerations have allowed such a cacophony of voices that it’s been difficult to know who really is calling the shots. In many cases, the party – any party, be it ANC or EFF – has been able to wag the government dog. Certain leaders and weak-eyed visionaries have weighed in on matters that should be the domain of government policy. The resultant stasis has been the order of the day. As for the president, it’s only now that he can actually become presidential and give assurance to the anxious public; for a moment he can shrug off the hollow howls of factional gadflies.

We are tiny specks being humbled by something even tinier

One hopes that this newfound resolve will extend to the management of the economy, an arena not short of self-appointed experts, to move the country out of the slump it is in. A slump exacerbated by the virus, but which had its origins in an absence of vision and a surfeit of grandstanding. The country is in this mess following years of mismanagement and corruption, which have, in certain quarters, been consecrated as channels to empower the poorest of the poor.

When we emerge out of this nightmare, the poorest of the poor will still be there. The food parcels given to the destitute won’t be in lieu of the economic transformation that needs to take place, but their very presence means the poor will no longer be ignored. There’ll be the skinny, young man carrying a pile of books on a variety of subjects from pulp fiction to poetry. There’ll be his counterparts living on the margins, the car guards or the pantsula dancers whose empty beer crates are percussive accompaniment to their inspired repertoire, evoking the lines from a poem by Mongane Serote: Oh you black boys,/You thin shadows who emerge like a chill in the night.

There will be women young and old, either fielding snot-nosed toddlers or tapping empty paper cups under the noses of motorists to indicate the depth of their deprivation.

There will be us, the survivors of a storm, who will have to forge a different and more meaningful relationship with our fellow men and women, in the chastening awareness of our unimportance. Our disappearance during the lockdown could have been a rehearsal for our final departure. We will hear new stories about solitude and how we might have come to know ourselves better. Some of the stories will be grim, given the scourge of gender-based violence in our society. Isolation also means that many women will be fated to realise, as Susanne Moore of the Guardian put it, that home is where the hatred is.

Society is in hibernation, but instead of succumbing to lengthy days of inactivity, this could be the time for regeneration. Our political movements should rethink whether they are mere vehicles for self-perpetuation or if they have a role to move society forward. If there’s no serious reorganising, there’s no re-emergence from the long hard winter ahead.

Mandla Langa is one of SA’s most respected authors. In 2007 he was awarded the National Order of Ikhamanga for literary, journalistic and cultural achievements. Among his many works is Dare Not Linger: The Presidential Years, the second volume of Nelson Mandela’s autobiography.

We are tiny specks being humbled by something ...