A WORD IN THE HAND: ID 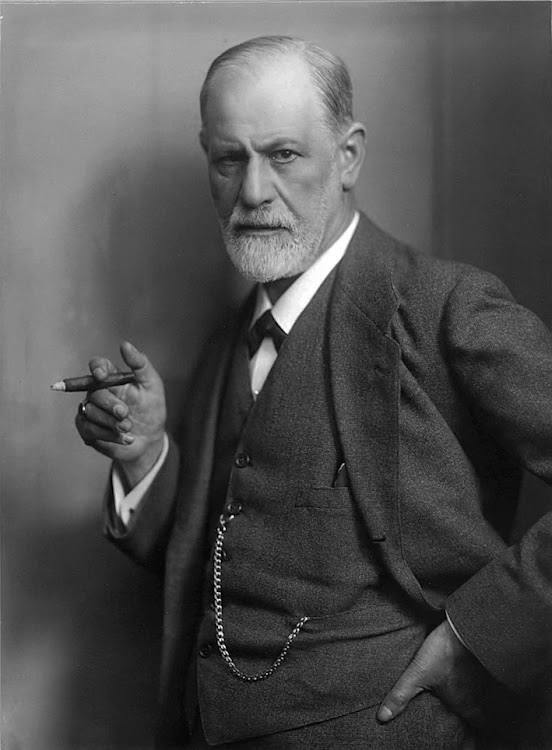 Psycho active Sigmund Freud's model of the human psyche still has some merit - his id, ego and superego are still with us.
Image: Max Halberstadt/Wikimedia Commons

Has anyone noticed that when you type “lockdown” into a text or WhatsApp message, the smartphone predictive thingie suggests “blues” as the next word you might want to use?

These algorithms are a result of whatever word combinations are most commonly used. This one tells us, as if we didn’t know already, that many people are not in the most robust state of mental health right now.

Therapists are trying their best to help sad and angry people cope by holding sessions online, but as a psychologist wrote last week, this is not ideal. It’s too easy for frustrated, unhappy patients to give up and walk out. They don’t have to wait for mom or an Uber or any awkward opening of gates to exit the premises. They just click an icon on the screen that says “leave meeting” and boom, they’re gone.

It can’t be satisfying for attention seekers who like to slam doors. Adults who behave in this childish way were once described by a certain school of psychotherapists as having an imbalance between the id, the ego and the superego.

Those three words, coined by Austrian neurologist Sigmund Freud, have become as unfashionable as Freud himself. The father of psychoanalysis fell out of favour for many reasons, one because his mode of therapy took way too long, another because his opinion of women – in a rough and unscientific nutshell one could say he viewed them as hysterical neurotics who needed more orgasms – has become a bit outmoded.

As deserved as his latter unpopularity might be, Freud’s model of the human psyche still has some merit. Although the terms have fallen largely by the wayside, his id, ego and superego are still with us.

Most textbooks start with the id, but it’s the superego that holds us together, so I think it deserves top billing here. Freud called our moral conscience, or the part of us that wants to be thought nice and sweet and civilised, the “Über-Ich”, meaning “over me” or, less literally, the “top me”.

When his works were translated into English, this became “superego” partly because “over me” sounded silly and partly because in those days the prefix “super” was not attached to every second adjective the way it is now.

I hesitate to use Donald Trump as an example because it’s like picking carrots out of vomit, but you could say he puts the id in covfefe.

This super thing has become tedious, incidentally. Why is it no longer enough to be sad, happy, funny, angry or thirsty? Why must we be superhappy, supersad, superfunny, super angry and superthirsty? Outside of lockdown conditions – in which superthirsty is widely accurate – it seems superexcessive.

The superego, in psychoanalytic terms, is not a superfine version of ego. Today we use the word “ego” mostly in a derogatory sense to describe someone puffed up with self-importance, but to Freud it was the mediator between the superego – the part of us that aims for high ideals like sharing and caring – and the selfish caveman part that wants to grab and keep everything for ourselves no matter who or what gets harmed in the process.

That base, unthinking, uncaring, illogical, impulsive, solipsistic, self-obsessed, greedy, grasping part was called “das es” by Freud, meaning “the it” in German. Fancy English translators decided instead to use the Latin “id”, probably because “it” was too ordinary for such an important facet of our natures.

I might have made id sound like a bad thing but it is essential, this instinctive and completely unconscious impulse that frequently fights against our rational or moral decisions.

Id is what drives us to avoid harm and seek security. If tempered by the superego – with a little negotiation between the two by the everyday workhorse ego – it helps us survive and flourish.

Without tempering by the superego, however, id thinks it really is a superhero. An id out of control makes terrible decisions and blames others for the consequences. It says incomprehensible things, has no regard for anyone else and generally struts around like a big, bratty kid.

I hesitate to use Donald Trump as an example because it’s like picking carrots out of vomit, but you could say he puts the id in covfefe.

Getting back to lockdown blues, if algorithms are a measure of the world’s mental health, it’s bad but not all bad.

Return of the studied dig shows you Kant put a ...

A mangling is a really obvious master stroke to ...

PC brigade might milk a cartoon muppet as a sop ...

Our romantic fate was SWANK when we switched to ...

Moving off the couch could help fend off deadly infections