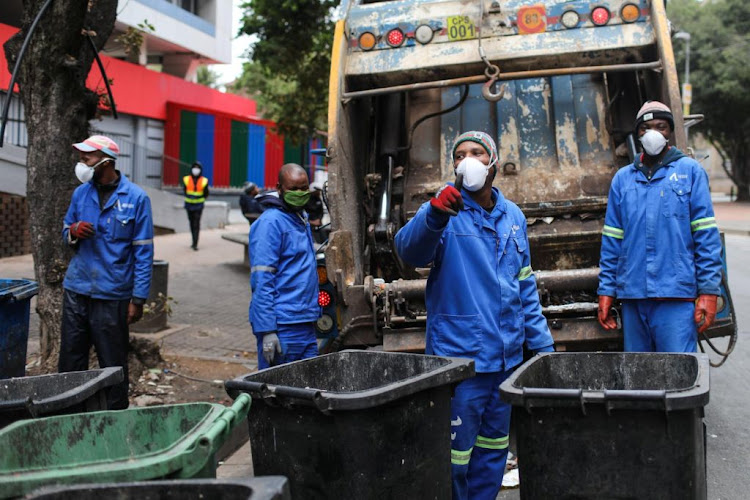 It's bin too long President Cyril Ramaphosa and his cabinet recognise that the country cannot be shut for much longer, and certain services simply must resume.
Image: Alaister Russell/The Sunday Times

As the first three-week lockdown period was winding to its end the citizenry was itching for certainty about the future. After complying with lockdown regulations for two weeks, many wanted to get back to work. The money is running out, after all. Businesses and jobs are on the line. Many were realising that family is lovely, but not always at close quarters with limited activities to engage in. Children are restless and unruly. Even they want to go back to school. Thus, hopes of a return to normality were dashed when Ramaphosa announced the two-week extension, leaving us uncertain and worried about the future.

Many in the business community and the opposition have warned of dire consequences if we do not get back to work. Many have in turn criticised them for allegedly putting the economy ahead of saving human lives.

This is unfair and ignores the hope and the “third way” that Ramaphosa inserted into the speech. That hope emanates from the fact that he, together with his cabinet, recognise that the country cannot be shut for much longer and that in fact at this stage of the pandemic we need to start slowly and cautiously getting back to work.

My view is that the government is trying to avoid both doomsday scenarios (“lockdown continuation will totally kill the economy” or “open up the country and everyone will die!”) as much as possible. Instead, the regulations to be announced this week will aim for a middle way that will allow the country to enjoy the upside of both extreme options. This third-way scenario is a careful, gradual, scientifically monitored reopening of SA coupled with intensified screening, testing and management (isolation and quarantining) of the populace for Covid-19.

This is a scenario that recognises that an economy that is saved at the expense of human lives is worth nothing. Human lives that are left with such a devastated economy that the country descends into anarchy are also not worth much. That is why the government’s proposals this week will (hopefully) incorporate the best of the two extremes into something that will cushion the country from the absolute worst of this pandemic.

This week will be crucial in our evolving response to this pandemic. Ramaphosa and his ministers will begin announcements on which sectors of the economy will be brought back on stream. I believe key sectors which have the ability to implement health and safety measures, such as mining, will be first to go back to work, with stringent stipulations on protective gear, social distancing, disinfection of workplaces, washing and sanitising of hands, and other protocols in place. Fast-food outlets and restaurants may follow suit, with deliveries and takeaways only.

[A partial reopening] puts the solution to this problem in people’s hands and mitigates against the sense of a top-down solution with its attendant governance challenges.

The work week will be open to these select businesses, but the weekend will likely be under lockdown, with limited hours open. Cigarettes will likely be sold. Alcohol? Takeaways, perhaps. Funerals and other gatherings will be open to fewer than 50 people. We will still be under lockdown but will have slightly more access to services that can be controlled for spread of the virus.

This gives the cabinet the ability to let the economy come back to life while continuing with efforts to contain the virus and slow its spread. This means hospitals are not overwhelmed (remember that New York hospitals are overwhelmed and the city is now burying people in mass graves) and the curve hopefully remains flat.

There is a huge upside for the country’s leaders in opening up the country. Doing it gradually from this week will give the citizenry a sense of having achieved a great and difficult feat, as asked for by its leadership, as they begin to see the light of a return to normality in two weeks’ time. The country has indeed achieved a lot, and its normally lackadaisical leaders have on the whole been inspirational, resolute, decisive and steady under pressure despite the senseless pronouncements and acts of a few bad apples.

A partial opening will allow citizens to buy into the message that “much still has to be done” to prevent new infections and the spread of the disease. It puts the solution to this problem in people’s hands and mitigates against the sense of a top-down solution with its attendant governance challenges.

Obviously, underlying these decisions will be the science: have we slowed down the virus’s progress? Are we confident in projections that we can keep it contained and there will not be a deadly resurgence?

Whatever horror Covid-19 brings, this is the hour ...

The construction mafia run wild, but Cyril and ...

Ditch the post-lockdown illusions. Our thuggish leaders will still be here