Jolted awake by Patrice, Cyril zooms in on the billion-rand ...

When Elephant One checks in with his brother-in-law, he can’t help bringing up the two bil from Stellenbosch 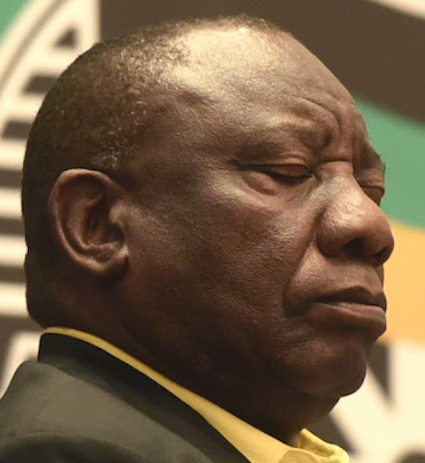 Just one more ... Tonight he would try to get three hours of sleep instead of two. Now, it was important to check in with the family. But later ... Hmmm. Three hours. Three whole ...
Image: Gallo Images/Brenton Geach

As Cyril Ramaphosa assumed his most commanding expression and waited for the call to start, he had to admit that he hadn’t had the ideal introduction to the video conferencing platform. Two days earlier, Patrice Motsepe, his brother-in-law, had asked him when he was going to try Zoom, and Ramaphosa had thought he’d said Zuma, and he’d spent five minutes explaining that he didn’t know when, exactly, he was going to try Zuma, because there were complex legal and political repercussions for doing so.

Now, however, all the wrinkles had been ironed out, except, he noted, for those on his face. Tonight he would try to get three hours of sleep instead of two. Now, it was important to check in with the family. But later ... Hmmm. Three hours. Three whole ...

He was jolted awake by Motsepe’s voice.

“Elephant One claims to be asymptomatic!” yelled the agent. “Initiating evacuation and isolation!”

Motsepe leaned in close. His face filled the screen. Damn, he looked good for his age. He was probably getting four or even five hours a night. Bastard.

“I was just clearing my throat!”

Ramaphosa sighed and pulled the lever under his desk that opened the large trapdoor in the middle of the floor. The three agents dropped out of sight with a faintly disbelieving scream.

“Ag,” shrugged Motsepe. “You know. Same same. The kids are bouncing off the walls a bit.”

“No,” said Motsepe. “They’re literally bouncing off the walls. We have an antigravity room.”

Ramaphosa sniffed and toyed with a paperclip. “Must have cost a bit.”

“Yes, it is,” snapped Motsepe. “It’s literally all you’ve said, every day for a week, every time we’ve spoken.”

“Well, if you’d just done the right thing I wouldn’t have had to have said it.”

Motsepe leaned in close. His face filled the screen. Damn, he looked good for his age. He was probably getting four or even five hours a night. Bastard. “Matamela,” he said. “I gave your fund a billion rand. A billion.”

“You did,” said Ramaphosa. “You definitely did. And I’m sure you had your reasons for only doing it a week after the Ruperts and Oppenheimers.”

Motsepe raised a finger but Ramaphosa cut him short. “All I’m saying,” said Ramaphosa, “is it was a bit embarrassing. I launch a big fund, the Stellenbosch crew peels off two bil, but my own brother in law takes a week to ... ”

“Do you know how difficult it is to access a billion rand at short notice?” said Motsepe.

“Oh sure!” snorted Motsepe. “Let’s all just press our eyeballs straight into a puddle of coronavirus, why don’t we?”

“Look,” said Ramaphosa, “I don’t want to turn this into a huge thing. I was just calling to say hi.”

There was a long silence.

Motsepe flung himself back in his chair and slapped his hands over his eyes. “Do you know how much money Oppenheimer and Rupert have?” he yelled.

Ramaphosa swallowed hard. “That ... that was way harsh, Patrice.”

There was another long pause.

Ramaphosa sighed. “I should probably go and let the secret service guys out of the basement.”

He took a long breath in, and let it out in a shuddering sigh. He was asleep before it ended.

Less is Mir: if you think your lockdown is bad, ...

Think you’ve got a handle on virus fakery? We’ve ...

The booze ban will only lead to more bored binge drinking, say experts