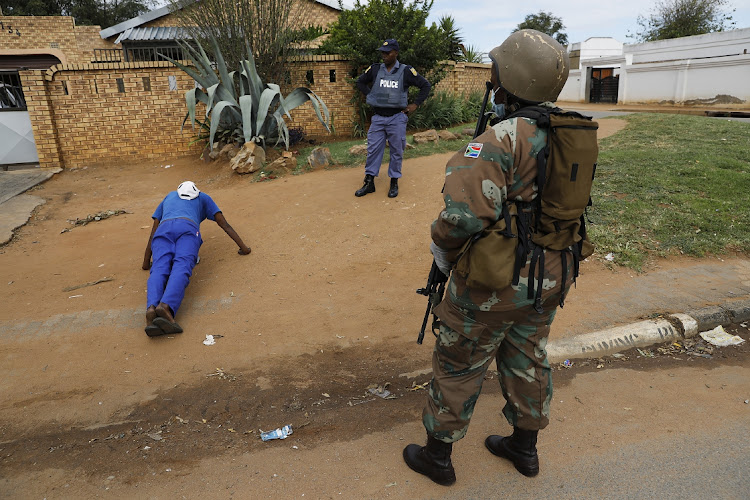 In 1966, two eminent academics at the University of Natal (as it then was), professors Ronald Albino and Tony Matthews, published a paper in the South African Law Journal entitled “The permanence of the temporary”.

The article was an examination of the 90-day law and the 180-day detention regime which allowed the National Party regime, in the interests of security, to detain citizens without recourse to the courts or other essential liberties.

Of course, in the title was the rub: what the government offered as a temporary measure to meet an emergency situation would, the authors prophesied, become a permanent condition. And so it proved as legislated detention – under whose framework shocking abuses and deaths occurred – endured in this country for 25 years after the article was penned.

In the Sunday Times, Barney Mthombothi commented on the black-hatted response of police minister Bheki Cele – “wait until you see much force”. He noted the close connection between the John Vorster 90-day regime of old and the securocrats who adorn the national command council today, itself an Orwellian construction fitted out for current times.

We are now faced, here and across the whole world, with the greatest public health emergency in our lifetimes. Because of it we are, correctly, prepared to forego freedom and liberty in the short run for our health and lives in the long term – an eminently reasonable swap. Just so long as it is temporary.

In such a situation we tend to defer to authority. That is why Cyril Ramaphosa’s televised addresses have been so well and warmly received. And his proactive and quick responses on the health front stand in stark contrast to his somnambulant wavering on the economic battlefield. He is likely to win an exemplary grade from the World Health Organisation (WHO) just as he deservedly visited a failed grade upon this economy on Friday night from Moody’s.

Even the serial missteps, the denialism, the blame-shifting and the u-turns that have characterised Donald Trump’s leadership during the coronavirus pandemic have had a counterintuitive effect on his standing. Polls indicate an uptick, not a downgrade, in his approval ratings. In a crisis of such unfathomable proportion, people crave leadership and reassurance. Boldness, even bragging, wins over doubt and uncertainty.

But for all the assuredness of Ramaphosa in his faultless address to the nation on Monday evening, he had the week before done something which not even the authoritarian-minded Trump had ever contemplated: he had donned a military uniform, crossing the line between the civilian leadership he embodies and the military-mindedness his lesser ministers crave to impose on the country.

This time and in this war, Ramaphosa needs to actually implement what he says. And not be either ‘shocked’ or ‘surprised’ when it doesn’t happen.

And we have recent and graphic evidence that the public order policing of today, often extreme and intemperate, is not necessarily that far removed from the chaos of seven years ago which culminated in the Marikana Massacre.

Of course we are fortunate that Ramaphosa is at the helm right now. He is, for example, no Viktor Orban – the self-styled “illiberal democrat” in Hungary who has used the coronavirus crisis to transform his EU-democracy into a fully fledged dictatorship by handing himself unlimited power.

Ramaphosa is both empathetic and sincere and seized with the urgency of the situation. But he also needs now, or in the remaining 17 days of the lockdown, to translate his comforting and sensible words into decisive action.

And that doesn’t mean forcing errant citizens into pavement punishment at the hands of erring policemen. It also does not mean allowing every whim (a unique ban here on booze and cigarettes, for example, and a prohibition on even limited outdoor exercise) of some petty, punitive or even high-minded minister to ride their favoured hobby horses. This will dismount  the essence of flattening the curve. Privations that adversely affect physical and mental health are most unlikely to encourage compliance.

Nor does it mean making permanent what the central planners and state-centrics in our midst have been empowered to do right now: control prices, proscribe goods and production, and close down stores. These essential temporary measures must not become a permanent future condition. And every departure from our freedom and liberty, essential for today and the next few weeks, needs to be jettisoned as soon as the emergency objectively passes.

This means doing now in the health realm what Ramaphosa ducked for the past two years in the economy. You remember last February he promised to split Eskom into three separate units “immediately” (it has yet to happen); or his promise this year to “immediately” allow independent power producers and municipalities to add to the energy grid (it hasn’t happened yet, either). That is precisely why, in the absence of promised reforms, even on these modest items, Moody’s downgraded us.

In the words of Ken Offori-Ata, finance minister of Ghana, as reported in the Financial Times, the continent has reached a “break the glass moment” where drastic action is needed to “avoid a human and economic catastrophe”.

Ramaphosa’s avoidance measures – lock down, test, isolate the infected and at-risk, and trace aggressively all contacts with positive cases – are the only ways to go, as best we can tell. But between the hope that this is the correct path, for a virus whose course is still so unclear, is a better choice than the certainty of catastrophe.

This time and in this war, Ramaphosa needs to actually implement what he says. And not be either “shocked” or “surprised” when it doesn’t happen.

And that is why we need to support him at this time of necessity. But as empowered citizens, not as cringing subjects. That’s why the warning offered by William Pitt the Younger is a handy guide against overreach and making permanent in the future the necessary measures of today. He said, way back in 1783, that “necessity is the plea for every infringement of human freedom, the argument of tyrants, the creed of slaves”.

As Covid-19 threatens the Trump roadshow, an ...

Come on Cyril! FW did it, Mantashe has just done ...