WORDS IN THE HAND: DECIMATING QUARANTINE AND ISOLATION 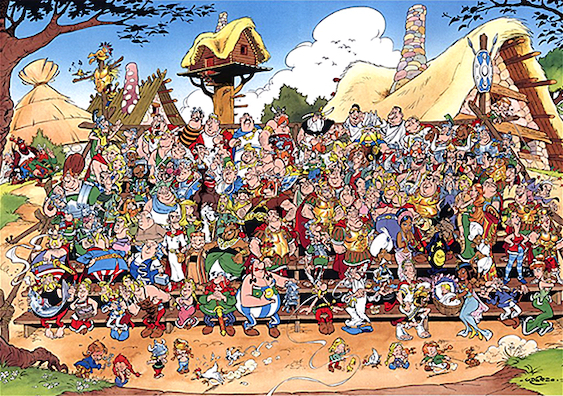 Unmitigated Gaul Even a small Gaulish village that had stood firm against the Romans would be punished by having one-tenth of its population murdered.
Image: Wikipedia

“Splendid isolation” was a term coined in 1896 by a Canadian called George Eulas Foster.

Praising the British for their skill in avoiding intimacy with other European nations, Foster wrote: “In these somewhat troublesome days when the great Mother Empire stands splendidly isolated in Europe.”

This comment might seem splendidly ironic in our somewhat troublesome days, a century or so later, but isolation, sadly, is no longer a word of unqualified splendour.

A few years before Foster’s praise of isolation, the word “isolated” was itself a foreigner of suspicious origins. An anonymous satire published in English in 1740 asked the reader’s pardon for using the “foreign word” isolated.

The best way to bring a word into common use is to use it humorously, and thus it was that “isolated” and “isolation” – previously the preserve of those who like their loaves long and thin – became the marmalade of English breakfast tables.

Verbs frequently follow adjectives into being, which seems disingenuous, but that’s the way language rolls. “To isolate” – meaning to detach, to make alone – began to be used as a word of action quite a long time after the state of being apart had already been described, which suggests that those set apart had not been forcibly separated but had chosen their state of apartness.

It seems a little odd, in the light of this, that “self-isolation” should become a word.

Incidentally, before it was French, the noun isolation came from Italy, as did the verb isolate, whether enacted by oneself or others.

In the case of the novel coronavirus, decimate is not even close, given that only one-hundredth of those afflicted seem to succumb.

Also incidentally, Foster’s coining of the “splendid isolation” phrase was largely in response to Britain’s pulling out of “the concert of Europe”. This was a politically aligned group of countries, not a collection of bands playing in some soggy park, but since all concerts have now been cancelled due to quarantine, this is perhaps irrelevant.

Quarantine, too, is an interesting word. It has been used more in the past few weeks than probably at any other time since the period from the 1300s to the 1700s, when it described the 40-day period of isolation enforced on a ship thought to be carrying people who might be carrying a disease, which unquestionably carried fear.

Adapted from the Italian quaranta giorni – 40 days – “quarantine” has lost its specific numeric association and now means any period of time, however long or short, during which a person should be isolated from other people to avoid infecting them.

This migration of words from their origins is not new. Like quarantine, the word “decimate” no longer means what it used to.

In ancient Roman times, a city – or even a small Gaulish village – that had stood firm against the helmeted invaders for some time, only to be conquered, would be punished by having one-tenth of its population murdered.

Decimation, these days, no longer means one in 10. It is used willy-nilly to describe the wholesale slaughter or disappearance of everything.

In the case of the novel coronavirus, decimate is not even close, given that only one-hundredth of those afflicted seem to succumb. But to be human is to exaggerate. Or to isolate, in our current state of being.

Whether or not this isolation is splendid depends, of course, on one’s bookshelf. Or one’s wifi connection.

This incidence of Latin evolution is no accident ...

The PC police can go potty, loopy and gaga, but ...

Waiters are has-beans when they get a double shot ...

Lords know, there’s newt so silly as a rat-arsed ...

Nero and other Dum-asses got up the Bard’s nose ...

Cyril’s dad was economic with his words, but not with his loving care