He won’t be at the London investor summit either, but considering the SA mess, what would he have said anyway? 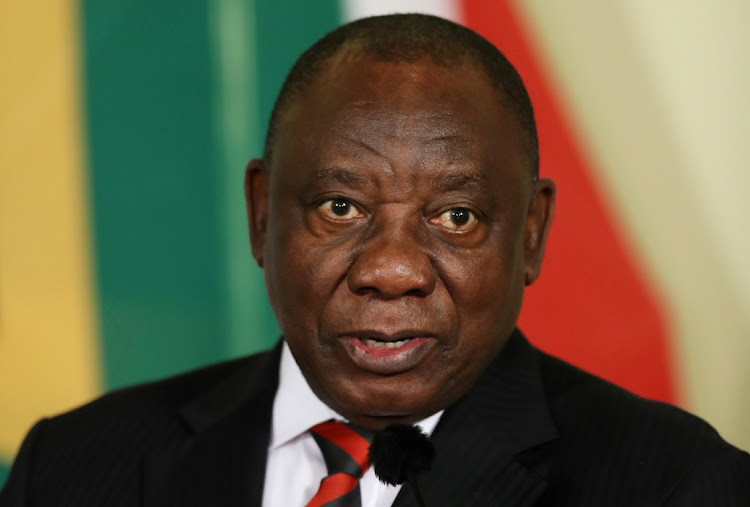 Switched off 'The New Dawn' has darkened in every which way imaginable. Even Cyril Ramaphosa's modest promise to keep the lights on over Christmas turned into a false prophecy.
Image: Reuters/Siphiwe Sibeko

Imagine a pow wow in London this week, featuring the heir to the throne Prince William and his self-dethroning brother, Harry, and a cast of international and African worthies.

The title of this gathering, “UK-Africa Investment Summit 2020”, of the great and the good, including a clutch of continental leaders, is both virtuous and self-evidently helpful to a continent in need of investment and a host country, Britain, seeking markets in its brave new post-Brexit world.

Little wonder then that, along with the Davos shindig across the Alps, these two international conferences are hot-ticket destinations.

The bigger wonder at both events is the conspicuous absence of Cyril Ramaphosa. An attendee of the World Economic Forum for years, this year’s chat shop in Switzerland will be a Cyril-free zone.

Likewise, only last Thursday did he notify the British government that he would give the UK Africa Investment summit a miss, and deputed international relations minister Naledi Pandor and finance minister Tito Mboweni to lead the SA delegation.

A Davos insider mentioned to me the other day that “Cyril is always in his element here and it plays to his strengths: he is a great schmoozer; he can work the room really well and he can make his generalised comments without the need to worry about being held to account if his normal brand of wishful thinking doesn’t work out in reality”.

But you have to wonder exactly what Cyril would say to an audience of hard-bitten global business leaders in Davos or a room full of investor types in London.

“The New Dawn” has darkened in every which way imaginable. Even his modest promise to keep the lights on here over Christmas turned into a false prophecy, and he is right now in a battle royale with his own organisation simply to preserve the prerogative his party so liberally and unhesitatingly granted Jacob Zuma: the right for the president to appoint and retain ministers, and to organise government departments fit for purpose.

And other than SA offering the romantic old-world prospect of dinner by candlelight, what have SA’s investment envoys to offer?

And doubtless his abortive visit to the pyramids during stage 6 load shedding in December is seared in his memory as an experience never to be repeated.

But what precisely, given the mountain of economic chaos back home, would Cyril, or Tito or Naledi Pandor actually say to hard-bitten investor types? Another absentee from Davos this year is Michael Bloomberg, now an aspirant candidate for the US presidency. But his famous aphorism, “In God we trust, but for the rest bring me the data”, is very much the spirit of gatherings such as Davos and London this week.

And other than SA offering the romantic old-world prospect of dinner by candlelight, what have SA’s investment envoys to offer?

The state at home has all but collapsed, and the governing party is in a fight to the finish over its carcass. Meantime, the government ploughs on demanding more and more control over the parts of the country which actually do function – from sporting codes to private hospitals. Even Voltaire’s Doctor Pangloss – as in “all is for the best in the best of all possible worlds” – might find his optimism running on empty.

A friend of mine in London involved in organising the UK Africa summit sent me a note last week, noting  that Cyril’s withdrawal from the event had led to “a lot of animated comments at the preparatory meeting”. He also advised that the news coincided with an op-ed column, which appeared on the same day, by award-winning journalist Jenni Russell, which was prominently featured on January 16 in The Times (of London). He enclosed a copy in his note.

Headlined “The Light of Hope is Going Out for South Africa”, she commences with a dirge on the decline she witnessed on a recent visit.

“I’ve always returned from South Africa aghast, anxious but ultimately hopeful. It surely can’t become too corrupt and too inefficient, I think. The triple forces of capitalism, democracy and the free press will prevent it. Rotten politicians can be replaced, crooked employees and the individuals paying them can be exposed. Too many people and profitable businesses have an interest in keeping the state functioning, and the lights on for it to fall apart.”

But on her recent visit, she recanted her previous hopefulness, triggered in part by trying to help an 87-year-old during an episode of load-shedding during the period when Cyril promised the lights would be kept on.

“This year, as in the last, the lights are literally being switched off, and I’ve lost that confidence. For the first time I fear the country may be sliding towards irreversible decay.”

There are three (doubtless some more as well) ways to respond to this excoriating piece, written clearly more in sorrow than anger.

Dismissal: Pesky foreigner, good riddance, don’t come back here, prejudiced outsider, etc. The inconvenient truth with this approach is that the people who buy our bonds which keeps the state and its social spending afloat are precisely the target audience for such an article.

Then there is resignation: Jenni Russell eloquently summarises a lot of middle-class views at home as well, and there is nothing to be done, the downward slope is in plain view and we are well down it already.

Finally, there is the course correction: okay, the writing is on the wall, but I can read its message and actually it is addressed to me.

Since Cyril won’t be either in London or Davos this week, let us hope, perhaps against every recent expectation, that he takes the final or third approach. Hang on to the right ministers, ditch the crooks and incompetents, change course to keep the lights on. What needs to be done is well known. The courage to do it is not.

The good news first: SA isn’t as doomed as you ...

Corruption and conspiracies: the lies that bind ...

How a slip of the tongue far away helped bring ...