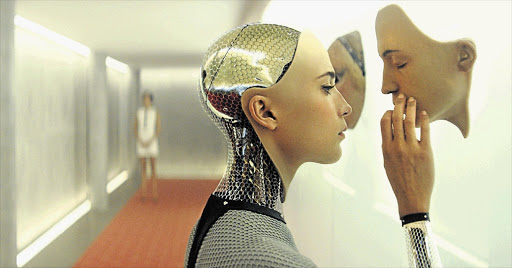 'Ex-Machina' is a 2015 science fiction thriller film that tells the story of a programmer who administers the Turing test to an android with artificial intelligence and which imagines a world where artifical intelligence is indistinguishable from human intelligence
Image: DNA FILMS

Some of the recent headlines have been dire: “Automation threatens 800 million jobs”,“Robots are coming for jobs”, “Will we work for robots?”.
With every advance in artificial intelligence and machine learning, the predictions of massive displacements in the labour market become more extreme. Yet the growing fear of human obsolescence in the workplace is misplaced — as illustrated decades ago in what has come to be known as Polanyi’s Paradox.

In 1966, Michael Polanyi, the noted Oxford academic, explained why machines are unbeatable at some tasks and utterly incompetent at others. Assessing human capabilities, he concluded that “we know more than we can tell”. In other words, humans excel at tasks that we cannot satisfactorily explain how to carry out. The fact that we cannot explain how to do these things — like write a sonnet or dribble a basketball — correlates directly to the near impossibility of programming a machine to do them for us.

Because of Polanyi’s Paradox, it is reasonable to expect that, while the latest wave of advances in AI and automation will reshape the labour market dynamically in many ways, making certain jobs redundant and creating new ones that we can’t even imagine today, thinking machines are not about to replace human beings.

As an example, at the Associated Press, AI programmes now use templates to produce thousands of competent, if not quite elegant, news articles based on corporate earnings or sports scores. Yet when we look closely at what the machines are doing, we see it is mind-numbing, repetitive work that journalists are typically glad to avoid. The new technology gives them more time to go out, talk to people and report thoughtfully on what’s happening in the real world.

Occupations like “buggy driver” and “lamp lighter” all but vanished in the 20th century, but workers found employment in new tasks suited to the times.

Impressive new developments in AI, like IBM Watson and its success at analysing medical data, have raised concerns that it might soon be possible to replace workers in jobs that require more skill and training than were affected by past waves of automation.

Again we come back to Polanyi’s Paradox. Today, the machines still excel mainly at tasks that can be broken down into a series of discrete steps. There will always be room for humans to do the kinds of things that humans do best. Most mainstream economists have concluded that advances in automation will influence the kinds of jobs that are available in the future — but they will not result in structural unemployment.

When we hear about jobs that are “lost” as a result of technological change, it is typically only job descriptions that have become obsolete. Occupations like “buggy driver” and “lamp lighter” all but vanished in the 20th century, but workers found employment in new tasks suited to the times. My 81-year-old mother recently asked her grandson what he wishes to become when he grows up. His answer “maybe an app developer” left her puzzled.

When spreadsheet software appeared in the Eighties, it was widely predicted that it would decimate accounting jobs. In fact, the number of accountants and auditors working in the United States rose — from 1.1m in 1985 to 1.4m in 2016.
The new technology expanded the scope of what accountants could do and generated increased demand for their services. This is one of the critical by-products of increased productivity — greater demand for the new benefits made possible by technology.
It is true that some traditional jobs, like in coal mining, now employ a small fraction of the numbers they did before they were automated. But the job market keeps evolving. It should come as little surprise that there are now many more people working as web designers in the United States than as coal miners.

If web design doesn’t appeal to everyone, other new employment opportunities are opening up almost every day — in fields like user experience design, nanotechnology and renewable energy... or even in artisanal handicrafts and organic farming. Automation itself is now a $200bn (£143bn) industry, growing 3pc to 6pc a year. I can attest that, at my company and among our many suppliers and customers, it offers a wide range of compelling traditional and newly emerging jobs.

The job market has been historically dynamic and will always keep changing. It is our responsibility as leaders to take the people with us and provide direction and support in the changing world. The key to managing these changes is effective co-operation between government, education and the private sector.

We must work together to develop and implement a new ecosystem of people development containing training programmes for jobseekers who need them and lifelong development activities for all. We must ensure that education at all levels keeps up with the needs of employers and the opportunities available to workers. The pace of change, the reach and scope of technological innovation is unprecedented and requires a new thinking towards our people to ensure prosperity for everyone.

The fear of losing one’s livelihood to automation has been with us for a long time. Yet the idea that humans are somehow losing overall to machines is inaccurate. Rather than needless hand-wringing about the robots becoming our masters, we must channel our energies into mastering robotics, AI and other technologies for better lives and a new quality of jobs and prosperity. — The Daily Telegraph

Overvaal: Nothing is as black or white as it seems