School’s out – again. But it doesn’t matter, say virus experts

As the debate rages about reopening, medical minds insist it’s perfectly okay to send kids back to class

‘Devastation’: yet another blow for tourism, hospitality sectors

They weren’t doing well before lockdown, now they have to keep their doors closed for even longer

Turn for the better: corona tummy tactic may be a big life saver

On top of things: as SA closed borders, she chose Kilimanjaro

The original plan was to do the trek with her sons at the end of 2020, but all that changed when Covid-19 hit

You’ve lost your income but insurance isn’t forking out? Here’s why

The lesson of the pandemic is: be very, very careful about what credit life insurance you take out

If your Covid-19 travel claim has been rejected, resubmit it

The law insists that, even in this these unusual times, the company must consider your unique circumstances

Even if they have cover for epidemics in their policies, there’s a loophole that means many will get no cash

EDITORIAL | Beyond smokes, level 3 rules get even more mindless

Despite concessions and sensible restrictions, our government still appears to have lost touch with reality

A porous border: that’s what stands between SA and Isis

SA and Mozambique are in talks, says Dirco, as Isis tightens its grip on gas-rich Cabo Delgado

Exercise fairness, gyms: meet your customers in the middle

Charging consumers, in full, for services they are not receiving is unfair and unjustified

They wrote it this week: No, Ma, I’ve no idea how a loo brush got up my bum

Create an A+ study area for your children for A+ results

From sleep to a bit of la petite mort: the unexpected joys of lockdown

As level 3 arrives, we look back at the good things that have come from being stuck at home

Read all about it! Google goes big with a cracker of an app

Google’s new app reads aloud articles, such as recipes, helps with homeschooling, translations and much more

Blast from the past: The one and only Tinkler

big gap for a big mac A worker measures social distancing for customers ahead of food becoming available for collection and delivery from restaurants and takeaways under level 3 of lockdown on Monday.
Image: Esa Alexander

Cape Town traffic police have had their hands full with speeders during lockdown. Among thousands of motorists breathing life into the cliché “pedal to the metal” was a 40-year-old mechanic who was caught doing close to 250km/h on the N1. JP Smith, the mayoral committee member for safety and security, said the mechanic was “taking a client’s motorcycle for a test drive” when he was “arrested after he passed a Ghost Squad officer at high speed”. Eric Ntabazalila, spokesperson for the prosecution in the Western Cape, said the mechanic, who cannot be named until he appears in court, faces a reckless driving charge. He was warned to appear on July 21. Smith said the five fastest speeds recorded between March 27 and May 24 ranged between 273km/h and 185km/h.

A deadly thunderstorm in northern India damaged sections of the Taj Mahal complex, officials said one Sunday. India’s top tourist attraction has been shut since mid-March thanks to Covid-19. “One sandstone railing which was a part of the original structure has been damaged,” an official said. “One marble railing which was a later addition, a false ceiling in the tourist holding area and the base stone of the main gate has also been damaged.” He added there was no damage to the main structure. - AFP

Tourism minister Mmamoloko Kubayi-Ngubane has announced a new R30m fund to benefit tour guides who were hit hard by the close of the industry during lockdown. Kubayi-Ngubane announced the fund during a press conference on Saturday evening. She said the fund came after a meeting with tour guides who had been neglected by the government’s relief initiatives. Currently, the department has R200m set aside as a tourism relief fund to help companies that have had to shut down due to the lockdown. Applications for that fund close on Sunday, May 31.

Hundreds of Hong Kong’s beleaguered citizens are already preparing to quit the province and flee to Britain and the West in the face of growing Chinese repression. Many of its 350,000 British National Overseas passport holders are thought to be considering requesting asylum after the imposition of controversial national security legislation tightened China's grip on Hong Kong. Dominic Raab, the UK foreign secretary, has signalled that the government will make it easier for them to work in the UK and become British citizens if they flee the region. - Telegraph Media Group Limited (2020)

'Hands off our medicine': traditional healers

Traditional healers have bemoaned their exclusion from helping the government deal with the Covid-19 pandemic, saying they have a lot to offer. Gog'Phephisile Maseko, a traditional healer and national coordinator of the Traditional Healers Organisation, said many healers had given up practising under lockdown because “they are not happy with the government, they are confused and patients that come from different provinces are not allowed to see their healers”. Maseko was recently part of a webinar hosted by the University of KwaZulu-Natal which looked at the role of indigenous healers during Covid-19. “The World Health Organisation for too long has frustrated traditional medicine and through this Covid-19, I see this as a very important and direct call to say, 'WHO, hands off traditional medicine'. They are not architects or specialists of traditional medicine. Just give it back to Africa and let Africa lead … “ said Maseko.

High temperatures and good weather have so far protected northern hemisphere countries from a second wave of coronavirus, it is thought. With mounting evidence that the virus does not spread so effectively between people outdoors as inside crowded buildings, scientists are now pointing to recent weather as helping flatten the curve of the pandemic. But fears remain that a second deadly wave could hit after the northern summer. - Telegraph Media Group Limited (2020) 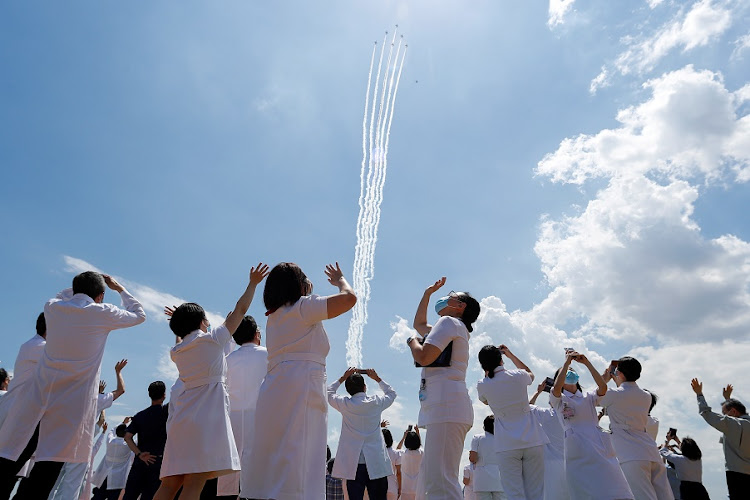