THEY'RE HOME, BUT THE FUN IS ONLY BEGINNING

It’s all about family – our own families and our great SA family, says Siya

Captain, coach and welcoming crowd at OR Tambo all determined to keep the unified World Cup spirit alive

FREE TO READ | With a deadly snake in the house and the final on, there was only one option for teens and snake catcher 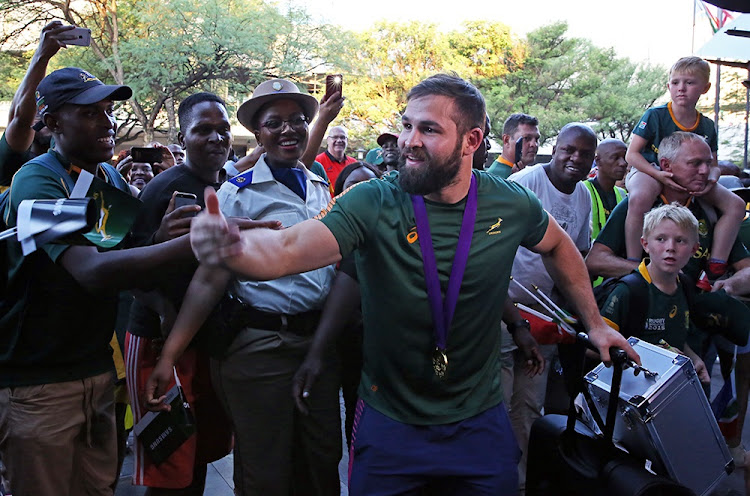 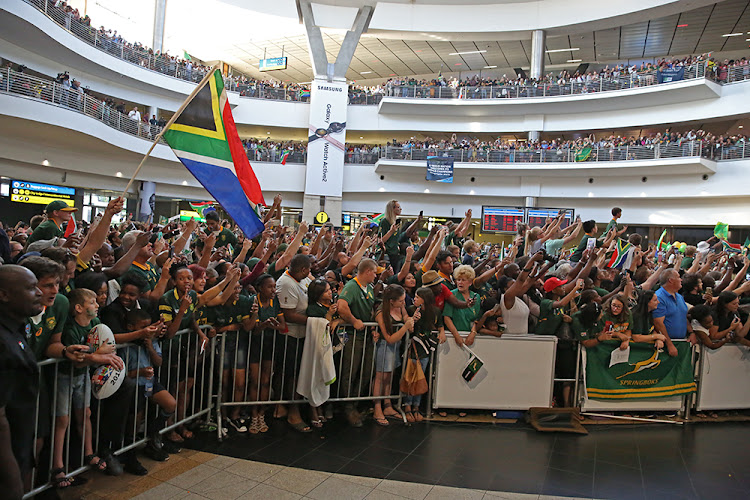 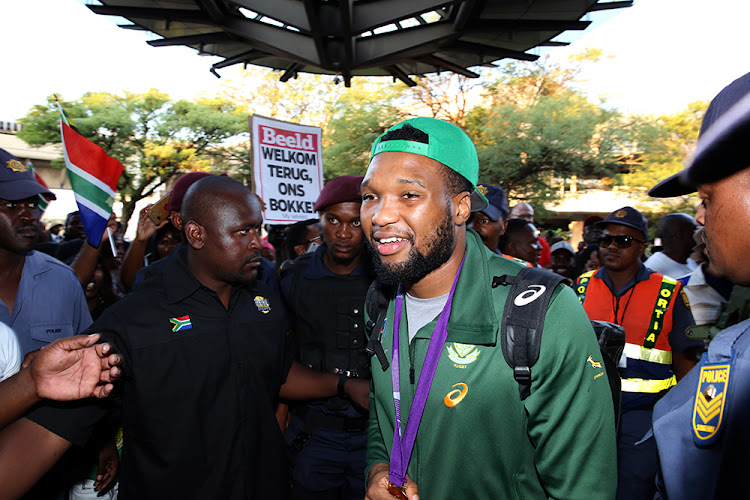 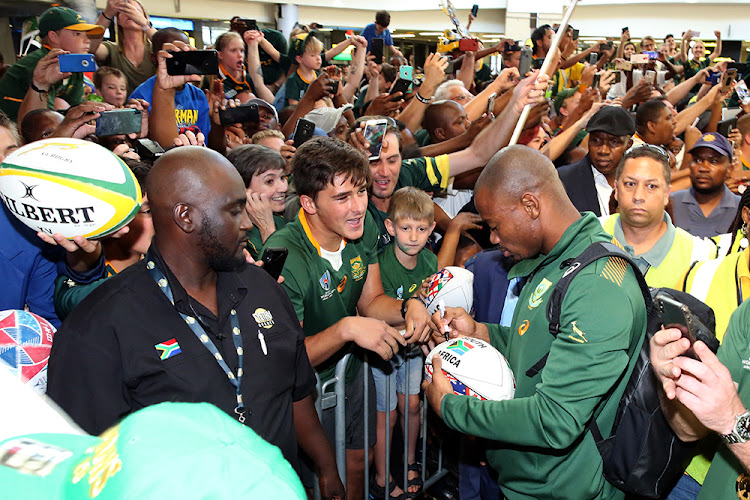 I’m too ill to testify, says Zuma, and Zondo can do nothing about it

The BLF sideshow is over, so there’s a screaming sock puppet for hire

Andile Mngxitama’s party has blathered its last, but don’t count out someone with a deep passion for getting paid

Will coal truck-torching protesters push Eskom over the edge?

Jellyfish may be a global solution to plastic pollution

FREE TO READ | Its mucus is key in the microplastics battle, and will hopefully clean up the creature’s image as well

climate of destruction Extinction Rebellion activists spread an oil-like substance at the entrance of Africa Oil Week to protest against climate change at the Cape Town Convention Centre on Tuesday.
Image: Esa Alexander

Insults were hurled at a former Post Office employee accused of raping and murdering UCT student Uyinene Mrwetyana when he appeared in court on Tuesday. “You have killed her, you have killed us,” people shouted from the packed gallery at the Wynberg Magistrate’s Court as Luyanda Botha, 42, emerged from the holding cells. Botha faces charges of rape, murder and defeating the ends of justice. He did not apply for bail. The court heard that the investigation had been completed. The case will be transferred to the high court on November 15. The state has alleged that Mrwetyana was bludgeoned with a scale after being lured inside the post office in Claremont in late August. Prosecutor Rodney de Kock said after Botha's appearance that he took gender-based violent crimes very seriously, and would tackle this one with all the hard work it deserved.

Motorists to get fuel-price reprieve

SA motorists will pay a little less for fuel on Wednesday, as lower oil prices offset a depreciating rand in October. In Gauteng, 95 and 93 octane unleaded petrol will drop by 13c a litre, while diesel will decrease by 14c-16c. Illuminating paraffin will cost 23c less. Lower oil prices offset a slight depreciation in the rand during the period under review, the Central Energy Fund said late on Monday. A litre of 95 octane petrol will cost R16.08 a litre in Gauteng from Wednesday, which still represents an almost 30% rise from January. From April, motorists had to fork out an additional 15c for the general fuel levy and 5c for the Road Accident Fund. In June, a carbon tax of 9c a litre for petrol and 10c for diesel came into effect.

Pietermaritzburg doctor Vidhwan Singh's body was found at the bottom of Howick Falls in KwaZulu-Natal on Tuesday. Singh, 70, had been missing for a week. He was last seen leaving his Raisethorpe surgery, and his vehicle was found in the Howick Falls parking area. Police divers and K9 unit officers formed part of a dive team that carried out the search for the general practitioner in Howick late last week. Retired K9 unit officer Jack Haskins said the body was found on Tuesday morning. “Having been with Search and Rescue for so many years, I know where to look for a body when it surfaces in the Howick area. I knew more or less where it would surface and when I spotted it I alerted the guys.”

As thousands of parents grapple with uncertainty over placements for Grade 1 and 8 pupils, the education department released the names of the 20 schools that reached full capacity on the first day of placements. Northcliff High School in Johannesburg received the highest number of applications (1,485), but can only accommodate 280 pupils. It was followed by Alberton High, also in Johannesburg, with 1,460 applications and capacity for 202. Other schools that reached capacity on the first day of placements were Hoërskool Akasia High, Rand Park High, Hoërskool President, Mondeor High, Sir John Adamson, Pretoria High School for Girls, Benoni High, Edenvale High, Greenside High, Bryanston High, Laerskool Akasia, Parktown Girls' High, and Pretoria Boys' High. On Monday, the department announced that 34,553 pupils remained unplaced at their schools of choice, with 21,000 of them Grade 8s. Education MEC Panyaza Lesufi said 391 schools had reached capacity.

Gauteng's health department recorded nearly 5,000 unnatural deaths in the 2018/19 financial year. Topping the list were gunshots, car crashes and stabbings. Kwara Kekana, spokesperson for the health MEC, said state mortuaries recorded 4,894 deaths as a result of violence. “In the last financial year, state mortuaries recorded 2,416 gunshot deaths, followed by motor vehicle accidents and stabbings, at 1,695 and 1,295 respectively,” she said. The figures reflected deaths at the scene of an incident or people who survived the initial trauma, but later died of complications at home or in healthcare facilities. Health MEC Dr Bandile Masuku said accident and emergency departments in state hospitals were busiest at month-end, with a high number of gunshot wound, stabbing and motor vehicle accident patients treated.

French arms manufacturer Thales has approached the Constitutional Court to apply for leave to appeal against the reinstatement of corruption charges against the company. The company is accused of bribing former president Jacob Zuma two decades ago, when he was deputy president. The alleged bribe was facilitated by Zuma's former financial adviser‚ Schabir Shaik.

A Scottish man has received flak after a video of him shooting a firework from his rear-end emerged on Monday. Heads of health and safety have criticised the dangerous display. 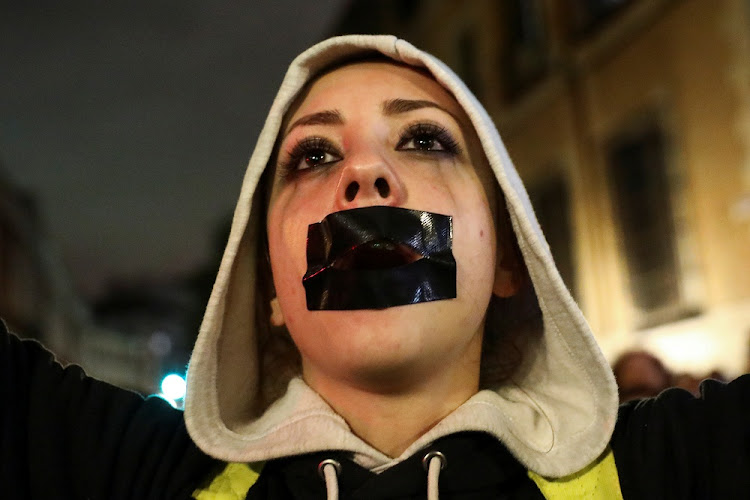 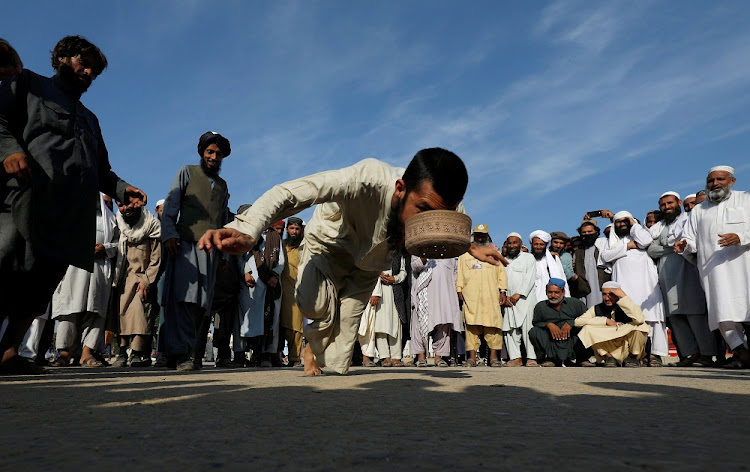 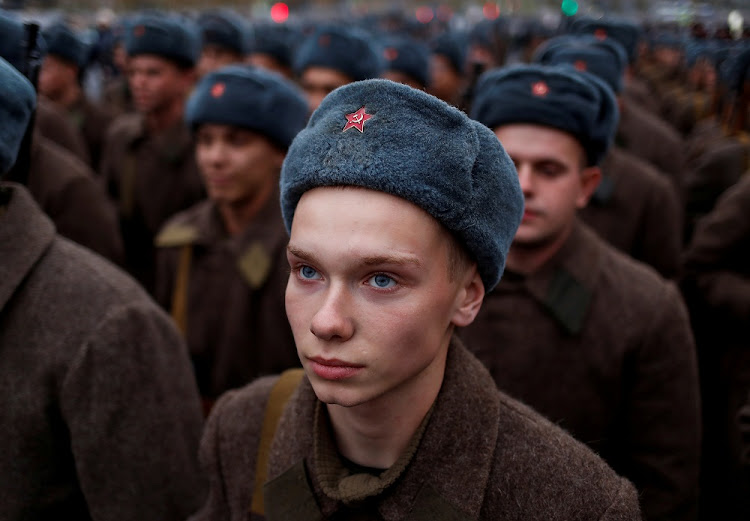 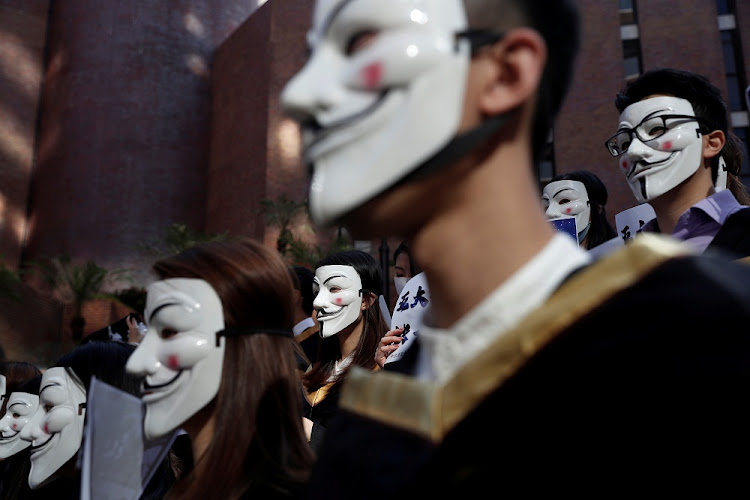 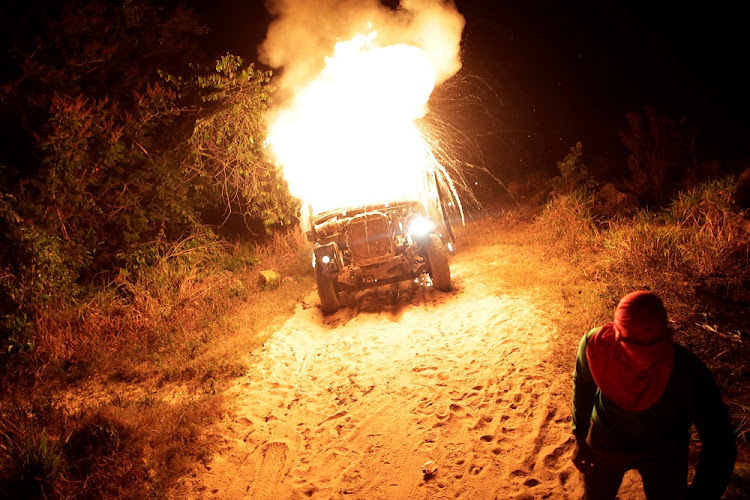 ‘Now I can die quietly,’ says woman reunited with Jews she saved in WW2

Melpomeni Dina, who hid a family from the Nazis, says she ‘would like to have saved more’

When his state wasn’t bombing Yemenis or murdering journalists, Bin Salman realised he needed to diversify the economy

Spitting in the wind: beware the DNA fitness test trap

As a medical journal questions the accuracy of genetic fitness and diet kits, we try them out - with mixed results

all her doeks in a row Hijabs for sale at a stall in Jakarta, Indonesia.
Image: Willy Kurniawan/Reuters

A New Zealand woman survived two days adrift in a tiny rubber dinghy by rationing a supply of boiled sweets and putting a red bag on her head to attract attention. Kushila Stein, 47, was eventually rescued at sea north of Crete. During her ordeal, in which she had no fresh water, the experienced sailor put plastic bags on her feet to keep warm at night and used a mirror to try to attract attention. Stein was helping a UK man take a yacht from Turkey to Athens. They reached the island of Folegandros, where Stein decided to row ashore in a dinghy. But on her way back to the yacht, she lost an oar and winds quickly pushed her out to sea. – Telegraph Media Group Limited (2019)

A little jogging goes a long way for health

Going for a run just once a week could be enough to cut the risk of early death by a quarter, research suggests. The analysis involving more than 230,000 people found those who regularly headed out for a jog - no matter how fast or far - had far lower death rates. It found even the smallest amount of running - such as one run a week of less than 50 minutes - was enough to have a significant impact on mortality. There was no evidence to suggest that doing more than this conferred a greater benefit. – Telegraph Media Group Limited (2019)

It never rains but it pours in Oz

A severe drought has broken in dramatic fashion in some parts of New South Wales, Australia, but the long-term forecasts remain grim. For the first time in 483 days, the town of Bourke has water flowing over its weir after 94mm of rain at the weekend. Key agricultural areas in the north had seen less than 1mm of rain in September. However, the northern inland region, where the drought has been at its worst, received almost no rain. – Telegraph Media Group Limited (2019)

Own a Modigliani? It’s time to worry

Italian police have uncovered a clandestine workshop allegedly producing sophisticated counterfeit paintings by Modigliani and Lucian Freud. They said that if the fake paintings and drawings had been accepted as genuine on the open market, they would have been worth “hundreds of millions of euros”. They were seized as part of a complex operation that centred on Florence, Venice and Modena. A painter in his 60s has been charged with counterfeiting. – Telegraph Media Group Limited

The air quality in the Indian capital, New Delhi, improved slightly on Tuesday as the wind picked up to blow away some of the pollution shrouding the city for days. But the air remained at the “hazardous” level in the teeming capital of more than 20 million people, more than five times the recommended safe limit of 60. – Reuters

At least three women and six children from an American Mormon community based in northern Mexico have been killed in an ambush, a relative of the victims said on Monday. Julian Lebaron said his cousin was on her way to the airport when she was attacked and shot in her car along with her four children in Rancho de la Mora, an area notorious for drug traffickers and bandits of all kinds. “It was a massacre,” Lebaron said. The affected community is made up of descendants of Mormons who fled the US in the 19th century, after being persecuted for their traditions, including polygamy. – Telegraph Media Group Limited (2019)

Uncle Sam may be the man, but for how much longer?

Stay invested in US equities, knowing that potential upside is limited, or do you get seduced locally?

Bok win is sheer gold for sponsors MTN and FNB

Value hunters cooking up something tasty in Mauritius

RAC has a reputation for buying at a discount, and could have inspired plans for restructuring Astoria

Fat hope you’ll hear the truth about fat, so here’s the skinny

Before the mid-20th century, nobody had ever thought to isolate saturated fat as the cause of disease

Catch a ride to Jeffreys Bay, it’s just a friendly wave away

When bush comes to shove, urbanites have a lot to learn

Kruger Park centre aims to inspire a passion for ecology

Sure, we’re in the pink – now to make it a long purple patch

Blasts from the past: Pumas run Boks close in ’93 thriller