Water crisis: It’s serious, but how worried should we really be?

My circumcision was botched and I don’t want other boys to suffer, says dad

Does SA have a taste for the Mashaba Method of mixing populist poison?

Gang stabbed paramedic 28 times, left him for dead. But he had other ideas

FREE TO READ | Four men attacked him as he stopped at a roadside tuck shop. That’s when his training kicked in

FREE TO READ | Some of the medicines in short supply do not have alternatives, and others have run out entirely

remains of the da New DA parliamentary leader John Steenhuisen addresses the Press Club in Cape Town over the party's leadership crisis after the resignation of their leaders.
Image: Esa Alexander

A Johannesburg man refused to become a crime statistic when he was confronted by a suspected robber. The man, from Lonehill, was returning home with his dog on his motorbike on Sunday when he was “followed” by a white Mercedes-Benz. Nationwide Crime SA shared an account, attributed to the man, on its Facebook page: After the man had parked and had his son take the dog into the house, the car pulled up “and the passenger door opened and the guy with a pistol in his hand got out. When I saw the gun I knew it was a robbery, [I] drew mine and started firing.” This spooked the “robber”, who got into the car, which sped off. Douglasdale police are investigating.

Hunt for men who broke into prison

Two suspects are at large after they broke into Voorberg prison in Paarl. A warder raised the alarm when he noticed electrical wires had been cut on one a perimeter fence. A guard then noticed two men running under one of the lookout posts. A scuffle ensued between the suspects and a warder, who managed to force the intruders to flee. He was able to seize one of the suspect's backpacks containing 350 Mandrax tablets. "The police were informed by the warder on duty that two suspects cut the electrical wires surrounding medium B prison at the sports field side of the prison," said police spoksperson Capt FC van Wyk. The bag also contained a rope and a side-cutter. No arrests had been made and police were hunting for the suspects.

Convicted rapist Nicholas Ninow's mother has told the SABC she regrets not helping her son to overcome drug addiction. Chantelle Ninow said on Sunday she felt some responsibility for her son’s actions. “I will always carry the guilt to think that my son is in jail. To think that, that night I could have done something for him, but I didn’t,” she said. The broadcaster said she was a recovering drug addict. Ninow was sentenced to life imprisonment for raping a child at a Silverton, Pretoria Dros restaurant in September 2018. During the trial he blamed drugs and alcohol. He said that “sober-minded, I would have never done such a thing to anyone, never mind a little child”. The high court heard that he had been exposed to drugs from the age of 13, allegedly by his mother.

Four people were killed during severe thunderstorms in northern KwaZulu-Natal at the weekend. According to the KZN co-operative governance and traditional affairs department (Cogta), the storms hit the uMkhanyakude district and four victims, including two teenagers, are believed to have been killed by lightning. Cogta MEC Sipho Hlomuka was expected to visit the families of the victims on Monday. He had deployed disaster management teams to help the affected families. "This is the start of the summer disaster season that has in the past devastated communities across KwaZulu-Natal. The occurrence of natural disasters is becoming more frequent due to climate change. KZN Cogta is ramping up its capacity to respond to disasters accordingly," said Hlomuka. He urged residents to follow weather forecasts and take precautions to protect themselves.

Gauteng education MEC Panyaza Lesufi, who vented his fury on Twitter over what he suspected to be an old SA flag in the crowd at the Rugby World Cup semifinal in Japan on Sunday, has apologised for being mistaken. Tourism minister Mmamoloko Kubayi-Ngubane entered the fray on Monday: “Fellow South Africans and those that tagged me. There is the video and hope it puts the matter to rest now. The next few days must be about supporting our team.” Lesufi noted a group of white SA fans with what appeared to be a blue and orange flag at the game, and said it had spoilt the occasion. “That flag, unfortunately is spoiling it! This team Springboks belongs to all of us. Let’s avoid hurting each other unnecessarily,” he tweeted. Fans quickly discovered that the group of wig-wearing “Faf de Klerk” Bok fans were in fact proudly carrying the new SA flag.

EFF leader Julius Malema has claimed it was President Cyril Ramaphosa who led to the demise of former DA leader Mmusi Maimane, not Helen Zille, who was recently elected DA federal council chairperson. Malema was speaking on Monday at the Nasrec Expo, where the EFF will hold its second elective conference in December. He said powerful individuals who funded the CR17 campaign that catapulted Ramaphosa to the ANC's top position in December 2017 were the same people who fund the DA. These funders, he claimed, wanted the DA to be soft on Ramaphosa's presidency, but Maimane had defied them and this led to him being pushed out. Malema said he knew this because some of the DA funders had told the EFF they would get funding only if they worked together with Ramaphosa.

A man refused to become another SA statistic when he was confronted by robbers on Sunday. The man, when noticing a car parking aggressively, pulled out his gun and started firing, spooking the suspects. 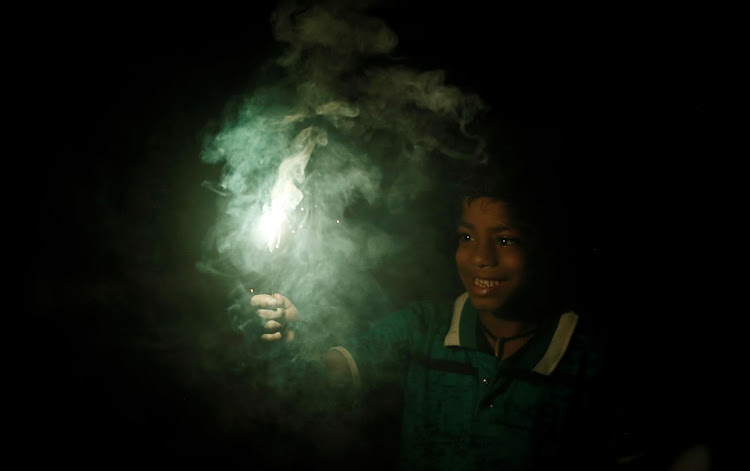 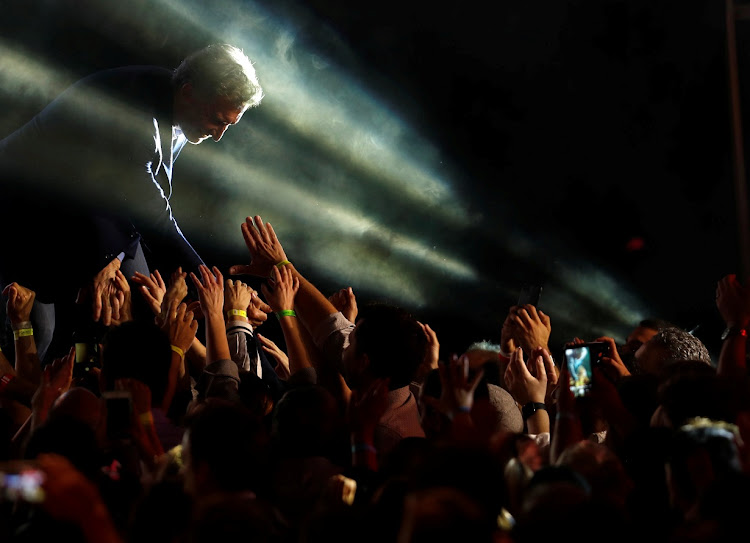 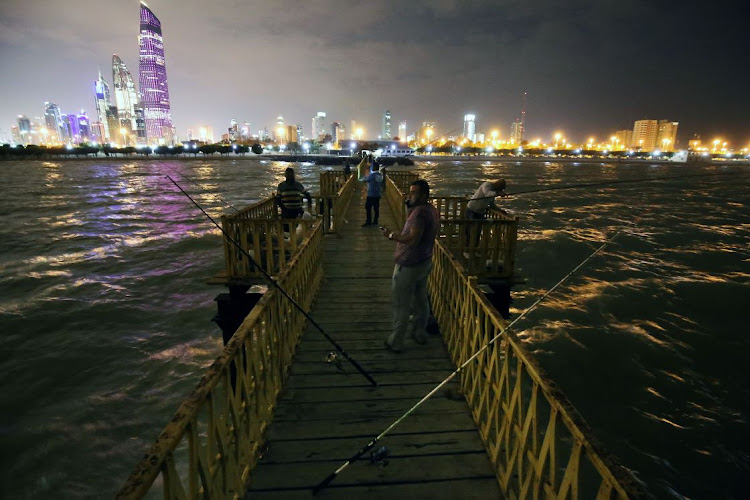 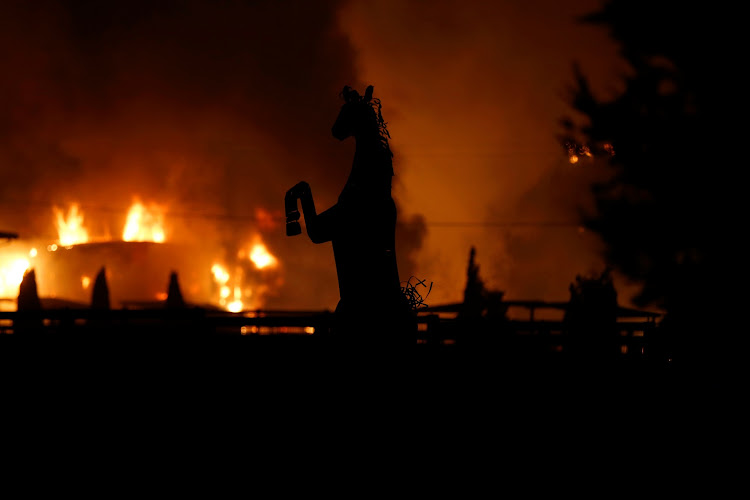 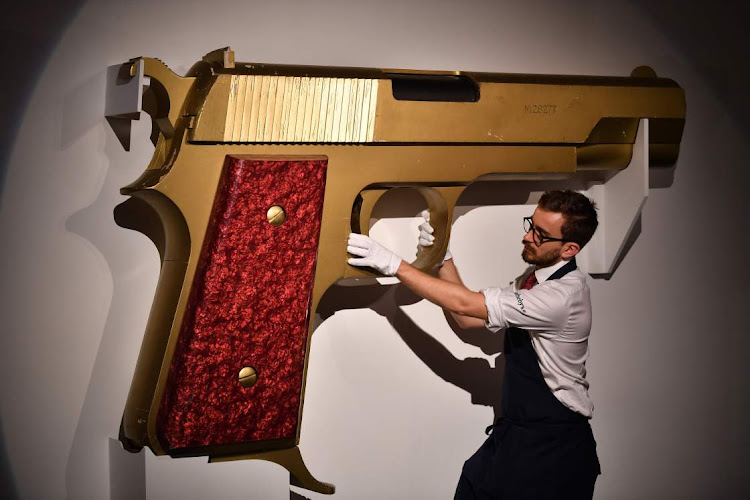 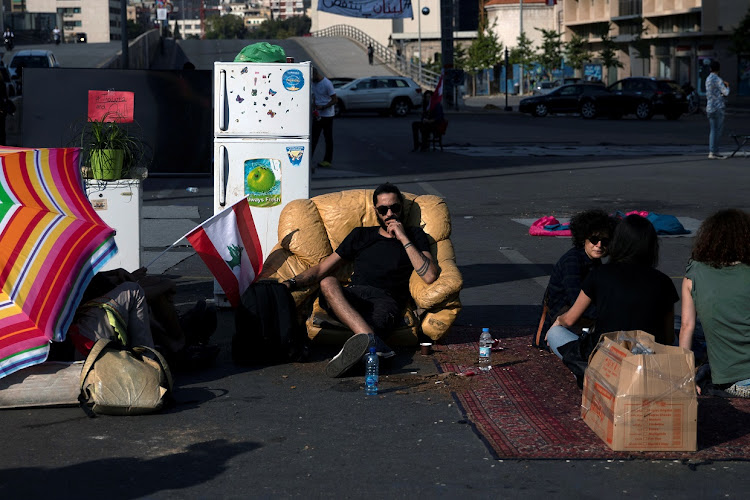 The IS figurehead is dead, but his horrific ideology lives on

Dressed to kill: Will the queen’s ‘AK47’ cause the death of royal mystique?

Stream of conscience: your Netflix habit is an eco no-no, say experts

Watching a half-hour show leads to emissions of 1.6kg of CO2, the equivalent to driving 6.28km

Master’s piece on the side: ‘Van Dyck had secret affair with Rubens’s wife’

A British railway company said on Monday it was helping a renowned violinist track down a 310-year-old violin he accidentally left on a train. Southeastern, which runs commuter services to London, is working with police to try to locate the instrument, worth a reported £250,000 (R4.7m). Renowned musician Stephen Morris accidentally left the violin, which was made by Roman master craftsman David Tecchler in 1709, on a suburban train last Tuesday. The company added its staff and officers from the British Transport Police were reviewing security camera footage from the train as well as stations. Morris was due to play the violin while leading the Royal Philharmonic Orchestra in two Andrea Bocelli concerts at the weekend, according to the BBC. – AFP

Australia’s most notorious serial killer, who murdered at least seven people including two British tourists, has died in prison at the age of 74. Ivan Milat, who was convicted in 1996 of the murders of seven backpackers, died of stomach and oesophageal cancer early yesterday in Long Bay prison's hospital wing, Sydney. Anthony Roberts, the New South Wales corrections minister, said Milat "can rot in hell". While Milat maintained he was innocent to the end, police suspected his involvement in a number of other disappearances, including three young women in Newcastle, New South Wales, in the 70s. He was serving seven life sentences for the murders of British women Caroline Clarke and Joanne Walters; Deborah Everist and James Gibson, a couple from Melbourne; and three German backpackers, Gabor Neugebauer, Anja Habschied and Simone Schmidl. – © Telegraph Media Group Limited (2019)

A girl, 11, jumped on the back of a crocodile and gouged out its eyes as it was trying to eat her friend near their homes in northwestern Zimbabwe. Rebecca Munkombwe, a schoolgirl in Hwange town, 320km northwest of Bulawayo, rushed to a stream at the sound of screams. Her friend, Latoya Muwani, 9, was struggling to stay afloat as the crocodile latched its jaws around her. Rebecca jumped on to the creature and dug her fingers deep into its eyes, she told the local Sunday News. The crocodile loosened its grip on Latoya and slipped away under the water, allowing Rebecca to drag her friend - who only suffered minor injuries - to the bank. Rebecca said: "I jumped on top of the crocodile and started beating it with my hands before using my fingers to poke its eyes." – © Telegraph Media Group Limited (2019)

A 67-year-old woman has given birth in China, a hospital said on Monday, with the parents claiming they are the country's oldest couple to conceive naturally. The woman, surnamed Tian, delivered a healthy girl by Caesarean section on Friday, Zaozhuang city's Maternity and Child Health Care Hospital said. "The child was bestowed on the two of us by heaven," Tian's 68-year-old husband, surnamed Huang, told Chinese news site guancha.cn. Tian told Jinan Times she only discovered she was pregnant when she went to the hospital for a health check, adding: "I didn't want it, initially." The hospital said it could not confirm that Tian had conceived naturally since she was already pregnant when it took her as a patient. The Global Times reported the child was called Tianci (gift from heaven). – AFP

Race to save tot stuck in 26m well

Scores of workers were racing against time on Monday to try to rescue a two-year-old boy trapped for more than 72 hours down a 26m well in south India, officials said. The boy fell into the 30cm-diameter pipe on Friday afternoon while playing near his home in the Tiruchirappalli district of Tamil Nadu state. A thermal camera was briefly used to monitor the child's body temperature while oxygen was supplied through a pipe. The toddler, Sujith Wilson, was unconscious but breathing until Sunday morning, but rescuers have been unable to check his condition since then. Authorities said the child was initially wedged at about 9m before slipping to the bottom in an upright standing position. – AFP

A whale shark's mouth might not seem like the most hospitable environment for a home, but Japanese researchers have found there's no place like it for a newly discovered shrimp-like creature. The tiny podocerus jinbe are a variety of gammaridea, a species known for their hardy ability to live in environments ranging from high mountains to the deep sea. But lead researcher Ko Tomikawa, an associate professor at Hiroshima University, said he was "surprised" to find them living in the mouth of an animal. Gammaridea are a type of crustacean, a group that includes water fleas. The researcher said the new variety has a brown-coloured body of about 0.5cm long and hairy legs, which help catch organic substances for food. – AFP

To break into new markets or get ranked in the top 10 players, you have to do something different

Don’t give us this ‘concerned’ nonsense, show us action

What will it take for cops to get tough on crime at mines?

‘Bassie: My Journey of Hope’: Of frogs, princes and Madiba

‘The Space Between Us’: Lost in the layers of perception

Don’t change a thing, Rassie, even if it’s just for kicks

Blasts from the past: Four for Ntini as SA wallop Pakistan