SA is in crisis and the ANC is a write-off. So, where is the outrage?

The 10.2 million jobless are docile in this state of emergency, but beware the ticking time bomb of radicalisation

No money to stock schools’ libraries and labs

No, you can’t have an LGBTIQ club, top school tells pupils

Beware! With invoice scams, you’re on your own

‘Each time I see a soldier, I am so scared,’ says Zim shooting victim

It’s a year since the 2018 shooting by members of the Zimbabwe National Army. The scars still run deep

The appalling truth of avoidable deaths in SA, in black and white

It’s ‘us’ versus ‘them’ as SA backs Caster Semenya

At the core of the research are tectonic shifts, without which life on Earth would not exist

There is an idea that we're being squeezed out by our own species, but the truth is somewhat more counter-intuitive

Why watching the painstaking restoration of the tragic pharoah's 4,000 treasures was doubly poignant

They wrote it this week: A cheeky mistress, and Trump is cheap

BLACK AND BLUE A catholic faithful smeared in burnt oil at the opening of the 10-day celebration of the Santo Domingo de Guzman festival in Managua.
Image: Inti Ocon/AFP

There have been no arrests or disciplinary action against staff who downed tools and trashed Charlotte Maxeke Johannesburg Hospital in a dispute over bonuses more than a year ago. Gauteng health MEC Bandile Masuku confirmed this in a written reply to questions by DA MLP Jack Bloom in the provincial legislature. "I am outraged at the inexcusable delay in disciplinary and police action even though 16 employees were identiﬁed by the CCTV cameras, and are still working for the hospital," Bloom said on Sunday. "How can it be that workers who threatened others and caused damage of more than R3m are still working for the hospital? During the protest, black bags containing rubbish ranging from paper to half-eaten food were emptied along the hospital corridors, rocks were used to disrupt ambulances transporting patients and tyres were burnt in front of the facility.

A light plane crashed in western Tanzania on Saturday, killing two South Africans who had been involved in last month's successful attempt to fly a home-built aircraft from Cape Town to Cairo, officials said. The crashed Sling plane, which entered Tanzanian airspace from Uganda en route to Malawi, made a distress signal about engine failure before disappearing from radar, according to the Tanzania Civil Aviation Authority. "The pilot and passenger, both South African citizens, were killed in the plane crash that occurred shortly after take off from Tabora airport at around 7:30am," Sikonge district commissioner Peres Magiri told the ITV television station. The plane was destroyed by fire and only the engine and some other parts were recovered. It was owned by an SA organisation, U-Dream Global. On the group's Facebook account it said the crash involved the flight support aircraft for the Cape to Cairo Challenge and that project directors, Des Werner and Werner Froneman, lost their lives.

There has been a shortage of contraceptives in Zimbabwe since the gradual withdrawal of international family planning partner organisations in the past three years. At one time the freely available Marvelon oral contraceptive pills were being smuggled into SA for resale. Hospital staff in Zimbabwe would sell the pills for an equivalent of R5 to dealers who would sell them in SA for three times as much. The Zimbabwe National Family Planning Council (ZNFPC) received most of its free supply from the UN Children's Fund (Unicef). Now, only the International Planned Parenthood Federation supplies Zimbabwe's health ministry with contraceptives such as birth control pills, and injectable contraceptives, while private pharmacies charge extortionate prices for them.

Three armed men stormed into a Pep store, stole money and locked staff inside the cash safe at Northam in Limpopo. But their escape was foiled after a car chase and shootout on Saturday, which left two of them wounded. The gang ordered staff and a security guard who was there to collect cash to lie on the floor. "The suspects took his [the security guard's] company firearm and instructed the Pep store staff members to open the business safe," said police spokesperson Brigadier Motlafela Mojapelo. "After emptying the safe both the security official and the staff were locked inside the cash safe. The police were alerted and the available information, including the suspected vehicle was immediately operationalised in the area," The getaway vehicle was spotted and during the ensuing chase two of the suspects were shot and injured while the third was cornered and arrested.

Eskom’s senior managers – who earn R1.5m to R3m a year – are taking the power utility to the Commission for Conciliation, Mediation and Arbitration because they have not been given a salary increase in the past year. Rapport newspaper said on Sunday that between 180 and 200 senior managers wanted a retroactive increase of 4,7% - the same as that granted to middle managers. Deon Reyneke, deputy director of trade union Solidarity, said should senior management’s demand be implemented, it would cost the power utility an additional R200m to R300m per year. Eskom just posted a whopping R20.7bn loss in the year to end March and is being kept afloat, in the short term, by huge government bailouts.

A jogger was left bleeding after allegedly having a rock thrown at her on the walkway between St James and Muizenberg in Cape Town on Sunday. The suspect was chased and caught by civilians in the vicinity, according to a post shared on the public Kalk Bay Village Facebook page. It was not immediately clear if a criminal case had been opened. 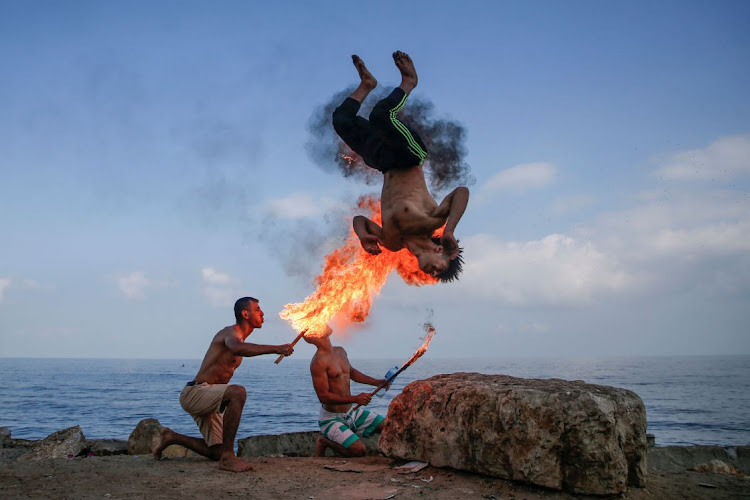 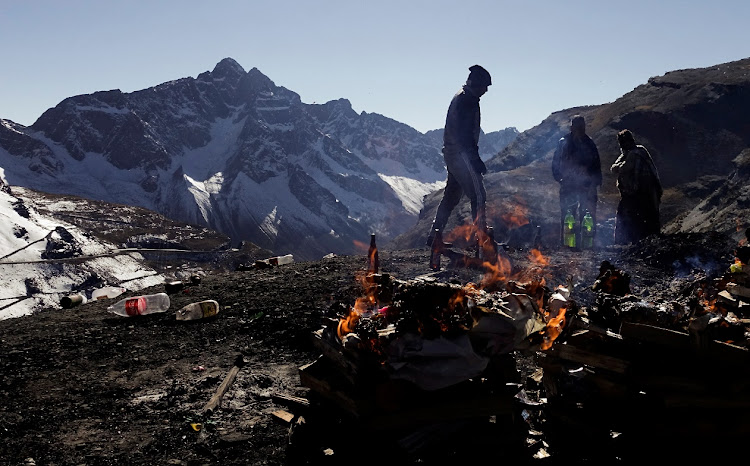 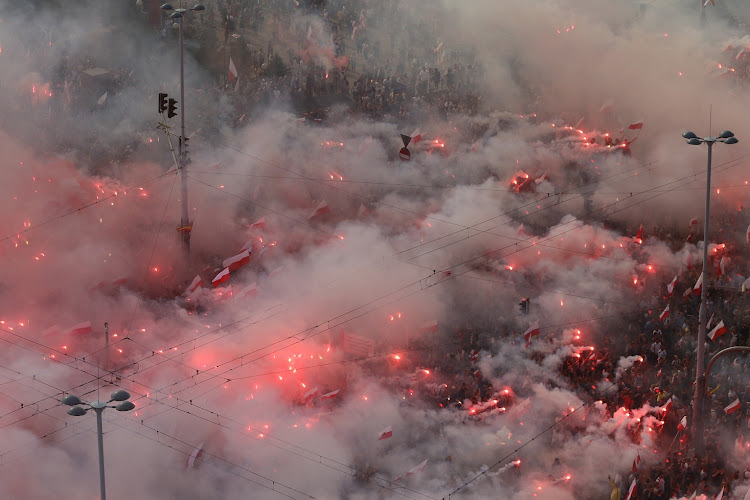 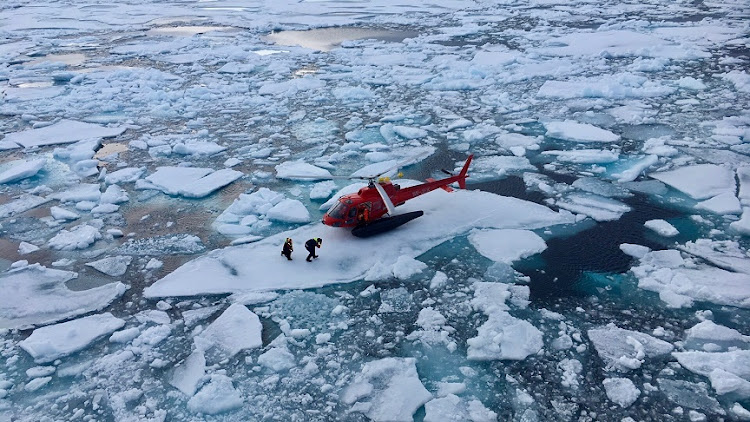 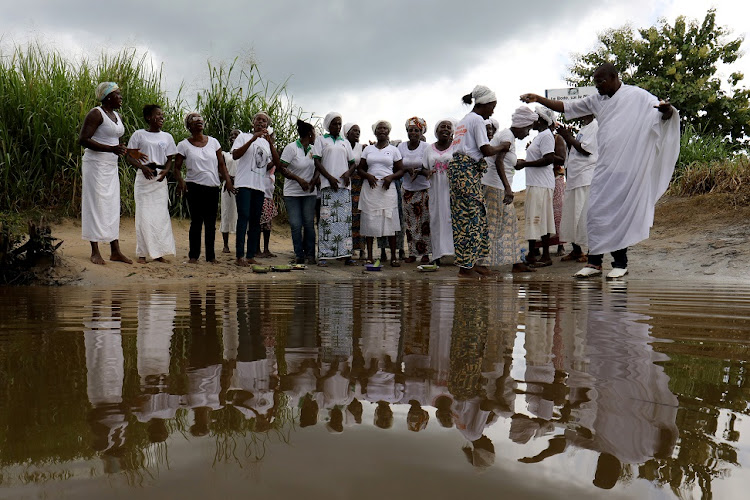 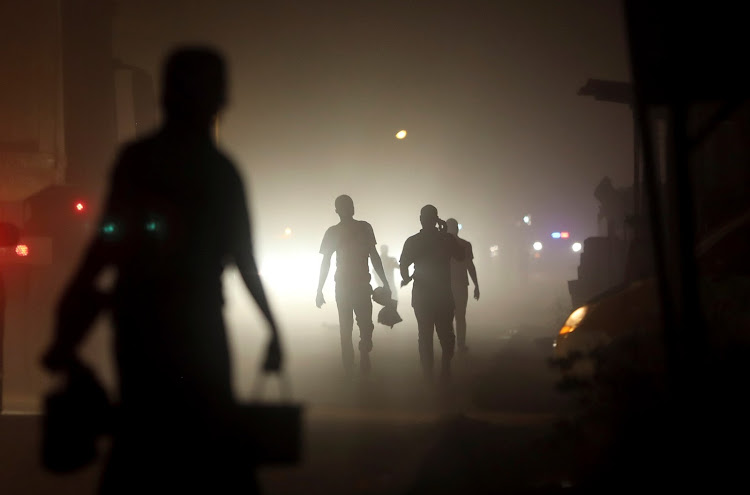 Dear Democrats, you’re about to lose to Trump again. Here’s why

US politics has become a tribal, all-or-nothing affair, and that suits the orange menace just fine

‘You just go through hell’: white Zim farmers’ wait for payouts drags on

The president has promised compensation over land grabs, but for some it is already too late

A dark choc to the system can help brighten your mood

Dark chocolate lowers risk of depression, study suggests, although there is a worrying caveat

HOME IS WHERE THE HEAT IS The Mahoneys and friends sit on the road in front of their home, amid the construction by Foxconn after they refused to sell their property to the company, in Mt. Pleasant, Wisconsin.
Image: Reuters/Brian Snyder

Only black Republican in House to quit

Will Hurd, the only African American Republican serving in the US House of Representatives, has revealed he will not seek re-election in 2020. The Texas congressman said that he will “pursue opportunities outside the halls of Congress to solve problems at the nexus between technology and national security”. Hurd’s district stretches along the US-Mexico border and has repeatedly flipped between Republicans and Democrats in recent decades. He only narrowly hung on to the seat in the 2018 midterm elections and would have faced a tough challenge from the defeated Democrat in that race who is running again. – Telegraph Media Group Limited (2019)

Another breakthrough for Saudi women

Saudi Arabia will allow women to travel without permission from a male guardian, the government has announced. A series of decrees announced late last week will allow women over the age of 21 to apply for a passport and travel freely, as well as giving them more control over family affairs, making them eligible to be legal guardians to children, register births, marriages and divorces, and be issued legal documents rather than having a male guardian do so on their behalf. – Telegraph Media Group Limited (2019)

Swimming to lose weight might be counterproductive because cold water stimulates your appetite. A new study found that jogging, rather, was the best way to lose weight for people with “obesity genes”. Researchers found that mountain climbing, walking, power walking, certain types of dancing and long yoga practices were also good for people predisposed to putting on weight. But cycling, swimming, stretching exercises and active games such as Dance Dance Revolution do not counteract the genetic effects on obesity, the findings suggest. – Telegraph Media Group Limited (2019)

Man flies over Channel on hoverboard

A Frenchman who has spent years developing a jet-powered hoverboard zoomed across the English Channel on Sunday, after a first attempt last month was cut short when he fell into the water while trying to refuel. Franky Zapata set off on his “Flyboard” from Sangatte on the northern coast of France for the 20-minute trip and landed at St. Margaret's Bay in Dover, on England's south coast. - AFP

Keeping your pals will stop dementia

Maintaining a healthy social life in middle age could prevent the onset of dementia, a new study suggests. Researchers found that a person who saw family and friends on an almost daily basis had a 12% lower risk of developing conditions such as Alzheimer’s disease. Around seven people in 100 will develop dementia after the age of 65, but scientists say that could be cut to six in 100 if people spent more time with their loved ones. – Telegraph Media Group Limited (2019)

For months he has kept out of the public eye, his former star status languishing under a cloud of notoriety following allegations of sexual assault. But late last week Kevin Spacey broke cover in Rome for a very pointed poetry reading about a wounded performer determined not to succumb to the blows he endures. Spacey read Gabriele Tinti’s poem “The Boxer”, about an exhausted fighter used for entertainment then left bleeding by the ringside. The poem contains the lines: “They used me for their entertainment, fed on shoddy stuff. Life was over in a moment” and “The more you're wounded the greater you are”. – Telegraph Media Group Limited (2019)

Booming informal sector is a boon in a jobs bloodbath

Big firms are no longer the biggest employers, but the untapped potential of the informal sector is vast, if unleashed

Down with fiefdoms: creating jobs is a task for all state departments

Food facts that may be a little hard to digest

The essence of likes: Instagram says no to popularity contests

It's testing a new feature that hides the number of likes. Is it so it can get a bigger share of the influencer market?

Screen into the void: ‘Load rage’ is a thing with kids these days

Can Solskjaer dig Man U out of their rut? He’d better

If they can't challenge at the sharp end of the Premier League, the knives could be out for the manager