The Eskom cull must happen, and ANC’s allies need to get out of Cyril’s way

These airlines cancel your return ticket if you miss a flight

Disabled CrossFit whizz does it all, and she’s only begun

Isle aisle: ‘For life’ on Robben Island ... a life of wedded bliss

Where darkness once reigned, all was light as 21 couples got hitched. We found out their stories

The equines have been freed after a bitter, month-long collateral dispute

How jailed SA smuggler could have helped to save rare birds

Christians get a new saint just when they need him most

The pope's latest canonisation is good news in a time when being religious is viewed as a bit loopy, or even sinister

Can you ‘Marie Kondo’ a loved one? How do you declutter painful memories?

But in sifting through all the things my little sister left behind when she committed suicide, I also found peace

I got over myself at 50, and life started looking up again

After my first full year in my 50s, I have to say that the research is right: I'm a contented cliché

Bushiri’s lawyers fight for him to keep his jet

Self-proclaimed prophet Shepherd Bushiri’s private jet is subject to an application of attachment by the Asset Forfeiture Unit. The Hawks said on Sunday the application for the R20m jet to be confiscated was part of the government's investigation into the Malawian pastor and his wife, Mary, according to news reports. The founder of the Enlightened Christian Gathering Church and his wife are facing fraud and money laundering charges. The contravention is in relation to exchange control regulations allegedly involving foreign currency of $1.1m (about R15m). They are out on bail and are due to return to the Specialised Crimes Court in Pretoria in May.

Two brothers were abducted from their home in the early hours of Sunday, with one - a prison warder at Lady Frere - being murdered during the attack by three suspects, police have confirmed. The brothers, aged between 35 and 45, were sleeping when the attack occurred between 3am and 4am at their homestead in the Dapu administrative area of the Eastern Cape. After tying one of them with ropes, they were forced into the car, said Captain Namhla Mdleleni. The attackers drove in the direction of Cala. "When they approached Cala, they stabbed the prison warder to death and assaulted his brother." They then dumped them in open veld. The brother who survived managed to reach members of a nearby community, who helped him get to hospital. A case of murder and kidnapping was opened. The vehicle was found on a road to Mthatha.

Teacher ‘locks up pupils for not paying R2’

An investigation is under way after a teacher allegedly penalised several Grade 1 pupils by confining them to a classroom for not having R2 on casual day. The incident occurred last week at Abedare Primary in Delft where some pupils were locked up as punishment for not having the money, while others were released to attend an activity in the school hall. Western Cape education department (WCED) spokesperson Bronangh Hammond said the allegation was concerning. "The WCED received a tweet regarding the incident and a request for follow-up was made … The alert happened over the weekend, therefore the WCED will investigate tomorrow [Monday]," she said.

A set of freshly cut rhino horns, a hunting rifle and ammunition were seized from four men - including a SANparks employee – in the Kruger National Park at the weekend. The four are between 23 and 47 years old. SANparks officials had received information about the suspects who were reportedly about to exit the park in two vehicles. Officials pounced, aided by a SANparks chopper that landed on the road to block the fleeing vehicles, said police. The four will appear at the Bushbuckridge Magistrate's Court on Monday, facing charges including illegal hunting, possession of a hunting rifle and ammunition without a licence, and trespassing.

The University of Cape Town has distanced itself from a Pan Africanist Student Movement of Azania poster after a photograph of it was shared on social media. Virologist Ed Rybicki spotted the poster, which advocates anti-white sentiment. He tagged the university, saying: "An example of the kind of elevated academic discourse at our university. In the window of the student cafeteria next to the courtyard in the faculty of health sciences." UCT said it was not aware of the poster. "The university distances itself from the language used in this poster and will get the relevant department to take appropriate action on this matter," it said. Former students of the respected and liberal university shared their dismay at the rhetoric espoused by the poster.

Police have arrested Yusuf Saloojee, a former SA ambassador to Iran, on corruption charges related to the awarding of a cellphone licence to MTN after it was initially given to Turkcell Iletisim Hizmetleri. The case has been the subject of legal claims for several years by the Turkish company, which accuses MTN of paying bribes to SA and Iranian officials to secure 49% of Irancell Telecommunication Services in 2005, which gave it a licence to operate in the country. MTN has always denied the charges. Saloojee, 75, was seized by the Hawks over allegations that he facilitated the cancellation by the Iranian government of the Turkcell licence, which was then awarded to MTN. Saloojee, now retired, allegedly pocketed R1.4m for his role, which the Hawks say was used to buy a house in Pretoria.
THIS CEO IS A SHOE-IN T-Mobile US CEO John Legere testifies before a US House committee hearing in Washington DC.
Image: Reuters/Erin Scott 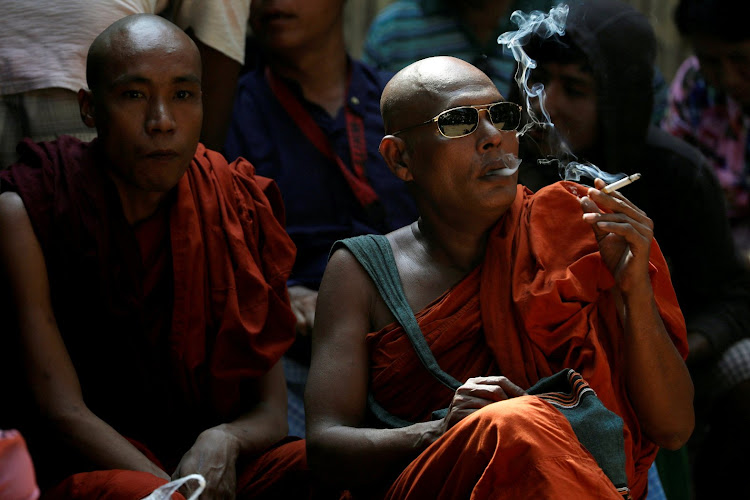 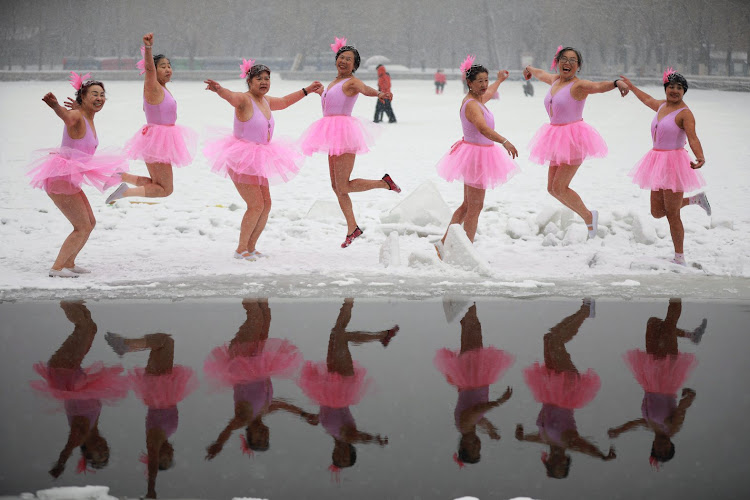 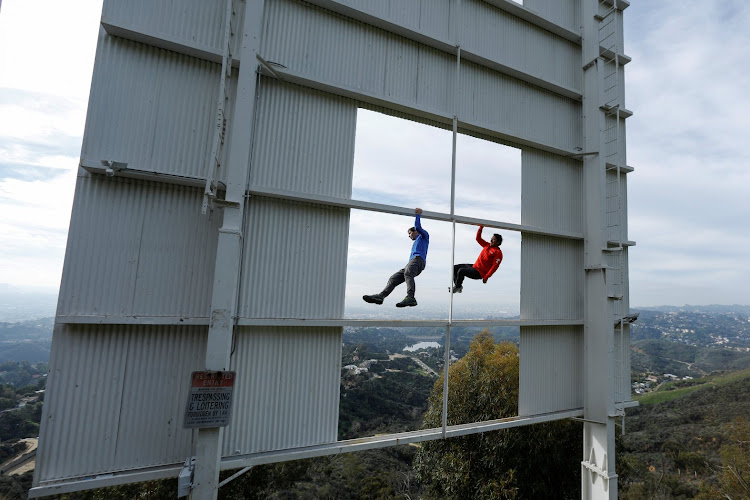 ‘It was like a normal life, with bombs’: inside the mind of a jihadi bride

Their brains were warped by a barbarous ideology, but what were the motives of young women who joined Islamic State?

And the barf bag goes to ... if only Oscars still lasted just 15 minutes

Does anyone actually care about this love-in for smug, posturing hypocrites? PLUS: The worst-ever Oscar speeches

Ever wondered what it feels like to be attacked by a big cat? Read on

Now we’ve definitely heard it all: a feelgood 9/11 musical

It tells the story of a plane grounded in a small town after the tragedy, and the five days that changed 100s of lives

French schools are to replace the words ‘mother’ and ‘father’ with ‘parent 1’ and ‘parent 2’ on documents under a new amendment passed by MPs. Supporters say it will stop discrimination against same-sex couples, but critics argue it ‘dehumanises’ parenthood. Conservative lawmaker Xavier Breton said: ‘When I hear people say this is an old-fashioned model, I would remind people that today among unions celebrated, civil or marital, some 95% are man-woman couples.’ - The Daily Telegraph

Yet another Oz surfer bitten by shark

A 41-year-old surfer was airlifted to hospital on Sunday after being bitten in the leg in a suspected shark attack on Australia's famed Byron Bay. ‘I was freaking. When I heard the screams he was making in the water and then I saw a chunk of his board floating off, that's when I realised it was pretty bad,’ a fellow surfer said. The victim managed to float back to shore on his board and signalled to other beachgoers for help. He is said to be in a serious but stable condition. – AFP

Something fishy about ‘anti-gay’ attack on actor?

Chicago police have shifted the direction of their investigation into ‘Empire’ star Jussie Smollett’s report of a homophobic assault and are seeking to interview him again. Smollett, 36, an openly gay African-American, ignited a furore on social media last month when he reported he had been attacked on the street by two men yelling racial and homophobic slurs. On Wednesday, police said they arrested two Nigerian brothers. The pair was freed two days later without charge in light of ‘new evidence’ from their interrogation. Police at the time denied detectives were looking into whether Smollett had staged the attack. – The Daily Telegraph

In Germany, insects now have rights too

Germany plans an insect protection law to slash use of pesticides and pump tens of millions of euros into research, Environment Minister Svenja Schulze said on Sunday, as global concern grows over mankind's impact on the crucial invertebrates. ‘We human beings need insects; they deserve to be protected with their own law,’ she said. Germany will also stop covering new land with concrete for roads or home construction until 2050, and limit light emissions at night to avoid disorienting the six-legged creatures. - AFP

We’re hair to honour our ancestors

Girls with large headpieces made from the hair of their ancestors and wearing intricately patterned dresses danced in isolated villages in southwest China late last week to celebrate the Lunar New Year. Onlookers watched - smartphones in hand - as the women swirled across a meadow, wearing dresses and jackets embroidered with pink roses and geometric patterns. But it was the towering black headdresses of the dancers that really stood out - made from wool, string and the hair of their ancestors, and wrapped around animal horns with white fabric. - AFP

Lebanon has appointed the Arab world’s first female interior minister in its new government, prising open a wider foothold for women in its overwhelmingly male political scene. Raya al-Hassan is one of four women to take cabinet jobs in the new coalition, more than ever before in Lebanon and three more than in the last government, in which even the minister for women was a man. ‘This is a point of pride for all women and all the people who believe in women's capabilities,’ Hassan said. - Reuters
A ROCK FROM A FELLA A man proposes marriage to his girlfriend, who said yes, at the Rockefeller Center in Manhattan.
Image: Reuters/Carlo Allegri

Cash-strapped carrier needs to cough up R1.1bn after competition case, but is banking on yet another bailout

New investment vehicle will seek out opportunities across sub-Saharan Africa, but will be focused on SA

The turducken of messenger apps is a pointless answer

If life doesn’t kill you, climate change will

A difference of 0.5°C won’t only wipe out polar bears and whatnot, it’ll bring deadly diseases and drought

Don’t touch that ‘Leonardo’ for Louvre nor money!

SPORTS DAY: I’m with Caster on this one, says Martina

SA should have won, but Perera and Fernando refused to acknowledge their apparently impending defeat

Blasts from the past: Karen Muir beaten Fairlie and square