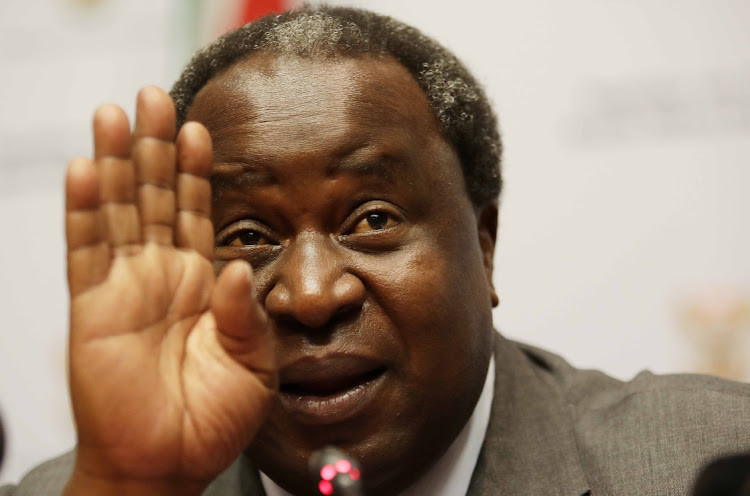 Steady hand We are lucky to have Tito Mboweni and the national Treasury still intact.
Image: Esa Alexander

The idea of a sovereign wealth fund made its way into popular discourse in 2012 after the ANC Youth League (ANCYL), then led by Julius Malema (now leader of the EFF), pushed strongly for the nationalisation of mines.

These positions had been advanced by the youth wing at the ANC’s national general council in late 2010, when, as part of its package of policy proposals, it demanded the amendment of the Mineral and Petroleum Resources and Development Act (MPRDA) to “allow greater state participation in exploration, extraction, production, processing, trading and beneficiation of mineral resources in SA”.

While Malema and other ANCYL leaders were expelled from the ANC in early 2012, the debate over the appropriate role of the state in the economy continued to rage within the ANC and the EFF.

The rationale of the youth league was that state ownership of mineral resources would help increase its fiscal capacity, establish a basis for industrialisation and contribute to enhancing the country’s economic sovereignty, and that this would deliver transformative value in tackling unequal spatial development.

SA is a deficit economy, and there is not much to be harvested through net exports given that the trade balance has averaged 0% of GDP.

The idea of introducing the Expropriation Bill to enable the expropriation of mineral resources and the formation of a state mining company also emerged during this ideological contestation within the governing party.

The ANC released its document in March 2012, dubbed “state intervention in the minerals sector”, as a response to the radicalisation of its youth wing and as a way to burnish its own leftist credentials. One of the proposals was a call for the establishment of a state mining company.

It also recommended that a sovereign wealth fund be formed and funded through a resource rent tax (what other countries call a super-profit tax). According to this proposal, the fund would have a component that invested in long-term projects, with another component acting as a fiscal stabilisation fund to manage revenue instability in times of commodity price decline, thereby acting as a countercyclical tool.

Finally, it envisaged the creation of a mining development fund that would support the development of human settlements and infrastructure in mining areas.

Various countries in the world use sovereign wealth funds as government investment vehicles funded through foreign exchange assets and managed separately from official reserves. The Norwegian sovereign wealth fund is the largest, at more than $1-trillion. It is largely funded through proceeds from resource rent tax on oil and gas projects. One of Norway’s long-term objectives is to diversify from oil and gas to build a thriving knowledge-based economy as well as charting a future in clean energy.

Tito is a national treasure. Now he just needs Cyril to back him

On the African continent, an example of a sovereign wealth fund is Botswana’s Pula Fund, which was established in 1993. It invests proceeds from minerals for the benefit of future generations, acts as a long-term fund and is part of the country’s foreign exchange reserves. Botswana enjoys surpluses in the balance of payments on the back of diamond exports.

Most sovereign wealth funds are capitalised through foreign exchange assets from current account surpluses, earnings from natural resources on the back of high commodity prices, or excess reserves.

SA is a deficit economy, and there is not much to be harvested through net exports given that the trade balance has averaged 0% of GDP while the services and income balance has been in deficit over the past five years. The country also lacks oil resources, though in February 2019 French oil giant Total announced the discovery of gas off SA’s coast that has a potential value of as much as R1-trillion that could be the source of royalties to fund a sovereign wealth fund.

SA has missed out on the fat seven years of the commodity supercycle from 2004 to 2011, a period during which many resource-rich countries bolstered their sovereign wealth funds.

The mining industry has suffered years of policy neglect and is convalescing. Over the years, it has been throttled by high input costs, erratic energy supply and regulatory uncertainty, which have caused some mining companies to divest from the country.

We have yet to see a country that forms a sovereign wealth fund based on the hope of future fiscal surpluses, as proposed by Mboweni. It is bad policy to pronounce on a sovereign wealth fund in the middle of an economic crisis. These are institutions that should be formed in good times so they can play a countercyclical role in fiscal policy. SA lacks export competitiveness and has suffered a current account deficit of 3.7% of GDP over the past decade.

SA has missed out on the fat seven years of the commodity supercycle from 2004 to 2011, largely as a result of a lack of supportive policy measures, deficient energy supplies and underinvestment in infrastructure. This is a period during which many resource-rich countries bolstered their sovereign wealth funds. Between 2010 and 2019, mining companies paid billions of rand in state royalties, which the government did not ringfence but used as part of the national income.

Today, and possibly for the next decade, SA will find it hard to create a stabilisation fund when the commodities sector is not doing well and the export sector is flat, though if managed properly, the gas discoveries could be a source of revenue. There are many unknowns.

None of this is to suggest SA should never have a sovereign wealth fund, but putting this in a budget vote in the middle of an economic crisis is premature, especially when the institutional detail is missing.

‘Windfall tax’ on mines would do shareholders a disservice

Key success factors for sovereign wealth funds are a sound institutional framework, good corporate governance and strong capabilities or excellent management – all dimensions that have been lacking in the state if we look at the condition of our state-owned enterprises (SOEs), state-owned asset manager the Public Investment Corporation, which has backed questionable deals in recent times, and some of the development finance institutions that were in the past undermined by governance failures.

Having a sovereign wealth fund will not address the immediate economic challenges faced by the country, especially because they have a long-term horizon and will not fix policy uncertainty or the poor political choices that are at the core of SA’s economic and institutional underperformance.

Beyond ideological positioning and populist signalling, it is not clear how the finance minister will craft the proposed sovereign wealth fund institutionally, and with what governance and accountability structures. When you make such a big proposal, you have to have a credible plan in place because expectations are high.

Perversely, this announcement could open doors to those who may see such an entity as an avenue for corruption. Imagine a populist faction of the ANC coming to power in 2024 or earlier and citing Mboweni’s budget vote to justify using a sovereign wealth fund to accelerate radical economic transformation as a cover for another round of looting.

Decisionmakers have to be careful about the future implications of the decisions they take today. There are many challenges the government should be directing its energies to: fixing institutions; improving governance at existing SOEs; reimagining the role of development finance institutions to achieve greater development objectives. The idea of a sovereign wealth fund is a distraction – it is unrealistic both now and in the medium term.

• Qobo is head of Wits School of Governance (designate) and Soko professor of strategy and international business at the Wits Business School.

Tito is a national treasure. Now he just needs ...

‘Windfall tax’ on mines would do shareholders a ...

Can we bank on boy wizard Tito to prevail against ...

Not only Tito needs smart tips for the end of the ...

Robbing workers in broad public daylight won’t do the job